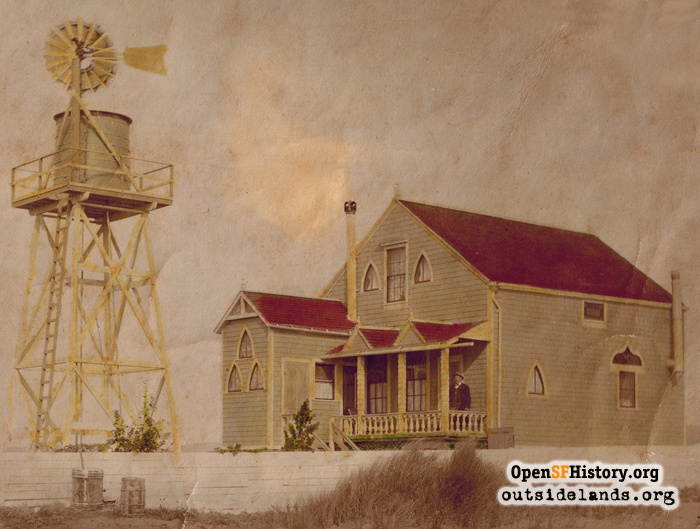 a history of one of the Outer Sunset's oldest homes 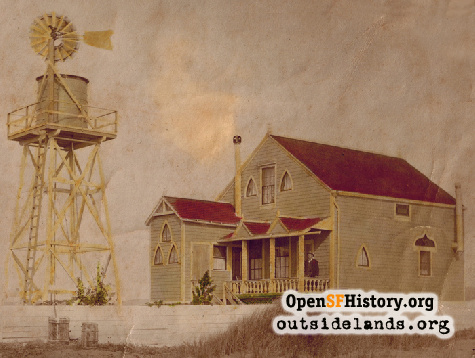 George Winterburn in turn sold the lot and house to John M. Loane in 1903 for the sum of $1360. The house was a 2½ story structure. According to family lore, he used the property as a retreat for himself and his lady friends. His wife, Louisa Edgar, had died in December of 1891. Family lore says that the original arched windows and other wood objects came from ships wrecked off the coast and washed up on shore. 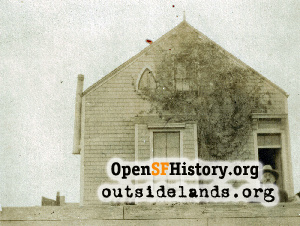 John Loane and his brother, Abraham Loane, my Great Grandfather, came to San Francisco in 1860 to try their fortune. The Loane family had migrated from Ireland to Philadelphia in 1850.

John Loane died in August of 1912 at age 79. As he was childless, the property was passed on to my Grandmother, Mabel Loane Donohue (John Loane's niece). She and my Grandfather, Peter Donohue, a veteran of the Spanish American war and Philippine Insurrection, and their daughter, Maebelle C. Donohue, born June 1907, moved into the house shortly after John's death. They had been living with my Great Grandfather, Abraham Loane, at 1530 Golden Gate Avenue, near Scott, after losing their apartment to the 1906 Earthquake and Fire. The house at 1530 Golden Gate still stands some 108 plus years old. 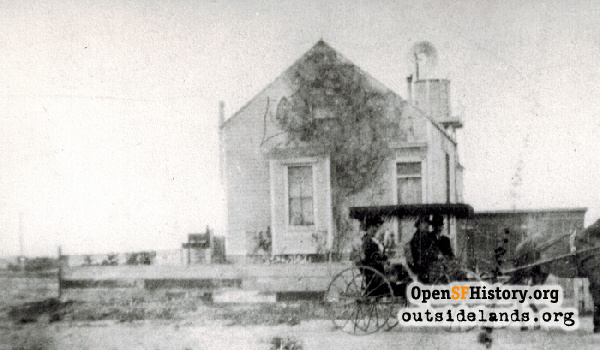 My Great grandfather, Abraham Loane, had purchased the house on Golden Gate Avenue some years after returning to San Francisco from Philadelphia where he had been recuperating from the effects of being a prisoner of war at Andersonville Prison. He was a member of the California Hundred, 2nd Massachusetts Cavalry, and had been imprisoned from July of 1864 till wars end in April of 1865. He married Mathilda Scott in Philadelphia and returned to San Francisco in 1866.

My Grandmother's brother, Albert Scott Loane, was a frequent boarder at the house, he was a muleskinner during the Philippine Insurrection and served as a Merchant Mariner til retirement. He died at the house in January of 1935. 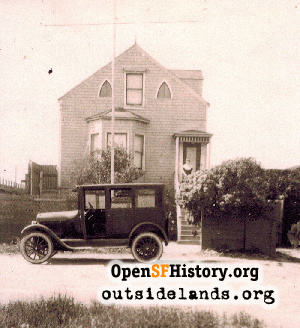 Larry Rogers poses on the front porch of his home at 47th and Santiago. The family Essex out front. -

My parents, Maebelle Donohue Rogers and William Gilbert Rogers were married in December of 1926. I was born in January of 1928. We moved around various parts of San Francisco finally moving into a little cottage on Funston Avenue (13th, just off Lincoln Way} where we lived until 1933 when, due to the economics of the time, we moved in with my Grandmother at 2275 47th Avenue. I was five years of age at the time. I grew up with the sand dunes to the east and the ocean to the west. By this time, thru changes that I don't know about, the house became a full three stories and over the years we moved up and down. My Grandmother would occupy the third floor and we would occupy the first floor, then for what ever reason we would switch. The last move found us on the first floor and my Grandmother on the third floor.

Shorty Roberts lived on the street (48th) behind us, as did my piano teacher. The Robert's stables were just down the street on Rivera between 47th and 48th. I remember helping to feed the horses a mixture of molasses and oats, I think. Roberts at the Beach was right there on 48th and just down the street was Taits At The Beach. As a child it was called the haunted house. I remember sitting on the lawn across the way from Taits as it burnt to the ground. The Zoo was within walking distance and the roars of the lions could be heard. I remember during the early war years soldiers practicing beach landings and my Grandmother, who always had a big pot of coffee going on the wood stove, not understanding why she could not serve the soldiers coffee. 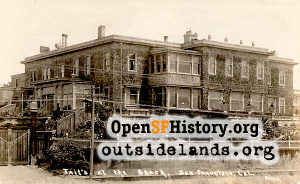 There was always the horse drawn junk wagon, the horse drawn fruit and vegetable man, the ice man, all got their fair share of that coffee. From the third floor I had a perfect view of the ocean and the ships. A tradition at the house on 47th was a tall flagpole. Originally it stood just in front of the house, but when I lived there it had been moved to just right of the front stairs. When I graduated from Parkside Grammar school in 1942 and moved on to Lincoln High school I was able to see from the third floor windows of the school the flag, which I had raised that morning. As an aside, my mother and her brother both attended Parkside when it was on Taraval Street.

All of this ended in 1948 when my folks moved across Taraval to 2446 46th Avenue. I say ended because for reasons unknown to us then or now, the City Fathers in their wisdom decided to notify my Grandmother that the house was condemned. That's why my Mom, Dad, Sister, and I moved over to 46th Avenue. My Grandmother was able to stay a little longer, she moved to the first floor. The upper two floors were then occupied by various tenants. When my Grandmother finally moved out we all sat back and waited for the wrecking crews to come. It never happened. The only wrecking came when the double car garage, that my folks had built on the adjacent lot which had been the site of an earlier shed and workshop, was torn down and a new house built.

Although the original house still stands, it looks quite small now and doesn't have the character it once had. May it continue to stand.