City Beautiful for the Phoenix 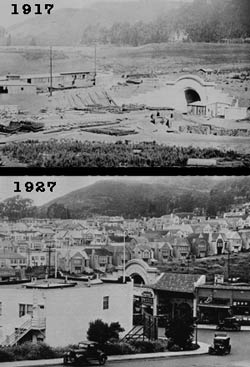 When the rancho was put up for sale, the City was desperate to recover from the 1906 earthquake and fire. City boosters badly wanted to compete with subdivisions being built on the Peninsula and in the East Bay. Transit improvements, including proposed streetcar tunnels to open up the undeveloped area west of Twin Peaks, were given high priority. City Engineer Michael O'Shaughnessy built the Twin Peaks streetcar tunnel directly under the rancho in 1918, breaking the barrier that had divided San Francisco for so long. The tunnel was the spark that ignited growth west of Twin Peaks. But this time, growth would be planned and housing developments would look very different from the rest of San Francisco.

Architecture and city planning had evolved since Sutro bought Rancho San Miguel during the Victorian period. New and sometimes conflicting styles in architecture and design were flowering. The Craftsman or Arts and Crafts movement, the Chicago school, the prairie style of Frank Lloyd Wright and the Beau-Arts were all in vogue. One thing in common was that it was no longer acceptable to pack houses tightly together on narrow lots, nor to lay out streets on rectangular grids up steep hills as was done in Victorian times.

Instead, a new aesthetic---popularized by the Burnham plan of 1905---called for respecting the contours of the land; incorporating landscaping and park-like settings into residential developments; and providing for grand boulevards, parks, and neoclassical ornaments. 51

When the prominent developer A.S. Baldwin surveyed Sutro's former rancho in 1910, he recommended that the new ideas be used in developing it: detached houses, villa size lots, curvilinear streets, landscaping and exclusively residential uses. With no property owners to deal with and no structures, streets or facilities to move or condemn, planners had a free reign to implement these ideas.

The first neighborhoods to be developed show the purest expressions of the new ideas, St. Francis Wood and Forest Hill. 52 St. Francis Wood was developed by Mason-McDuffie in 1912 with designs by John Galen Howard, Henry Gutterson, Julia Morgan, and Bernard Maybeck. Mark Daniels laid out Forest Hill in 1913, featuring works by Maybeck and others. 53 In the mid-1920s when Westwood Park was being built, the bungalow style was popular, and the area now boasts the finest collection of bungalows in San Francisco.

The cohesive design of these neighborhoods makes them appealing today and unique in San Francisco, where it is has always been difficult to carry out large-scale projects. In later decades, newer housing developments on the former rancho were less influenced by City Beautiful ideas, although they did retain the lower densities and natural street contours favored by the early planners.

What would have happened had Sutro sold the land before he died? Without a convenient way to get over (or through) Twin Peaks, the land was not valuable for homes. For example, proposals failed to develop Lakeview, Ingleside and Lake Merced in the late 1800s. 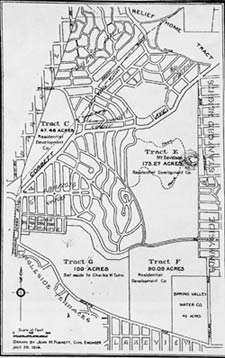 Nonetheless, farmers undoubtedly would have built houses, barns, dairies and related structures---and the City would have built roads to reach them---on rancho lands. As the last single owner of a great expanse of property, Sutro prevented piecemeal development. He unwittingly achieved one of the goals that he called for as mayor---beautifying the City through tree planting:

"To beautify the City is a duty of every citizen. Tree planting in front of every lot in the residential parks, whether already built upon or not should receive more attention. Dracaenas, acacias and cypress are fine ornamental trees well adapted to our climate and young plants can be bought for a mere trifle. The former, by its resemblance to the palm tree, will give life the city a tropical appearance... Gardens in front of dwelling homes and the cultivation of flowers elevate the tastes of our inhabitants." 54

Sutro's legacy rests on more than his forest or Baths. 55 He provided farmland that helped feed the City during its early days, created a green belt in the center of town, and enabled new ideas in city planning to take root west of Twin Peaks.

(This article original appeared in The Argonaut, Journal of the San Francisco Museum and Historical Society, Volume 14, No.1, Summer 2003.)


Images: 1) West Portal showing the tunnel entrance in 1917 and 1927. The tunnel was rapidly built in the 1920s and it looks very much the same today. (Greg Gaar collection). 2) The subdivision plan for Rancho San Miguel. Forest Hill and St Francis Wood are laid out. The other streets are speculative. Fernando Nelson will purchase Tract C two years later and build West Portal. (Mae Silver, Rancho San Miguel, page 85). (Click here or on map to see larger version in a new window.)

53. Mark A. Wilson, "Mason-McDuffie and the Creation of St. Francis Wood", The Argonaut, Journal of the San Francisco Historical Society, Fall 1997.

55. Sutro's name lives on in schools, ruins, mountains and even a TV tower, but the name of his ranch, "San Miguel", has all but disappeared. The UCSF student housing complex in Sutro Forest on Clarendon is named after it, and a two-block street in the Ocean View district, on the western edge of the old rancho, bears the name San Miguel. The street is near the site of the San Miguel Station, a stop on the San Francisco and San Jose Railroad (later Southern Pacific) that ran along the Interstate 280 and BART right-of-way.