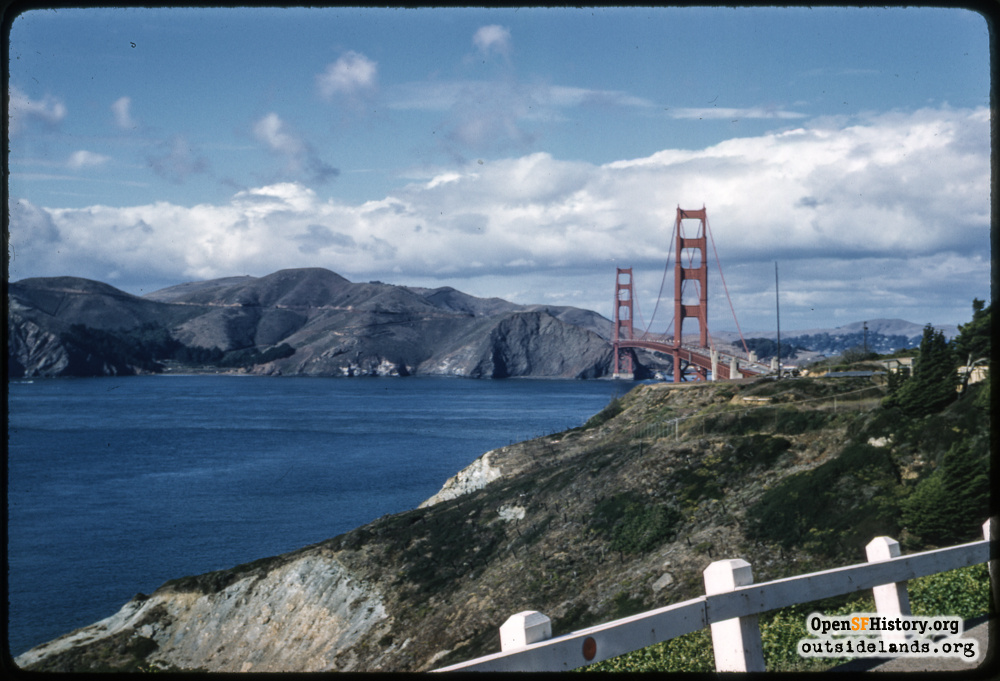 Streetwise: Birth of a Bridge

The story of the creation of the Golden Gate Bridge.

Streetwise - Birth of a Bridge

From the mid-1840s, when Captain John Fremont declared California’s independence from Mexico, local land speculators were eyeing the hills of today's Marin County, and wondering just how the area could be linked to the community of Yerba Buena, as San Francisco was then known—for both public and personal benefit. A bridge was the ideal solution, but the swift currents and the depth of the waters at the entrance to San Francisco Bay, along with other factors, presented insurmountable challenges for decades.

By 1868, regular ferry service was established between the City of San Francisco and the Marin County town of Sausalito. Then in 1869, Joshua Norton, a bankrupt miner who declared himself “Emperor of the United States and Protector of Mexico,” began making the first public calls for bridges to span San Francisco Bay and link to the adjacent counties. His outlook was generally regarded as being somewhat wild, but he maintained his position until his death in 1880.

By 1872, however, big business was beginning to listen to all the talk about bridge building. Charles Crocker of the Central Pacific Railroad announced preliminary plans and cost estimates for a suspension bridge across the Golden Gate that would also carry rail cars. Although debated for many years, those plans never came to fruition, for a variety of both engineering reasons and cost considerations. Political and economic factors also played a role in the delay—there was a global financial panic in 1873 that ran for nearly six years, the even-worse Panic of 1893 (triggered by overbuilding of railroads), and finally, the Spanish-American War of 1898.

The topic of bridge building surfaced again early in the twentieth century, but before plans became serious, the earthquake and fire of 1906 refocused the attention of San Franciscans on rebuilding their city. Another financial panic spread throughout the U.S. in 1907 and city leaders were then focused on having the city ready for the Portola Festival in 1909, and then for the subsequent 1915 Panama-Pacific International Exposition, thus further diverting both attention and funding. 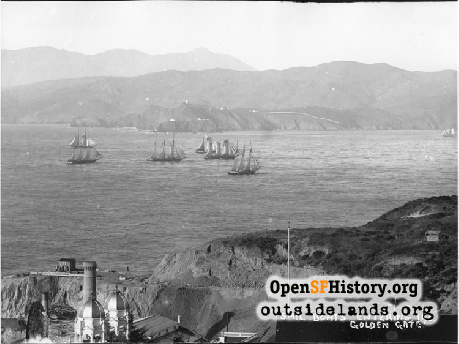 Taken from Sutro Heights, the Sutro Baths and Point Lobos are visible., circa 1900 - (Courtesy of a Private Collector)

Finally, in 1916—just 100 years ago—James Wilkins, a journalist for the San Francisco Bulletin newspaper, who was also a trained engineer, called for construction of a span linking San Francisco and Marin Counties. His proposal recommended a center span of 3,000 feet, which was twice the size of any bridge in existence at the time. The estimated cost of such a project was a staggering $100 million (well over $2 BILLION today.)

Late in 1918, San Francisco Board of Supervisors member Richard Welch led a movement to request that the United State government take soundings in the San Francisco strait—the channel separating the southern tip of Marin County from the Presidio of San Francisco. Surprisingly, the United States Congress acted quickly, and studies were completed by 1920.

Soon, city engineer Michael M. O’Shaughnessy partnered with Cincinnati-born engineer Joseph Strauss, who was doing business in Chicago. By 1921, the pair was convinced that they could build a bridge with a 4,000-foot center span at the entrance to San Francisco Bay, at a cost of not more than about $30 million. O’Shaughnessy made this plan public in 1922. One year later, in 1923, an organizational meeting was held in Santa Rosa, the largest town in the counties directly north of San Francisco, and the “Association of Bridging the Gate” was formed. Later that same year, the California state legislature passed the “Golden Gate Bridge and Highway District Act" to manage the project.

Still, there were delays. As the legal owner of the land on both sides of the opening to San Francisco Bay (the Marin Headlands and the Presidio of San Francisco), the U.S. War Department (now the Department of Defense) was also involved, and in late 1924, the Secretary of War granted permission for construction to begin. Planning activities continued as Strauss consulted with other engineers, and in 1928, the Golden Gate Bridge and Highway District (consisting of representatives from San Francisco, Marin, Sonoma, Del Norte, and parts of Mendocino and Napa counties) was finally incorporated, with their first meeting held early in 1929, and with Strauss soon being appointed Chief Engineer.

Although the stock market crash occurred in October 1929, ushering in the Great Depression, dedication ceremonies were held just two months later to mark the commencement of borings for both the north and the south towers of the bridge. Design activities continued, and in August 1930, Strauss submitted his final proposal for the structure. In November of that year, voters in the counties making up the bridge district approved bonds for the construction (145, 657 in favor and only 46,954 against). Engineering studies continued and financing details were hammered out, until finally, on January 5, 1933, official construction began. 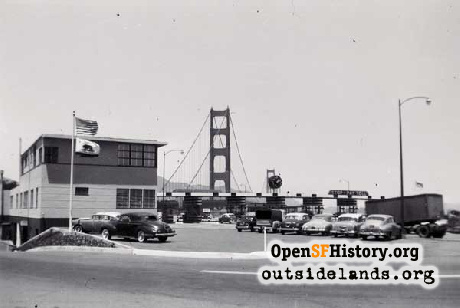 As the foundations were laid, surrounded by protective fenders, San Franciscans were soon treated to the magnificent sights—ever-changing each workday—of the two towers beginning to rise above the waterline. From 1934 through 1937, construction continued, with impatient residents constantly asking, “Aren’t they ever going to be finished?” Doyle Drive, named for Frank P. Doyle (President of the Santa Rosa Chamber of Commerce and an early proponent of the bridge), curved through the Presidio grounds, leading motorists into downtown San Francisco when the new bridge was dedicated in May of 1937.

Surprisingly, though, the original plans did not include direct access to the new bridge from the south. All traffic to the Golden Gate Bridge was routed through the central part of the city—along Van Ness Avenue and Lombard Street, onto Doyle Drive.

Bridge engineer Joseph Strauss himself is credited with the plans for the Presidio Tunnel, now known as the MacArthur Tunnel, constructed beneath a hill on the grounds of the Presidio’s golf course. Built by the California Division of Highways (predecessor to Caltrans) in 1938-39, the excavated soil from the tunnel’s construction site was unceremoniously dumped into a marshy area of Mountain Lake—something that would never be permitted today. It remains a classic example of Art Deco and Streamline Moderne architecture, though one wonders if architect and engineer Strauss would approve of the seasick green (previously an olive green shade) that has been used in recent decades to paint the exterior concrete portions of the structure just north of Lake Street.

Park Presidio Boulevard itself, running from Lake Street south to Fulton Street and the entrance to Golden Gate Park, was the one-time site of a large development of post-earthquake cottages known as Camp Richmond. From its days as a refugee camp in 1906, Park Presidio evolved into a quiet north-south street, as seen in photos after the camp had been closed.

By 1939, a center divide had been added, but there was still no direct connection to the bridge. The Call-Bulletin reported on February 11, 1940, that “the $1,300,000 Park-Presidio approach to the bridge” (including a tunnel under the Presidio’s golf course) was about to open. By June of 1941, the roadway had markings delineating two lanes of traffic in each direction, with streetlights added to the center island. Originally, traffic along this new roadway was controlled by “boulevard stops” that allowed free-moving north-south traffic, as motorists heading east-west yielded to stop signs—though a traffic light was soon added at Geary. Finally, a post-World War II widening reduced the width of the planted area adjacent to the roadway, thereby adding a third lane in each direction, with traffic signals at every intersection.

Ah, but things were still not complete. As the economy surged after the war, more and more drivers were on the road. The State of California envisioned a series of intersecting freeways covering San Francisco moving traffic about. One component of the plan, the Western Freeway, was essentially a straight line from San Francisco International Airport to the Golden Gate Bridge. If implemented, it would have cut a wide swath through the western neighborhoods, destroying thousands of homes and businesses in the name of progress. Fortunately, the people of San Francisco reacted, setting into motion the “Freeway Revolt” (See Streetwise: Dad & Bill’s Night Out.)

As BART plans unfolded in the early 1960s, there was a brief moment when high-speed trains were envisioned on the lower deck of the bridge, coming into San Francisco near 25th Avenue in the Richmond District and then running into downtown by way of Geary Boulevard. Many factors (engineering questions about whether or not the bridge could support BART trains and tracks, community opposition in some North Bay communities, and Marin County’s ultimate decision to withdraw from the BART district) derailed these plans completely.

Doyle Drive, the bridge’s primary connection to San Francisco, was recently replaced with a new parkway-tunnel roadway that winds through the Presidio—yet still retaining the original street name. The old roadway might have been adequate in 1937, but it was overcrowded and outdated by the early 1950s. Tragically, it was the site of the worst-ever auto accident in San Francisco history back in July of 1970—one that eventually claimed twelve lives. None of us who were coming of age in San Francisco at that time will ever forget it. (See the WNP message board posting In the Blink of an Eye)

So happy 79th birthday, Golden Gate Bridge—you have done many great things for our city, but those of us in the western neighborhoods remain very grateful that the planned 19th Avenue-Park Presidio Drive approach named the Western Freeway never came to pass.