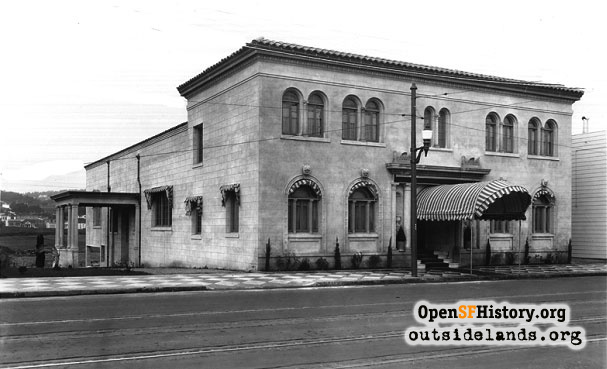 The closing of a long-term San Francisco funeral home.

With little fanfare, yet another multi-generation family-owned business in San Francisco has closed its doors. Funeral directors Valente, Marini, Perata have long been serving the needs of the community, but the business was quietly shut down in July 2017, after nearly 130 years in operation.

Originally located in North Beach, the firm—founded in 1888 by Virgil Valente, Frank Marini, and John B. Perata—was a cornerstone in the Italian community. By 1926, the owners took note of the fact that many of their long-time customers were re-locating to the Excelsior District during the two decades after the 1906 earthquake and fire. The firm then opened a branch on outer Mission Street near Onondaga Avenue. In the 1950s, a larger, modern structure was built at the site, along with an expansive parking lot to accommodate the post-World War II shift from streetcar to automobile travel. Follow this link to a YouTube video showing details of the interior and exterior of the Mission Street facility. 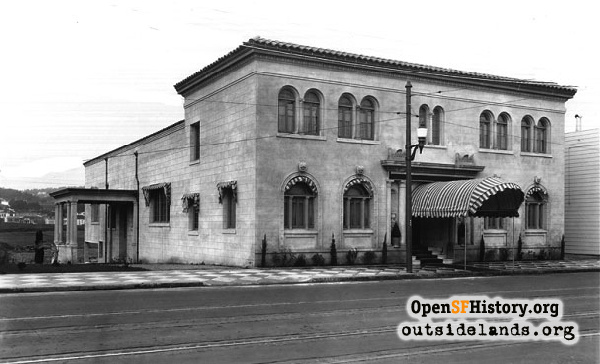 Even as the company’s historical Italian customer base began moving to other parts of San Francisco and into the suburbs, a telephone call to Valente, Marini, Perata was still the first thing that many families did upon the death of a loved one. Over the years, the company also began to adapt to demographic changes by gearing its services to the Latino and Filipino families who lived nearby, and until the very end, it remained a frequent provider of funerals and memorial services to members of local Catholic parishes, including St. John the Evangelist, Corpus Christi, Church of the Epiphany, and Our Lady of Perpertual Help in Daly City. (Author’s note: At the 1989 funeral of an old S.I./USF classmate, services began at 4840 Mission Street and then proceeded to St. Ignatius Church at Fulton Street & Parker Avenue—one of most circuitous funeral processions that most of us had ever seen. Think about it—there is simply no direct route from the Excelsior District to the northeast corner of Golden Gate Park!)

Matt Taylor, a 5th generation member of one of the founding families, let it be known late in 2016 that the Mission Street property, which was owned by his father and a partner, had been sold to a non-profit housing developer with plans for 154 units of affordable housing. Housing is already under construction at the old Arthur J. Sullivan & Co. site on upper Market Street.

New housing units were also completed recently on Ninth Avenue near Irving, where Hogan, Sullivan & Bianco used to operate. Matt Taylor said last year that he was exploring relocation options for Valente, Marini, Perata, including the possibility of an onsite operation at the Italian Cemetery in Colma, but sadly, those plans did not come to pass.

One of the last funerals held at the firm’s Mission Street location was in July 2017 for a long-time resident, nearly 96 years old and a graduate of nearby Balboa High School and then Cogswell College (when it was located at 26th & Folsom Streets) who had spent a lengthy career working for the federal government. Not surprisingly, that last service included a traditional wake for the deceased from 5 to 9 p.m. on one day, followed by her Funeral Mass at nearby Corpus Christi Church on Santa Rosa Avenue and Alemany Boulevard the next morning. This is way things that things were conducted for decades at Valente, Marini, Perata and elsewhere, but in recent times, mourning customs in San Francisco have changed significantly. 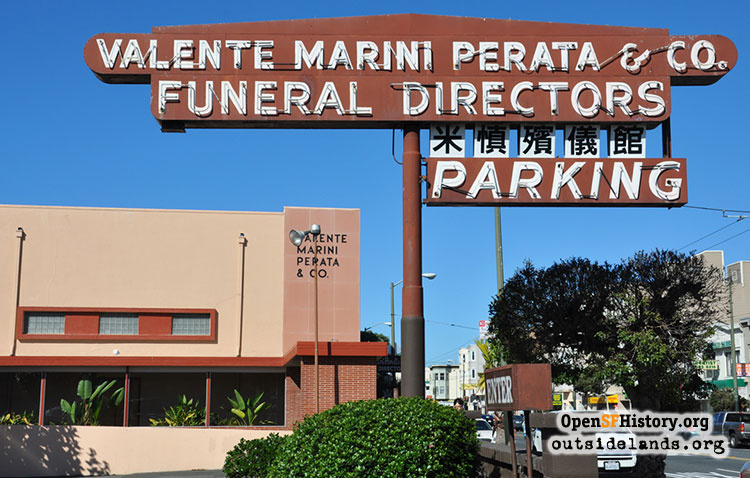 Several factors have impacted the local funeral industry, including:

Among Catholics, cremation was once forbidden, but it has been accepted by Church law since 1963, and its use has expanded significantly during this millennium—even among firm adherents. Likewise, there has been a greater acceptance of cremation among many observant Jewish families. Sinai Memorial Chapel, the traditional Jewish funeral director in San Francisco, notes on their website that they are able to accommodate a family’s wishes for cremation and a memorial service, as an alternative to that faith’s traditional practice which specified in-ground burial in a plain wooden casket within 24 hours of death.

San Francisco was once dotted with funeral establishments, often marketing their services to specific ethnic groups or neighborhood districts. From the 1920s through the 1950s, there were more than 50 listings for such businesses in each annual edition of the City Directory. By 1960, the number had dropped to 42 and by 1973, the count was down to 37. Today, that number has dwindled to just 11. What’s left? Here they are:

One recent innovation in the wake of the 2016 closure of Sullivan’s long-time Market Street location (following a 2006 merger with Duggan’s Serra Mortuary in Daly City) has been the establishment of a small Richmond District office labeled “Sullivan’s—Duggan’s Serra) at 26th Avenue and Geary Boulevard, opposite Holy Virgin Russian Orthodox Cathedral. While there are no services conducted from this office location, paperwork may be finalized, thus sparing grieving San Francisco family members from making the 10-mile trip to San Mateo County.

Natives will also point out that many “undertakers” were conveniently located so as to be just steps away from a friendly neighborhood watering hole—many of which have also disappeared based on reduced attendance following the closure of a nearby funeral establishment. Sometimes mourners took it upon themselves to give the dearly departed a proper send-off right there on the premises of the funeral home. One of this author’s high school classmates reported that his grandfather’s 1961 wake was such a boisterous affair (friends of the deceased had a full bar operating out of the men’s room, with cases of whiskey, boxes of cocktail glasses, and hundred-pound sacks of ice—with some mourners actually dancing in the lobby), that his family was banned from that particular establishment in perpetuity!

Florists, too, have experienced drastic changes in their businesses because of shifting patterns of mourning. Newcomers have sometimes commented about the number of florist establishments around 16th and Mission Streets. Old-timers continue to remind them that many local funeral directors were once located on Mission or Valencia Streets; also, the #40 streetcar line to San Mateo county once ran directly through that intersection before heading down El Camino Real/Mission Road providing service to “cemetery row”—though that interurban line was eliminated in 1948-49. See vintage film footage of the old #40 and other long-gone streetcar lines here.

In the past, many friends and relatives might send a floral wreath, a standing spray, a live plant, or a basket of flowers to the funeral home in time for the traditional after-work visitation hours and/or the next-day’s pre-church services. As late as the 1970s, it was not at all unusual to see dozens of floral pieces on display at an average funeral, though today, such tributes are often limited to those from the immediate family.

Even printed newspaper obituaries—once referred to as “the Irish Sports Section” by many faithful daily readers—are considerably shorter in length and fewer in number in recent times, with the cost of even brief notice often exceeding several hundred dollars. Many of the announcements posted today contain the suggestion, “donations to your favorite charity preferred” while San Francisco newspapers have historically been reluctant to offend the floral industry and have generally avoided using the stark words, “No flowers”.

Little by little, even death is undergoing significant changes—as more and more of the daily rituals from our collective past slowly fade from the scene.

Farewell, Valente, Marini, Perata—you had a good run of nearly 130 years, providing comfort and assistance to tens of thousands of local families during difficult times.