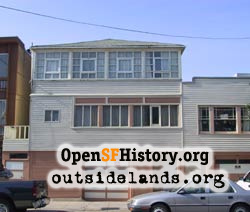 "The car farthest up the beach is occupied by a ladies' cycling club, of which a Mrs. Fitzgerald is President. Her husband is a clerk in one of the courts at the City Hall, and they have leased the car back of it for the summer and expect to pass several months there."
---San Francisco Bulletin, July 11, 1896. 1

Turned out that the Fitzgeralds spent another thirty years living in old horse cars at the beach.

Robert Fitzgerald and his wife Ida were pioneers of Carville. Ida was a founder of the Lady Falcons Bicycle Club, which rented one of the first of Adolph Sutro's repurposed streetcars as a beachside clubhouse. 2 So taken were the Fitzgeralds with their time spent at the ocean's edge that they went on to construct a permanent home just a few hundred yards away from the clubhouse.

In the late 1890s the Fitzgeralds built 1415 - 47th Avenue out of old horsecars that once carried patrons to the old Woodwards Gardens in the Mission district. 3 They worked to promote the more conventional growth of the Outer Sunset as members of the Oceanside Improvement Club, even offering the old Falcons' clubhouse to be burned in a public demonstration of the neighborhood's "progress". 4

By 1930, the childless couple were in their golden years, delinquent in their taxes and facing a bank foreclosure on their twice-mortgaged horse car home. Old friends and neighbors apparently helped them stave off the foreclosure. 5

After the Fitzgeralds passed away, a Mrs. Vicki Adams lived in the house. The San Francisco News in 1947 did a story on the house: 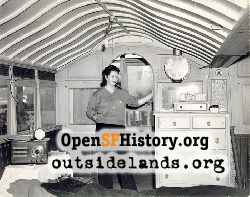 "From the outside of the Fitzgerald house it is almost impossible to spot the cable cars. The house is a three-story square structure with a garage on the street level and two dwelling levels above. A hallway runs around the cars, which are intact on three sides. One side of each was knocked out so they could be put together to make a single room with hardwood floor. The ceiling comes down in the middle where the two cars are joined, making it an uncomfortable spot for a tall person.

"These are the old dolly-pulled cars used in the early days of San Francisco cables.

"'They are just like they were when they were on the streets,' Mrs. Adams says.

"These kerosene lamps are still at either end of each car, even though the room is electrified. Also retained are the gold-painted, carved paneling and some of the old Pullman-type plush seats." 6

Frank Lemus has lived in the house for decades now, and reports that some remodeling job (done before his time in the house) eradicated all evidence of the old horse cars. 7