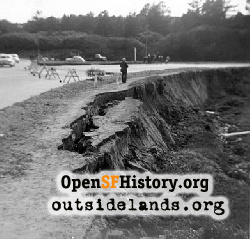 A little quake at 10:26 a.m., another one 21 minutes later, a third a minute after that, a little shock at 10:52, one at 11:04, another at 11:19, then quiet. Then just 26 minutes later, the Big One: 'A distant, awesome rumble that tightened throats with fear,' The Chronicle said. The sound was followed in an instant by 'a twisting, jarring, side-rolling motion.'

In an instant, merchandise littered the floor at the Emporium department store at the Stonestown shopping center and displays at grocery and liquor stores crashed to the floor. Nearly all the windows shattered at the brand-new library at San Francisco State College, out by Lake Merced."
—Carl Nolte, San Francisco Gate, March 19, 2007

Carl Nolte did not report that the student body of St. Cecilia's Grammar School had gathered in the Lower Church for Lenten Stations of the Cross on that memorable and scary day. Years later, in 2006, the Class of 1960 shared memories with each other:

Tom O'T: The first shake happened just after morning recess as we were going back to our classroom. The second and major shake happened just after Stations of the Cross as Father Riordan was going through the Benediction portion. After that tremendous jolt it was evident many of us were scared and unsure what to do. Father Riordan paused, turned around, addressed us all saying something to the effect, "We just had an earthquake; it's all over; there is nothing to be afraid of. We'll continue with Benediction." Father turned back and finished in record time. He went from a '45 to a '78 recording and was off that altar in a flash. Must thank the nuns who took control and kept us relatively calm and in order.

Bob O'D: Those wildly wobbling candlesticks on the altar during the earthquake—none fell, but Tom was right, Father Riordan finished Benediction at Warp Speed.

Jim H: I remember being in church and watching the light fixture above me swinging. I was next to the center aisle. Instead of diving under the pews as some did, I was going to run if the light fixture started to fall. Cracks in the halls of the school, and a pretty good aftershock while walking up the stairs to the second floor, making me use the hand rail. I don't remember any big statues falling. Rather, one had rotated 90 degrees—it was not facing forward anymore.

Rosalie S: Father Riordan had beads of perspiration on his forehead that day!

Kathy K: I remember getting under the pews when the giant pillars started swaying back and forth. Also recall the tremors that followed the big one for the rest of the day. What a mess our garage was when I got home!

John L: My recollection of that day is as vivid as the day it shook. We were in the Lower Church after Stations of the Cross and it started shaking. Father Riordan turned to us, lifted his hands and told us to be calm, and right at that moment it stopped. We all filed out and lined up in the schoolyard. After a while, they let us go back to our classrooms where we found all the desks in disarray, and papers all over the floor. What I thought was outrageous was that the big statues of Mary, on pedestals in every room above the teacher's desk, fell and shattered.

John M: I remember being in the lower church and all of us ducking under the pews. Then Father Riordan tried to calm us. I think I went back under the pew. I believe we had some projects in the classroom that were thrown to the floor due to the earthquake.

Rita M: My memory is very much the same, with Father Riordan finishing the Stations of the Cross at record speed and beads of sweat running down his face. However, I remember wondering why a man of the cloth was so worried and scared. Yes, we were all pretty scared but he wasn't supposed to be! He was gone immediately and we were left to the nuns. I remember a crack in the wall of the school, the statues broken, and going home scared, to find things in disarray.

Jo Anne Q: Ah! The earthquake! We were all herded into the yard. Parents were called to come take us home. One kid got hysterical—knelt down, put an ear to the ground, and started screaming that he could hear "the earth cracking and popping." That started a lot of other kids screaming, and the nuns had to quell the impending riot. When I got home there were more tremors and a tall, heavy bookcase nearly came down on my mother! I must have been ahead of my time, because I indulged in "play therapy." Got out my dollhouse, set it up with furniture, and its little people, and then shook the hell out of it!

Jerry F: I think it was Steve D. who put his ear to the ground to listen for another earthquake. I remember thinking it was really a goofy thing to do, and it somehow scared the hell out of me; but in retrospect it was probably about the most scientific thing a fifth-grader could do to predict another quake. (Not much removed from what's happening now, no? Probes in the ground.)

Edna L: I was still at Parkside School awaiting a spot in St. Cecilia's. I remember sitting on a chair at my desk in the middle section of the classroom. And after it stopped shaking, I was still on the chair, but now over against the wall. They sent everyone home, didn't bother to call parents. There were kids whose parents worked, and they had to go home alone. I lived across the street from Parkside, so I brought some kids home with me until they could get a hold of their parents. I remember all of the stonework on every house on the block was broken away, and laying on the ground.

Maureen M: Walking home after that earthquake and seeing the 16th Avenue Market with windows all broken.

Diane F: They let us go home early and I was so nervous that I ate meat on Friday! My mom said it was okay—God wouldn't punish us again!

And the best recollection of all:

Pam B: I remember my mother picking me up at school after the quake, taking me to the Emporium in Stonestown and buying me Elvis' record, "All Shook Up."