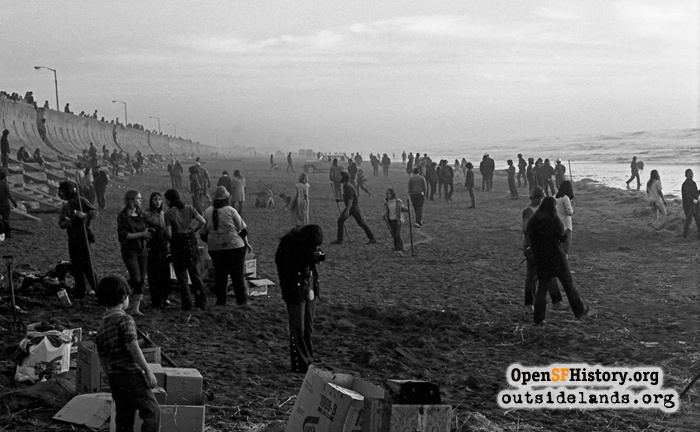 The story of the 1971 oil tanker spill, the mobilization of volunteers to clean beaches and birds, and the legacy of the event.

Bird Rescue in the 1971 Tanker Spill

Foggy night, both ships going a bit too fast. Neither crew was sure where the center of the channel was, so neither ship followed correct practice of staying to the starboard side. Neither ship used its radar right. Bang. Locked together, they drifted into the Bay, the Oregon Standard gushing oil. 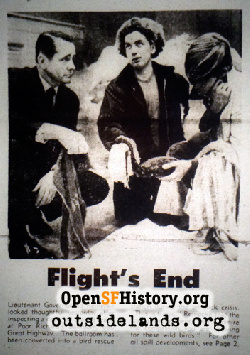 Cleanup efforts in some places involved putting up booms. Oil-skimming boats were deployed. When oil hit beaches like Ocean Beach, people spread straw to soak it up, and then trucked the straw away.

There were oily birds on those beaches. When a water bird is oiled, even in just a spot, it makes a breach in the waterproof plumage. Water seeps in and soaks to the skin. The bird gets chilled, as you would be if I poured a few pitchers of ice water down the collar of your down jacket. The feathers get waterlogged, the bird gets heavy, and starts sinking. Desperate birds - species that may never set foot on land in their whole lives - head for shore to keep from drowning.

No government agencies and no private organizations seemed to feel it was their task to do anything about the stranding oiled seabirds. No one knew what to do. People wanted to help. They called state, county, and city agencies and humane societies. In many cases the advice they got was not to touch wild birds - dangerous, dirty, diseased.

Later it was claimed that state Fish and Game had had a plan - mostly "remove birds... from public view and... destroy those birds which... had no chance of survival." They would wash the rest with Polycomplex A-11, a dispersant which had been used in the 1969 Santa Barbara oil spill. When they could get some. Public action beat them to the punch.

That was a golden era in local FM, before today's "Contemptible Monolith Radio." KSAN DJs began taking calls from outraged, grief-stricken people. People spontaneously organized rescue operations. They set up around 30 bird cleaning centers. KSAN became a communications center. "More birds are washing up on Ocean Beach..." "Ron in Pacifica says they have about 30 birds, they need towels, boxes...." "Does anyone have plywood and carpentry skills to make pens?"

One of the bird stations on the west side was Poor Richard's, variously referred to as Poor Richard's Sick Bird Place, Poor Richard's Ballroom, the People's Bird Hospital, and the Family Dog, the large 1884 landmark building at Great Highway and Balboa Street. 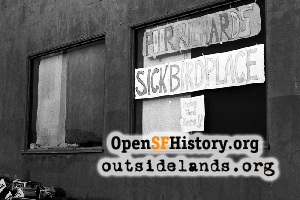 One of two bird rescue centers set up on Ocean Beach, Poor Richard's was a grass roots effort by locals, 1971 - Dennis O'Rorke photo

Another was at the San Francisco Zoo.

I lived on the Peninsula. My mother kept KSAN on all day. Too young to drive, I persuaded my mother to drive me to San Francisco to help. At the Zoo gate on Sloat Boulevard, they sent me to the Lion House. I had been to the zoo, to the Lion House, but hadn't known there was an enormous basement below. There were tubs of water on tables, boxes of birds on the floor, and harried people. One volunteer compared scenes at a bird cleaning center to a Crimean War field hospital. (Minus guns, plus lions.)

It stank of lions and birds. The lions knew something unorthodox was happening below. They roared.

Someone asked if I knew how to handle birds, and I said yes. True. I had reared a duck. They gave two of us a scoter, and told us to rub it with cornmeal, to soak up the oil. The idea was to rub it in the direction of the feathers, not against.

Hours went by, bird after bird, and I was holding a loon, a bird I had heard of but never seen. I had read of them uttering unearthly cries on northern lakes. The bird I held looked around wildly and uttered soft calls, almost whimpers. It sounded anguished. What does a loon think when it finds itself half covered with clinging black oil, being mauled by apes in a cavern echoing with roars? I'm sure "I have to get out of here!" is a big part of it.

My mother took me to the Zoo several times to wash birds (What did she find to do in San Francisco in 1971? Oh, something.) and then the Zoo transferred its oiled birds to a bigger center in a Richmond paper warehouse that belonged to U.C. Berkeley. All surviving birds from the 30 centers were taken there. Later, the dwindling number of survivors were moved to a temporary facility on Tubbs Island, on Nature Conservancy.

In the end, I heard, 200-300 birds were released from that spill, out of around 8,000 captured. Most were the sturdy surly sea ducks - scoters and scaups. Only a few grebes. No loons made it.

Recently I looked at 1971 newspapers, to check my memories. So huge! Page after page after society page. Herb Caen was going strong. The environmental movement was fairly new. People were obsessed with hippies. Hippies bad dirty lazy, or hippies cosmic loving tuned-in. The opposites of hippies were said to be "hardhats." And a theme threaded through the coverage in the Chronicle and the Examiner was that hardhats and hippies were working together to save the birds - incredible! 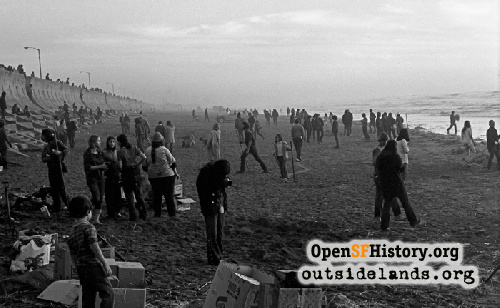 Volunteers came out to Ocean Beach to help with the clean up efforts and bird rescue., 1971 - Dennis O'Rorke photo

The "countless volunteers" were not exclusively hippies and hardhats (these hardhats being mostly Standard Oil employees).1 Some schools in Marin and Pacifica closed so kids - and teachers - could go to the beaches to gather birds or clean up oil. Others were "unquestionably cutting classes." There were "middle-aged women," "Navy men," "office girls," young suburban couples, welfare recipients, fraternity men, and "long haired types from nearby communes."

People were inspired by the way everyone came together. A bartender who dropped everything to wash birds near the St. Francis Yacht Club praised the Army for using a helicopter to drop hay bales on oil slicks. "I was speeding in here with an oily bird, and an MP escorted me all the way," he said. "It's really beautiful the way people react." Police cars radioed locations where birds were stranded. A woman who called herself "a hardhat's wife" said, "After working with those longhairs, up to their necks in water and goo for 20 hours, we've gained nothing but respect for them." Caen praised "Little Old Ladies cooking soup for the hippies" at Poor Richard's. 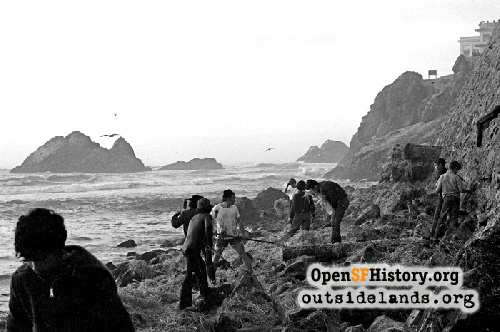 Absorbant hay spread on the rocks below the Cliff House by volunteers of all ages., 1971 - Dennis O'Rorke photo

Two days after the spill, a society page reporter lauded five prominent women for making sandwiches for clean-up workers, but demanded to know where the rest of the ecology-minded "top-drawer socialites" were. By the next day, he'd found them at the Zoo: "Society's slick chicks are the overnight saviours of our oily birds--along with everyone else." He called it "our finest hour."

On the Tuesday after the spill, 250 "kids" and hardhats were spreading hay at Bakers Beach. Seventy-five actual kids from Bolinas school were picking up birds. Surfers and skin divers in wetsuits swam out to collect oiled birds still floating. 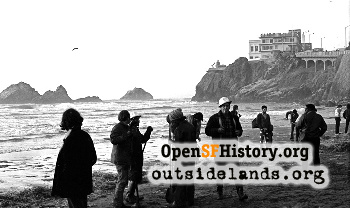 One hippie-struck reporter described listeners as being "plugged into the great electronic network, the local FM rock stations, these towncriers for the new young gypsies... which flashed the plight of the tarred birds and oiled beaches while the older society was still drawing up plans." The papers ran daily information on where to go, what to bring. KSAN printed leaflets on how to clean birds.

"Interested persons should bring mineral oil or baby oil, sawdust or corn meal, rags, heating lamps and washtubs," Friends of the Earth said. Newspapers told how to handle an oiled bird - put a sock over its head, keep it warm, soak it in light mineral oil or cooking oil "to keep the heavy mineral oil from solidifying." Watch out: "Birds may be hysterical."

The directions for cleaning sound disturbingly like directions for cooking. "[G]ently scrub the feathers and body with light oil and cover the bird with corn meal... If possible, scrub the bird in a tub of oil. Rinse... in warm water, rub dry, and repeat the oil-cornmeal-rinse routine until the goo is gone." I cringe at the memory of doing that.

Two days after the spill, Standard Oil called the state Department of Human Resources to hire 200 people to help with clean-up. But there were so many volunteers that the people who came to work were told they weren't needed - and had to pay their own way home.

Oakland Assemblywoman March Fong (later, as March Fong Eu, California Secretary of State for 32 years) was so insistent that Standard Oil pay for every bit of damage that she wrested from them the strange promise to "buy and import" replacement birds. Presumably she thought you could buy loons and grebes the way you can buy farm-reared ducks and quail. 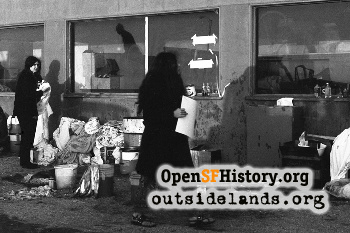 Ignorance is widespread in the newspaper stories. At Poor Richard's they told Caen their mascot was Fat Albert, a 40-pound "Canadian spotted loon" rescued at Ocean Beach. They said Fat Albert put up a "wing-flapping squawk" when they tried to move him to the Zoo, so they let him stay.

Canadian spotted loon? No such bird. Of the three species of loons he might have been, Arctic Loon is the most likely, and the biggest, and if he weighed 18 pounds he'd have been a very large specimen. (A few days later Fat Albert did go to the Zoo, where he died.)

A news story described a grebe at Pillar Point Harbor "so soaked with oil that it could hardly walk," and quoted a heartbroken observer: "It would take about two steps and then flop in the sand." But even a clean spotless healthy grebe can hardly walk. Their shape, which has evolved beautifully for diving and swimming under water, is nearly useless for walking. Two steps is pretty good.

A group of dedicated people who wanted to figure out better ways to clean oiled birds and to keep them alive until they could be freed formed an organization called the International Bird Rescue and Research Center (IBRRC). IBRRC is now called IBR or just Bird Rescue and is based in Fairfield and in San Pedro.

In 1976 there was a huge oil spill in the Delaware River when the tanker Olympic Games gashed her hull on a dock, and Tri-State Bird Rescue & Research, the east coast version of IBRRC was formed.

Many people think washing oiled birds is a pointless, conscience-salving gesture. African Penguins (Spheniscus demersus) are a counterexample. IBRRC helped respond to two major South African tanker spills (1994 and 2000) that fouled the penguins' nesting grounds. These birds are now endangered for various reasons, but they'd be in worse shape if not for bird-washing do-gooders. A 2009 analysis concluded that the population was 19% higher than it would have been without spill response efforts.

Some recent books on San Francisco's recent history make no mention of the 1971 spill. They miss the story of a significant international organization and a movement which had part of its beginnings in the western neighborhoods.

1A California Department of Fish & Game staffer estimated the "countless" volunteers at 40,000. But we were hard to count because we didn't stand still.