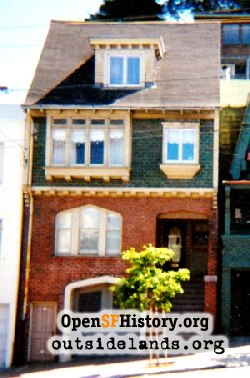 The picture you see is of the house my great-grandparents bought and raised my grandmother in, as well as the house in which my father was raised. I've never been inside the house, but through the writings of my Dad, I can just picture what the house looked like. Below are two short stories, written by my Dad, about his grandparents, Jim and Annie Connell. ---Julie Lane, Paso Robles, California, 2008

The Ballad of Annie and the Pink Cocktail

My maternal grandmother, Annie Lynch Connell, might have been a tiny baby because she never scaled more than the 77 pounds she carried at her age 77 when she died. But she was the master, pardon, mistress of all she surveyed. Her word was law to the family of seven who sat around her dinner table. Annie loved to debate politics. She would inject her ankle-length-skirted self into her arguments with great vigor, often with a stemmed cocktail glass in hand---pointed at the enemy of the moment. That stemmed glass was often at a 30 degree angle or more but Annie was famous for not spilling a drop of the pink mixture it contained. The cocktail was a five o'clock ritual at Annie's house. Her pink creation may not have been the fore-runner of the Pink Lady, but it was very popular with visitors.

One day in Golden Gate Park Annie evidently won one of her debates that most of us would have lost. It was with a police officer who found Annie picking flowers there. Evidence of her victory was in the fact she brought the flowers home. He was an Irish cop.

A soft side of her was disclosed by her inviting a man from the Assessor's Office into her home when he rang her doorbell. He had said he was from Ireland. Later Annie and her spouse got a whopping personal property tax bill from the City. The Irish tax man had mentally inventoried most items in her house.

Annie came from a family of sixteen in County Caven, which at the time of her birth in 1848 was part of Northern Ireland. So, Annie's family were persecuted Catholics, or believed they were. She would tell you they were, again and again, with stark denunciation of the perpetrators she had been too young to know. She was the last of fourteen girls. When she was five years old she and four sisters were sent to the United States. It may have been all her parents could afford at $10 per passage. Note the year! 1853 was one of many that suffered from the potato famine in Ireland. There is little information from my forebearers on the nine daughters who stayed in Ireland. They never came to America like their five sisters---forty years before the establishment of Ellis Island.

I guess it was the beginning of a happy ending for the emigrant Lynch girls. They grew up with relatives in Dixon, Illinois. They all married and settled in Council Bluffs, Iowa; Colorado Springs, Colorado; Portland, Oregon; and San Francisco, respectively. Annie didn't marry until she was thirty-five when her cousin brought co-worker Jim Connell home for Christmas from Denver. Jim and Annie married in Denver and honeymooned in San Francisco, where Annie fell in love with her "blessed fog" and refused to leave. The couple had four daughters, none of whom was very much like Annie. My mother was the youngest and her mother's favorite whom she called "Tots" and who inherited the recipe for the pink cocktail, the habit of the cocktail hour and a bit of Annie's antipathy for people who were not of her race or religion.

As for the pink cocktail, I can remember, young as I was, Annie's frequent fiat. "Let's have a little taste, Tots."

And long after Annie was gone I remember her youngest daughter proclaiming, "It's gotta be five o'clock somewhere" as she produced the bottle with the pink elixir.

Grandpa Jim was a big man, often mistaken for a cop. Opposites attract, and maybe that's why he and his wife, tiny Annie, got together in 1883. They differed not only in size. Where Annie was animated, Jim was quiet and reserved. They had one thing in common. They both had a brush with the law, and Jim's appears below.

After Annie died, Jim had a daily routine until he passed away five years later. At that time he was eighty-three years old and I was twelve. When he got up in the morning my mother would serve him breakfast, then give him a quarter which he would use to go downtown. Round trip on the street car took ten cents, and fifteen cents was for the silent movies. Jim was quite hard of hearing. The movie houses often had three films, and he would stay all day, seeing them second time around.

One day Jim left the movie house in the late afternoon. It was getting dark, and he sat leaning against a fire hydrant on Market Street waiting for the streetcar. He fell asleep. When a Police Patrol Wagon came by, the officers saw him and presumed him to be a drunk. They put him in the paddy wagon and proceeded up Market Street on the way to Park Station. On that route they turned off to go up Haight Street hill. By that time Jim had convinced them that he was merely a sleeping giant, not a sleeping drunk. The paddy wagon was abreast of a Number 6 street car, which was Jim's normal car home and which he had evidently missed while asleep. With the cops' permission, Jim stepped on the patrol wagon step, grabbed the bar on the car-track side, and swung onto the streetcar platform.

The startled conductor slapped Jim on the back. "Gee! Ya did that slick! Dumb cops! Ya better get inside and duck."

I was proud to be part of Jim Connell's daily routine for a long time. When he arrived home each day he would remove his coat, hang it in the hall closet and then sit in his big armchair in the dining room where he would read the daily paper. I would bring his slippers, remove his high, laced shoes, and replace them with his slippers. His Granger Rough Cut smoking tobacco was on a side-board, and I would go to it, fill his pipe and bring it to him with matches. There was no conversation. I left him in peace with pipe and paper until he needed a tobacco refill. All this was a great privilege to me, because I adored the man.

I can remember Grandpa speaking only four words, which he uttered every night at the dinner table. "Pass the Worcestershire Sauce." I watched him pour it over each food item on his plate every evening.