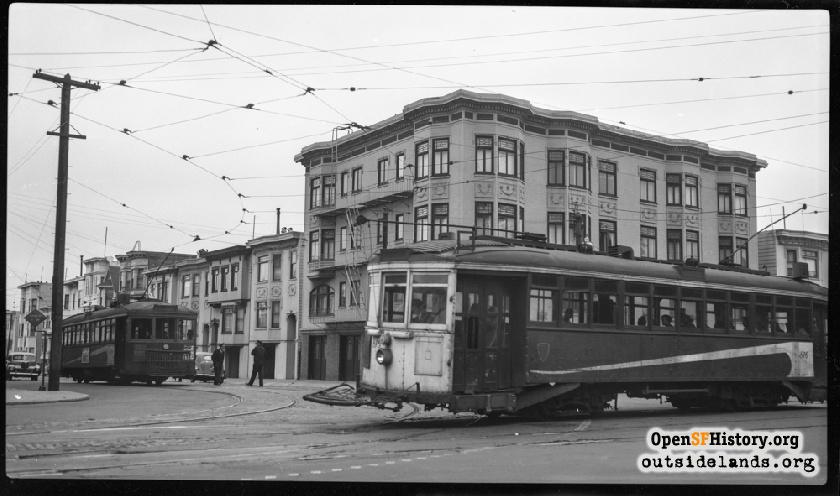 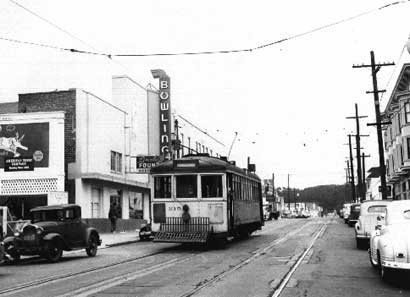 Car 215 at Sixth Avenue, south of Clement street in 1948. ("Lincoln Bowl" had served the Richmond district as the Lincoln movie theater until 1939.)

Service begun: Service began as a new line designated No. 4 on June 16, 1935. The original No. 4 Turk and Eddy was discontinued (except for Owl service) in 1932 with the opening of the Market Street Railway's No. 31 line.

Walter Rice from Friends of the Cable Car Museum points out that the No. 4 Sutter & Sacramento was the only Market Street Railway line (and from September 1944 the only Muni line) that ran on Market Street but never ran to the Ferries. (The one exception being the No. 23 across the short strip of Market between Valencia and Gough.) Thanks Walter! 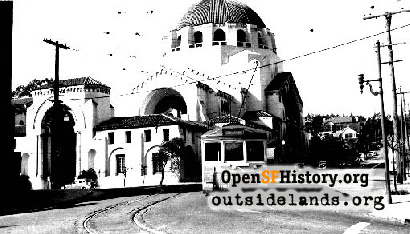 More from Walter Rice on the #4 line: "[The route was] later discontinued with the part west of Fillmore incorporated into an extended No. 55 bus that in turn became part of the restructured No. 1 trolley bus line in the 1980s. Service on Sacramento west of Steiner shifted to California. The No. 4 number was used from the early 1950s for a rush-hour-only trolley coach service from Sutter & Sansome to Presidio Avenue. This became a 12-hour-a-day line in the 1980s with the combining of the Nos. 1 & 55 lines. The new No. 4 runs from 6th & California to Sutter & Sansome."

Images: Courtesy of the collection of Jack Tillmany