And now a word from the brick industry... 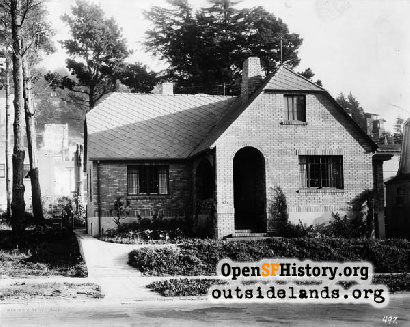 O.C. Hansen, manager of the local office of Frazar & Company, the importing and exporting house, had an interesting series of experiences in building his just completed home, which leads him to say, "If you want to stay out of the real estate business, don't build a home of Face Brick."

Hansen secured the plans for his face brick home from the American Face Brick Association. It is an extremely unusual and beautiful example of the English cottage, and is true to type in every particular. Hansen states that scarcely had the masons started to veneer the walls with Dickey Face Brick when he began to be deluged with requests to sell the house.

"Many of the buyers became very insistent," says Hansen, "and I could have turned the home at a very satisfactory profit, but I built it for my own needs; it met my desires ideally, and I resisted all offers, although some of them were extremely tempting."

The brick veneering was the work of Martin Muller, who skillfully blended the varying tones of the Dickey golden-brown face brick, with a result that is unusually beautiful and distinctive.

Hansen states that he was pleasantly surprised by the moderate cost of the face brick veneer, which added only about 7 per cent more to the cost of the home than it would have cost had an ordinary finish been employed.