70 years ago the Parkside celebrated public transporation to the zoo. 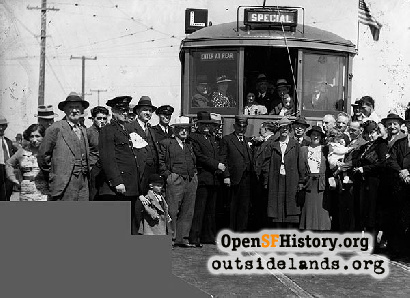 On September 15, 1937, after five years of lobbying by neighborhood residents, the L-Taraval line was extended to turn on 46th Avenue and reach all the way to the Fleishhacker Playground, today's San Francisco Zoo.

Mayor Angelo Rossi, continuing the tradition begun by predecessor "Sunny Jim" Rolph, acted as motorman for the first streetcar on the new tracks. Neighborhood leaders from the Parkside District, such as Ray Schiller, Ed Haughy, and Mabel Powell joined him onboard to celebrate.

Actually, the rails weren't exactly new, but recycled from obsolete tracks on Gough Street and 10th Avenue in the Richmond District. The WPA provided the labor, so the 9/10 of a mile extension that made the Zoo and enormous Fleishhacker Pool more accessible, cost San Francisco taxpayers nothing.

Property owners in the outer Sunset District were happy too. As you can see from the sparse development in the photo below, improved public transportation options could do nothing but help get home builders and buyers interested. 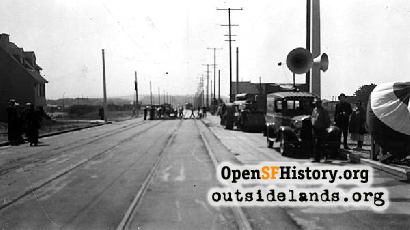