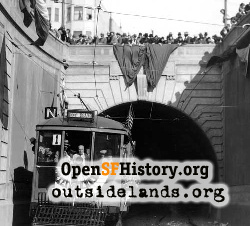 In recent years the route has been extended on the east side to serving the south embarcadero all the way to the CalTrain station at 4th Street and Townsend. When the T-line opened in 2007, the N-Judah cars resumed stopping at Embarcadero.

Thomas Mulcahy remembers the first day on the N-Judah:

"Based on the date I was seven years old. My father was always active in Sunset [District] activities. We were able to ride on the first car from 7th and Irving to 10th and Judah (close guess). The mayor Jimmy Rolph was the motorman. He was in a white suit with white boots and a white hat and put on a show for everyone. Years later, when I was going to Cal and had to commute to Berkeley it was my early morning ride down to the 2nd and Mission depot to catch the bridge train." - October 5, 2007.