Administration Building at the 1894 Midwinter Fair

Administration Building at the 1894 Midwinter Fair

Creating and managing the 1894 California Midwinter International Exposition not only meant raising capital during a national depression, securing support from government, business, and newspaper syndicates, but also managing armies of workers and finding offices and desks for innumerable department heads, supervisory committees, clerks, typists, and bookkeepers. In addition to the four main exposition buildings to showcase agriculture, mechanical arts, manufactured goods, and fine arts, a fifth was dedicated just to running the fair in Golden Gate Park.

While the Administration Building was the least expensive of the five main fair buildings surrounding what is today the park’s Music Concourse—contractor P. Antonelli constructed it at a cost of $30,654—it didn’t lack in design or visual impact from its location at the head of the fair’s grand court.1 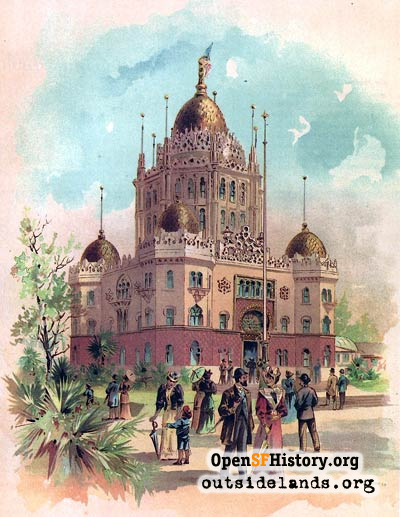 Described in the fair’s official history as Byzantine-Gothic style with “Mooresque” ornamentation, and by the Los Angeles Herald as “oriental in outline, representing a combination of central Indian and Siamese architecture,” the Administration Building stood out. Black and white photographs capture its intricate design elements but deprive us of its startling dessert-cake color palette of pink, gold, cream, and white.2

Architect A. Page Brown, who also designed the Manufacturers and Liberal Arts Building directly opposite, drew up a square floor plan for the Administration Building with a gilt dome rising 135 feet high and 50 feet in diameter in the center. The main tower and hexagonal towers at each corner, each topped with their own gilt domes, had battlements lined with delicate scrollwork and the façade was pierced with keyhole, quatrefoil, and lancet window openings. The recessed and vaulted entryway and first floor exterior wall was decorated with geometric designs. Inside, a three-story rotunda lined with loggias rose to the center dome and, perched above, a plaster female figure meant to represent a “Goddess of Awards” triumphantly held a long banner.3 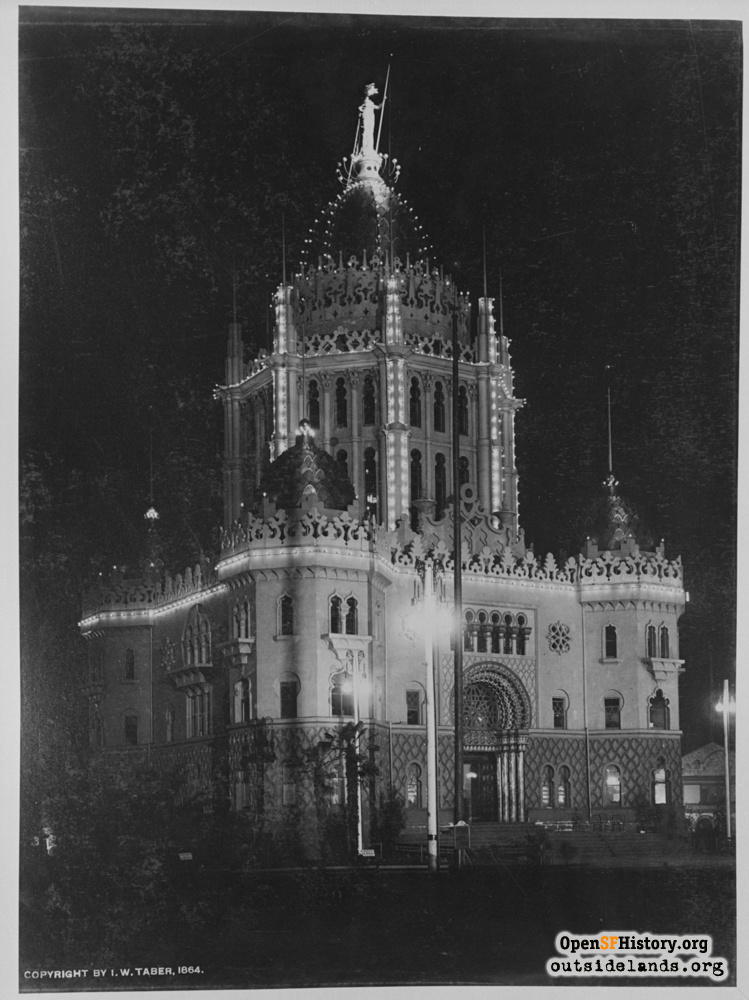 To understand the need for a building dedicated to fair administration, one has only to consider the number of people involved in launching and operating the exposition. After beginning as the brainchild and passion of one man, Michael de Young, the exposition’s planning and execution expanded to a Citizens’ Committee of Fifty, consisting mostly of leading city businessmen.4 Out of that fifty, a sub-committee of eleven selected an Executive Committee of five San Franciscans who were charged to choose an additional four members from other regions of California. De Young served as President and Director-General with Irwin C. Stamp as Vice-President, banker P. N. Lilienthal as Treasurer, and Alexander Bedlam as Secretary.5

As the idea gained momentum, San Francisco mayor Levi Richard Ellert appointed a Finance Committee of “fifty leading citizens,” to raise money for the fair, which led to a Department of Finance and an additional Volunteer Auxiliary Finance Committee. A Department of Publicity and Promotion was created to send out news releases, promote the fair in multiple languages, and subsequently archive every mention of the exposition found in periodicals across the world. All of these men and departments and committee meetings needed working space once the fair was underway, and further elbow room had to be found for a traffic manager, a sanitary supervisor, a medical director, a director of “color,” a director of music, a director of amusements, a director of admissions, managers of security guards and landscapers, and all the many necessary cashiers, accountants, and secretaries.6 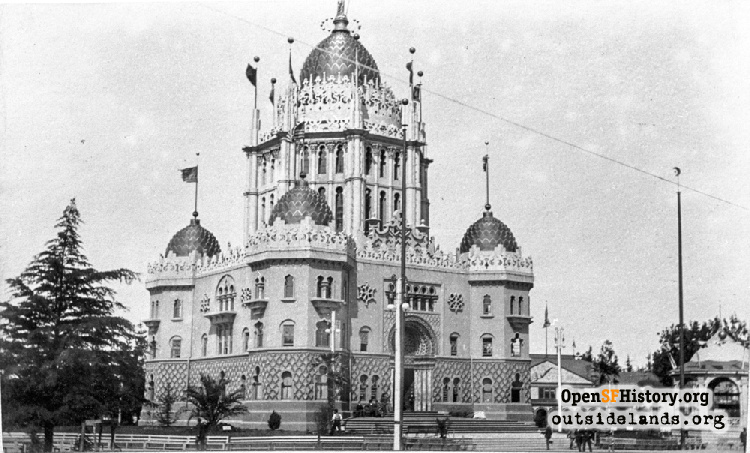 View west to Administration Building and bandstand at right in Golden Gate Park., 1894 -

The San Francisco Chronicle called the Administration Building “The Brain of the Fair,” and while the paper admitted there were no exhibits that might attract the public (beyond ground-floor restrooms), an opening day reporter tried to gin up some excitement for the business conducted inside: “…from morning until eve shot the staccato click of typewriting machines and telegraph instruments. Telephone bells kept ringing, and the sounds of business that reached the sightseers in the central circular space grew suddenly loud and then dim as office-doors were continually opened and closed.”7

The ground floor had rooms for reporters and publicists to write and disseminate the fair news of the day, a post office, and a station to collect lost children. The second floor held the executive offices, including de Young’s sumptuous private suite in one of the towers: “The decorators displayed much taste in harmonizing the chairs, desks, tables and other pieces with the soft carpets, the oil paintings, the magnificent electroliers and the addenda. A fire glowed in the splendid grate and over it on the mantel were a magnificent onyx and gold clock, candelabra of onyx and gold, and vases that held bunches of fragrant California flowers which had just been plucked.”8

On the third floor all of the fair’s bills and revenue passed through the Office of the Cashier and a counting room. The commandant of the security guards for the fair and most of the foreign delegations had offices nearby. There were rooms for banquets, committee meetings, and medal deliberations to honor exposition entrants for everything from best oil painting to tastiest peach.

While there were flagpoles on just about every fair building, two main posts in front of the Administration Building served as the official ones, while the front steps and broad plaza beyond was a popular gathering spot for group photos, reviewing the many parades over the course of the exposition, or enjoying concerts at the bandstand just to the north.9 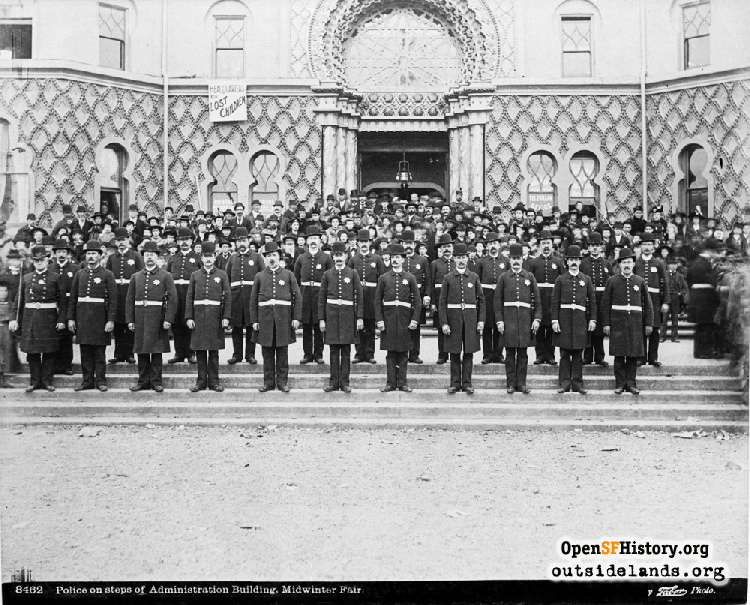 Once it became apparent that the exposition would have a surplus, the fair’s Executive Committee met to decide what “gifts” to leave to Golden Gate Park to serve the public and stand as a memorial to the success of the fair. In addition to keeping the improvements that created today’s the Music Concourse, the committee proposed preserving the Fine Arts Building as a park museum, the Manufactures and Liberal Arts Building as an exposition hall, and the Administration Building as a park headquarters with public-serving comfort stations (restrooms) on the ground floor.

The Park Commission, never fully onboard with the exposition and its impact on the park, accepted the Music Concourse and Fine Arts Building, but respectfully declined the Manufacturers and the Administration buildings. The wedding cake temple for typists stood for months after the fair’s close in July 1894, but was eventually demolished and contributed $326.16 in salvage money to the fair’s surplus.10

1. The Administration Building stood about where the Spreckels Temple of Music bandstand (erected in 1900) is in Golden Gate Park.

5. The rest of the Executive Committee had interests in real estate, mining, agricultural and financial industries in the state.

9. Among the bands that played there was John Philips Souza's orchestra, which performed in March 1894. (San Francisco Call, March 20, 1894.)

10. In the end, the Park Commission also accepted the Royal Bavarian Pavilion building, which stood beside the Fine Arts building, the Japanese Tea Garden, statues "Poem of the Vine" and "The Cider Press," and 1,100 benches, with some still in the Music Concourse today.