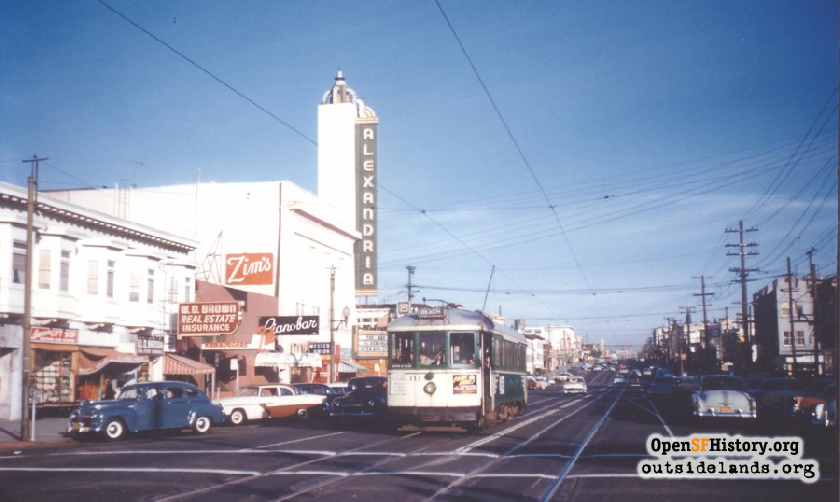 This 1923 Richmond District landmark by the Reid Brothers closed in 2004. 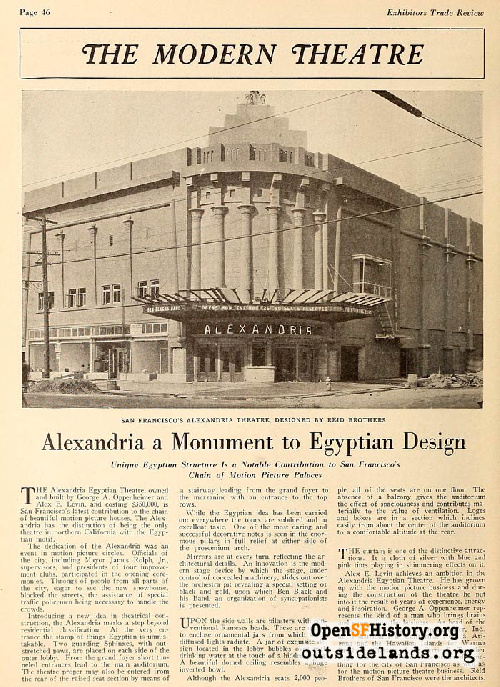 Article in Exhibitors Trade Review magazine about the opening of the Alexandria Theatre., Mar 22, 1924 -

Closed since 2004, the Alexandria Theatre building has suffered through multiple owners and different development plans. As of 2018, a complex of condominiums was close to completion on the old 18th Avenue parking lot, but no decision on use for the main building has been approved. (Latest idea is a swimming complex.) 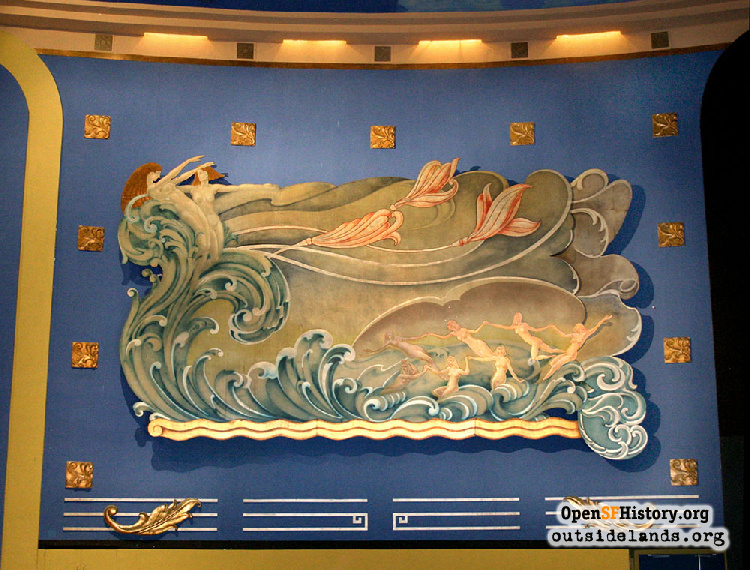 "Since Alexandria seems to be the buzz word of the week:

"Actor Richard Egan (A Summer Place, etc.) reportedly worked there as an usher back in the 1940's.

"The opening of South Pacific (1 July 1958) marked the Alexandria's debut as a first run, reserved seat, roadshow operation. Each seat was numbered, and you bought your ticket in advance, just as you do today for live shows at the Curran, Golden Gate & Orpheum. This was a popular way to present prestige films in the late 1950's and the 1960's.

"Under this new policy, the Alexandria had some really long run attractions:

"However, this new policy was, in retrospect, a mixed blessing. While bringing huge crowds to the Alexandria from all over the city, it effectively ended its life as a neighborhood theatre.

"Up until the summer of 1958, Richmond District residents could depend on Alexandria for quality film entertainment that changed weekly, without fail, but now, with a single film running for nearly a year, it no longer fulfilled that purpose. Former Alexandria patrons drifted off to the Four Star, the Balboa, and the Coliseum, but none of them offered as large and wide a screen for CinemaScope attractions nor the magnetic four-track stereophonic sound that had become Alexandria staples."

"Meantime parking became a real problem. Neighborhood patrons usually lived within walking distance of the theatre, but this all changed, and with hundreds of additional automobiles suddenly descending on Geary Blvd. in search of parking spots, particularly on weekends, the situation became chaotic, and the Alexandria's own miniscule parking lot on 18th Avenue was of little or no help whatever."

"At the time they called it progress. But was it? Either way, it's all part of Alexandria history." 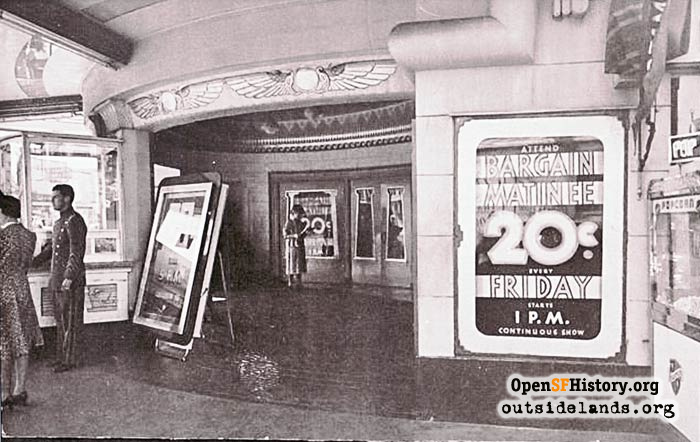 Alexandria Theatre entryway with usher and Egyptian motifs above foyer. Note popcorn stand on right. Interior concession stands would not start until after World War II., 1940 -

Plus a bit from Bob Zingmark: "Michael Stern, a Superior Court Judge in Los Angeles, sold evening newspapers in front of the Alexandria during the 1950s."

Thanks to Kerrick Sasaki, who paints us a picture of the Alexandria's last show:

"I went to the last showing for the Alexandria Theatre yesterday afternoon (February 16, 2004). I saw the 4:00 pm showing of, "Miracle" downstairs in the main auditorium. One local news station (KRON 4) was interviewing the last patrons of the theatre as they entered and exited. Many people didn't even know that the theatre was closing!

"I took one last look around the theatre with it's split stadium risers(theaters 2 and 3) and it's pretty deco lobby then entered the main auditorium. There were maybe 100 people who filled the 600+ seats for that last show. Sadly, for its last day the main auditorium looked the best that it has in years. In my previous visits to the theatre the lighting was so low and dark. But for it's last day they turned on lights on the sidewalls to illuminate the deco murals that flanked the screen. I used to frequent the Alexandria regularly over the last year as I used to live a couple of blocks away from it. It was sad to see this already underserved neighborhood lose another theatre. Sitting on the corner of 18th Ave and Geary, the Alexandria has a fantastic street presence. Something not unlike the Grand Lake Theatre in Oakland. The movie, "Miracle" was good, but not something I would normally run out to see, but this was my final chance to pay respects to a wonderful theatre.

"When I left the auditorium I noticed the snack bar was stripped bare and the only consolation for the last patrons leaving the theatre was letters from the marquee and the posters from the poster cases outside. So after taking almost enough letters to spell my name, I left the Alexandria. I crossed the street, took a look at the blank marquee and sighed."

By February 28, 2004, Regal Entertainment had already pulled out all the projection equipment, speakers, and seats. (Kids in the neighborhood ran down the streets holding these in the air as souvenirs.)

"A deal has been consummated whereby Alex E. Levin, well known in motion picture theatrical circles, and Joseph L. Levin, attorney, have purchased from Jacob Weissbein the northwest corner of Geary street and Eighteenth avenue and plans have been drawn by Reid Brothers, architects, for the immediate erection of a magnificent $250,000 theater seating 2000.

"The new theater will, in the opinion of the builders, be one of the finest residential theaters in America, involving the very latest construction features, lighting, ornamentation and every known comfort.

"The Levins have expressed themselves as very enthusiastic with the prospects of the new location, which they claim will become the nucleus of a new business center, to the benefit of the Richmond district as a whole." 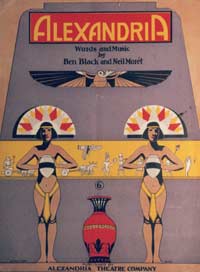 From Cities Within the City, by Anita Day Hubbard.
Published in the San Francisco Bulletin in 1924:

New Theater is of Egyptian Design

"Picturesque in design and containing all of the latest inventions for the comfort of motion picture enthusiasts, the new Alexandria Egyptian, Richmond district's most modern photoplay theater, is different from any other in Northern California. The theater brings to San Francisco a suggestion of the famous Egyptian Theater of Hollywood, which is reputed to be the height of originality in movie theater construction in America, which means the world." 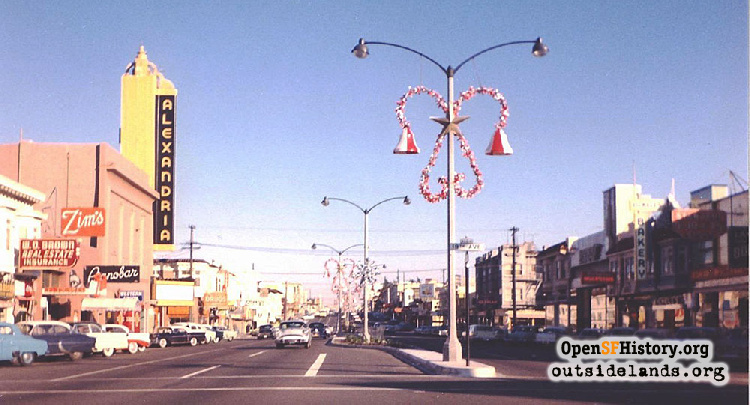 Looking east on Geary Boulevard from 19th Avenue. The Alexandria Theatre is between shows in this shot. Pianobar and Zim's at the former Koffee Kup., 1959 -

Contribute your own stories about the Alexandria!