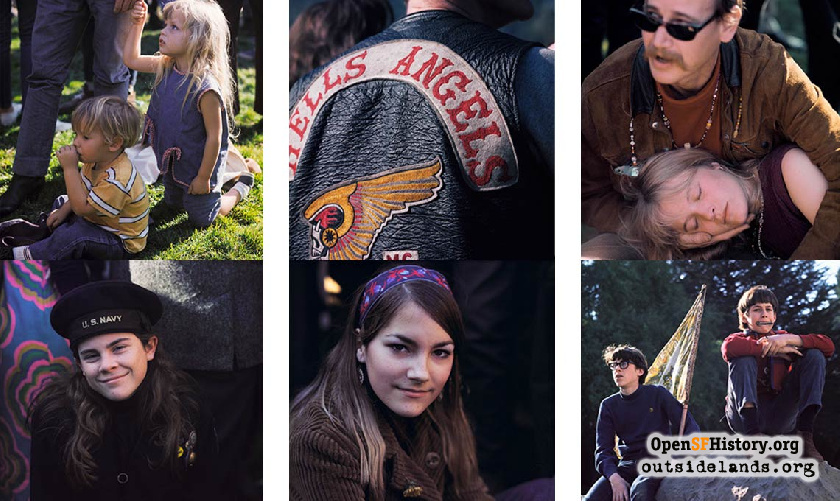 The Polo Fields and the Birth of the Rock Festival

In 1967, the Human Be-In kicked off a notable year for a new counter-culture, and a rock music tradition.

The Polo Fields and the Birth of the Rock Festival 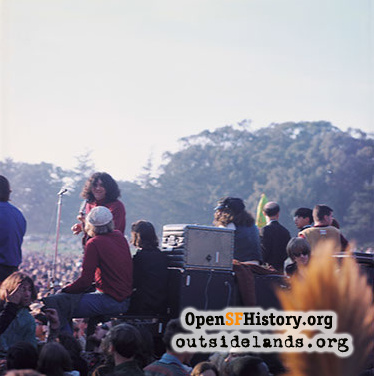 San Francisco has a long, rich, and diverse music history. Golden Gate Park has always played a central role in this history, from the Imperial Vienna Prater Orchestra performing on the then-new Music Concourse at the 1894 Midwinter Exposition, to today’s annual Hardly Strictly Bluegrass Festival. Golden Gate Park is so ingrained as part of music culture that there’s even a Futurama episode featuring a benefit concert called “Bend-Aid” in Golden Gate Park in the 31st century.

Since the dawn of the rock and roll era, Golden Gate Park has hosted numerous rock festivals. In 1969, the Grateful Dead and Jefferson Airplane played a large free concert in the Polo Fields. A huge crowd turned out in the Polo Fields in 1991 for the Bill Graham Memorial concert which featured Journey, Santana, Crosby, Stills, Nash & Young, and Bobby McFerrin. The Dave Matthews Band headlined a benefit concert for Bay Area charities in the Polo Fields in 2004. Since 2008, the Polo Fields and surrounding meadows have hosted the Outside Lands Music & Arts Festival.

Rolling Stone magazine declared the June 1967 KFRC Fantasy Fair & Magic Mountain Music Festival on Mount Tamalpais in Marin County to be the first U.S. Rock Festival.1 However, as noted in that story, the genesis for the Mount Tam event was a 1967 counter-culture event called the Human Be-In, which set the stage for future rock festivals.

As Bowen later told the San Francisco Bay Guardian, when Cohen, Bowen, and Alpert were first talking about a larger event, Alpert remarked that “it’s a hell of a gathering. It’s just being. Human beings. Being Together… It’s a Human Be-In.”2 The name stuck and planning began for the event that was subtitled “A Gathering of the Tribes,” because they planned to bring thousands of people together. They wanted to raise awareness of the issues behind the 1960’s counter-culture movement, such as personal empowerment, ecological awareness, and higher consciousness. Cohen later noted that they were also concerned about a philosophical split between the anti-war/free speech movement and hippies and wanted to stage an event to bring the two sides together.3

There were some planning problems for the Human Be-In. Cohen attempted to get a city permit for a peace rally in the Polo Fields, but City Hall did not want a big hippie gathering. However, Bowen was good friends with renowned attorney Melvin Belli and asked for his help.4 Belli sent his secretary to City Hall for a permit for his birthday party in the Polo Fields. There was no objection to a birthday party and Belli’s secretary easily obtained the permit. San Francisco was unaware that hordes of people would soon descend upon Golden Gate Park. 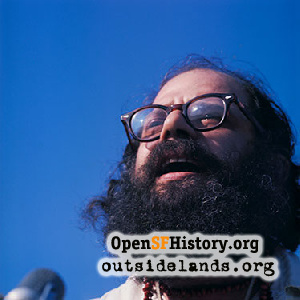 Bowen, the artist, created posters for the event. The posters promised “all San Francisco’s Rock Bands” would be there as well as seminal Beat Generation writers/poets such as Allen Ginsberg, Michael McClure, and Timothy Leary, and social activists like Dick Gregory and Jerry Rubin. Attendees were asked to bring flowers, incense, feathers, flags, animals, and musical instruments. Cohen and Bowen also publicized the event in a cover story in the San Francisco Oracle. The underground press and radio stations around the country also promoted the Be-In. Bowen conceived of the event as performance art and wanted it to be remembered and imitated in the future.

All of the planning culminated on January 14, 1967, when throngs of people began to descend upon the Polo Fields. It was a beautiful clear warm day with cloudless skies. Noted rock photographer Herb Greene and his wife walked to the Polo Fields, which was filled with people. Greene spent the day close to the makeshift stage as he was friends with some of the organizers and bands. He was fascinated with the people in the crowd though, and spent much of the day taking pictures of the people who came to see the event.

Dennis O’Rorke was a San Francisco letter carrier at the time and went to the Be-In because it was a big event happening in his “territory,” as he lived nearby in the Outer Richmond District. It didn’t hurt that the Human Be-In was free. O’Rorke found that the Polo Fields had a lot of people, but that there was still enough room to roam around. Crowd estimates varied, but somewhere between 20,000 and 30,000 people assembled in the Polo Fields.

It was a multi-generational crowd, dominated by young people to be sure, but which included parents and their kids, anti-war activists, hippies, and beatniks. Many people brought banners or artwork. The Grateful Dead’s sound engineer and underground chemist, Owsley “Bear” Stanley, produced large quantities of “White Lightning” LSD to hand out. Everybody was smoking weed or dropping acid, according to Greene. 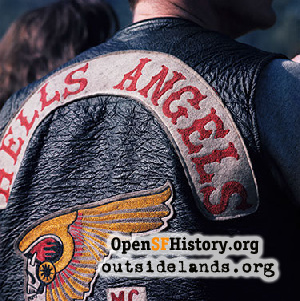 The Hells Angels provided “security” at the Be-In, which largely consisted of making sure that lost children found their parents, but they also brought a station wagon with refreshments. In her book about the Human Be-In, author Helen Perry noted that the Hells Angels were “well-equipped for the task of serving as a clearing house for lost and strayed children, since they had walkie-talkies and were well organized.”5

The stage was a flatbed truck with a gas-generated amplifier. There was no program for the Human Be-In. Poets recited, activists incited, musicians excited. Gary Schneider got the attention of the crowd blowing a horn, then he and Allen Ginsberg sat cross-legged on the stage and led the crowd in Hindu chanting.6 Ginsberg then played small cymbals while singing a song about peace in America, Vietnam, San Francisco, and other locations around the world. Michael McClure joined them and played an autoharp. Beat poetry publisher and City Lights bookstore owner Lawrence Ferlinghetti recited his poetry. Timothy Leary sported flowers in his hair, beads around his neck, and notably encouraged the crowd to “turn on, tune in, drop out,” a call for change that he had begun espousing the year before.

Then there was the music. At the time, there was no precedent for so many rock bands appearing together. Festivals featuring jazz or blues artists sometimes occurred, but a rock festival was something new. As promised on the posters, many notable San Francisco rock bands performed at the Human Be-In. During their performance, the Jefferson Airplane covered the Martha & the Vandellas’ hit “Dancing in the Street,” with Allen Ginsberg dancing wildly on-stage. Country Joe McDonald joined the psychedelic folk band, The New Age, on stage. The Grateful Dead performed three cover songs in their usual free-wheeling, jamming style and were joined on stage by legendary jazz musician Charles Lloyd, who played flute during a rendition of “Morning Dew.” Big Brother and the Holding Company and Quicksilver Messenger Service also performed. All the bands played for free. 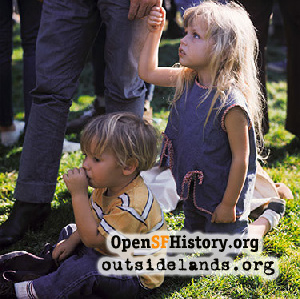 Dancers filled the stage and the field while the music played. Other musicians in town for their own shows, such as The Doors—who were playing at the Fillmore that evening on a bill with the Grateful Dead—and Dizzy Gillespie, were likely there.7

In the middle of the day, a parachutist appeared as if out of nowhere and touched down in the Polo Fields. Greene believes that Owsley set up the parachutist, but never found out if that was the case. Perry, in her book, said the crowd treated the parachutist as a “latter-day miracle.”

At the end of the day, the crowd was asked to turn toward the setting sun and encouraged to “open their minds” so that all places would turn into a thing of beauty. A speaker told “members of the establishment” that they were happy and proud to have them there in “our brave new world.” Ginsberg and Schneider then led the crowd in some final chanting.

Attendees were asked to leave the park clean and the masses did exactly that. O’Rorke remembers a lot of conscientious people who were sensitive to the “leave the park clean” attitude. As Perry noted, the police later reported that no group of such size had ever left any area so clean before. This was after the fact, as the police were not present at the Be-In. After all, City Hall believed Melvin Belli’s birthday party was taking place in the Polo Fields.

The media went wild over the Human Be-In. The event was covered in the media throughout the country. Long-time San Francisco Chronicle music columnist Ralph Gleason wrote that the Human Be-In was “an affirmation, not a protest… a promise of good, not evil. This is truly something new.”8 Later that year, Gleason founded Rolling Stone magazine with Jann Wenner.

Much like Watergate later was used to name every political scandal as a “gate,” the Human Be-In was used to name other conscious-raising events. There was a “Yip-In” in New York, a “Love-In” in Malibu, and a “Bed-In” in Amsterdam. A year after the Human Be-In, Rowan and Martin’s Laugh-In, which frequently featured politically-conscious humor and satire, debuted on television. “In” was in.

The music portion of the Human Be-In immediately began to be copied. In June 1967, the aforementioned KFRC Fantasy Fair & Magic Mountain Music Festival occurred on Mount Tamalpais in Marin County. It featured The Doors, Canned Heat, The Byrds, Jefferson Airplane, Steve Miller Band, Country Joe and the Fish, and many other rock bands. A week later, the first and only Monterey Pop Festival took place, which notably included Jimi Hendrix, Janis Joplin, The Who, The Mamas and the Papas, and, once again, Jefferson Airplane. These shows, considered the first true rock festivals in the United States, were heavily influenced by the Human Be-In.

The rock festival concept was an immediate success and has spawned numerous similar concerts in the nearly 50 years since. The Human Be-In also influenced James Rado and Gerome Ragni, who were then developing the musical Hair. The musical features a song called “Be-In (Hare Krishna)” and anti-war and consciousness-raising themes similar to those espoused at the Human Be-In. Hair opened off-Broadway in October 1967 and was the pioneer of rock musicals.

Greene, who was immersed in San Francisco’s counter-culture at the time, believes the Human Be-In was where the movement first realized that it had numbers. The Be-In organizers and others used this to advance the movement. They went on to form the Council for the Summer of Love which declared that the summer of 1967 would be the Summer of Love. San Francisco then became the focal point of the 1960s counter-culture revolution. Greene found this whole time period to be magical.

So the next time you go to a Lollapalooza or a Coachella or an Outside Lands music festival, remember that it all started in the Polo Fields in January 1967, when the place to be was the Be-In.

Herb Greene was at the forefront of rock photography in the 1960’s. As part of San Francisco’s counter-culture movement, Greene became friends with many of San Francisco’s nascent rock bands and began chronicling them with his camera. His work features photographs, of, among others, Jefferson Airplane, Led Zeppelin, Janis Joplin, Rod Stewart, the Pointer Sisters, Sly Stone, and, most notably, the Grateful Dead. Greene is considered to be the official photographer of the Grateful Dead, and he has released two books of Dead photos, The Book of the Dead and Dead Days: A Grateful Dead Illustrated History. His photos are on the cover of Jefferson Airplane’s Surrealistic Pillow album and two Grateful Dead albums, In The Dark and Dylan & the Dead. Some of Greene’s photographs can be seen on his website: http://www.herbgreenefoto.com/


Contribute your own stories about western neighborhoods places!