An Ocean View grocery is uncovered by the clues in a 1911 image. 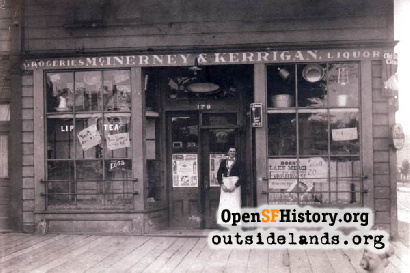 WNP member Glenn Koch has a keen eye for San Francisco architecture. When he came across a "real photo" postcard showing the front of McInerney & Kerrigan's grocery, he figured the business was somewhere in San Francisco.

The addressee on the back lived in San Jose, and in addition to the "Old Dutch Cleanser" and Lipton Tea ads, a close look in the store's right window reveals an interesting poster: 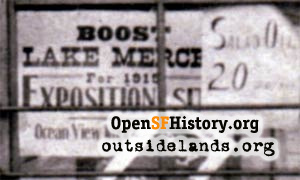 Many are unaware that the 1915 Pan Pacific International Exposition (PPIE) that celebrated San Francisco's recovery from the 1906 Earthquake and Fire, gave us the Palace of Fine Arts, and turned some mud flats into today's fashionable Marina District, could have taken place around Lake Merced. The final location for the fair was still being debated in 1911 when President Taft came west to break ground for the PPIE. With a silver shovel, he dug a spadeful of ceremonial dirt out of the Polo Fields in Golden Gate Park, one of the location finalists.

Neighborhood groups from the Ocean View, Excelsior, Parkside and other sparsely-settled southwest neighborhoods pushed for the candidacy of the Lake Merced location: businesses would boom from fair-going crowds, and major infrastructure improvements would accompany the fair's creation.

Based on the poster, McInerney & Kerrigan were likely selling their wares in or near the Ocean View. The slim glimpse of open land on the right implies the grocery was on a corner. Broad Street, the major commercial corridor of the neighborhood, seemed like a good guess.

A search under "Grocers" in a San Francisco directory from 1911 proved our guess right: McInerney & Kerrigan were listed at 179 Broad Street. But what might be surprising is the building still stands, now as 199 Broad Street at Capitol Avenue. The address isn't the only thing to have changed over the years: the board sidewalk is gone, and the business climate has seriously deteriorated over 100 years. But, hey, there's still a fire hydrant in the same place.

Thanks to Glenn for letting us post this great image. 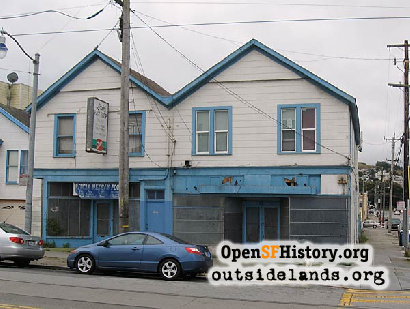