The Richmond District hosted the Army in 1898.

The Richmond District hosted the Army in 1898 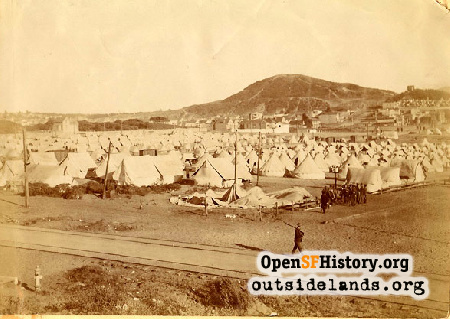 On February 15, 1898, the battleship USS Maine mysteriously exploded in the harbor of Havana, Cuba. Cuban revolutionaries and William Randolph Hearst's media empire accused Spain's oppressive colonial regime for the disaster and the loss of 266 U.S. sailors. After an American court of inquiry concluded an external mine had destroyed the ship, and amid calls to "Remember the Maine," the United States of America declared war on Spain in April 1898. 1

In the first battle of what became known as the Spanish-American War, Commodore George Dewey's naval squadron destroyed seven Spanish ships in Manila Bay on May 1, 1898. The War Department had expected the conflict with Spain to be fought primarily on the seas, and Dewey's win boded well for American success. President McKinley quickly used Dewey's triumph to shift the focus of the war away from Cuba and instead onto Spain's rich colonies in the Pacific. Naval war or not, McKinley called for the Army to recruit a total of 125,000 men, and directed forces to be marshaled in San Francisco for deployment to the Philippine archipelago.

By early May 1898, trains began arriving in Oakland with young men from Pennsylvania and Colorado, Oregon and Kansas---all coming to form a 20,000-man expeditionary force headed by General Wesley Merritt. Welcoming parties of the Red Cross Society met the units at the San Francisco Ferry Building with food and flowers. The mostly-volunteer infantries, feted and cheered along the way, would then march up Market Street to their campsites.

Early arrivers, such as the 6th California Infantry and 1st Washington Infantry, bivouacked on the eastern boundary of the Presidio of San Francisco army base. While the Presidio had ample open space, it had a limited water supply. The Army worried about sanitation issues with thousands more men on the way, and other encampment sites were sought for the troops due to arrive from eastern states.

An Army band leads a procession from the Richmond's Camp Merritt in 1898, n.d. - WNP collection

The Crocker Estate Company offered the government use of the defunct Bay District Race Track land, situated between the Presidio and Golden Gate Park. The site had enough space for 10,000 troops, with nearby city water mains available. The Army gratefully accepted, and starting on May 18, 1898 rows of white tents lined the sandy lots between today's Geary Boulevard, Fulton Street, Arguello Street and Sixth Avenue. An eventful summer for the Richmond district was about to begin.

Initially called "Camp Richmond" or "Bay District Camp" the growing encampment received the official name "Camp Merritt". Despite this honor, the eponymous commanding officer was rarely seen in the area. General Merritt roomed downtown at the Palace Hotel, and when he left his suite it was usually for soirees, parties, and balls in the city or down the peninsula at the estates of the wealthy.

With all of San Francisco abuzz over the war preparations and the city's role as jumping-off point, General Merritt and other officers found themselves with full social schedules attending the multitude of celebratory send-offs. The enlisted men and volunteers also received their share of attention in the Richmond district. 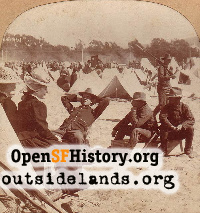 The "Boys in Blue", as the newspapers generally called them, were popular with admiring neighborhood children, eager Richmond merchants, and visiting parties of women bringing picnic lunches. The Richmond Banner warned mothers of "the impropriety of allowing their daughters to visit the soldiers' camp without chaperones" while acknowledging the "camping of the volunteer troops in Richmond has made a vast amount of difference to the business houses in the district. [...] Richmond is now the liveliest part of the city." 2

Adding to the liveliness was an explosion of bars, saloons, and "officers' clubs" around the camp. Already situated along "Beer Town"---an area of drinking establishments near Golden Gate Park---the camp was soon serviced by thirteen new "groggeries" before the neighborhood improvement group got the city to stop issuing liquor licenses. A soldier could remember the Maine at "The Maine" on First Avenue. Volunteers could toast the regular soldiers at "The Regulars' Home" on Fifth Avenue, or exchange pleasantries at the "US Army Exchange" down the block. The San Francisco Chronicle reported that women owned some of the bars, while others just used females as bartenders, and that there were "reports that soldiers, accompanied by women, have been served with liquor in back rooms." Music was also used as a way to get the soldiers inside, but it was "not of the symphony concert order." 3

As the number of soldiers in the Richmond approached 7,000, a camp extension had to be created on James Clark Jordan's adjacent land, today's Jordan Park neighborhood. On May 28, 1898 the division hospital moved to this section, and eventually troops from Montana, North Dakota, South Dakota, and Iowa would camp on these blocks between today's Geary Boulevard, California street, Palm and Commonwealth avenues.

The division hospital sadly received a lot of use. Poor sanitation and crowded conditions created a lot of illness and not a few deaths among the men in Camp Merritt. Over 150 soldiers crowded the field hospital on July 11, 1898 a number with pneumonia. 4

With the sand, fog, and sickness, soldiers remembered Camp Merritt as "an unhealthy, ill-drained, wind-swept locality". Joseph I. Markey of the 51st Iowa Infantry vowed that for all the hospitality of the locals and the delights of nearby Golden Gate Park, "We have hopes that at some time the truth will come out as to who is responsible for Camp Merritt's existence and that the guilty will not go unpunished." 5

Ten men died over the summer, from measles, typhoid and other diseases. Poor sanitation and close living was the chief reason for the sickness, but the Army didn't hesitate to blame the Richmond district location "to which hucksters and immoral and depraved persons within the city had access." 6

The Richmond Banner felt criticism of Camp Merritt (and the Richmond climate) as unhealthy was a conspiracy by downtown interests to hide the poor preparations of the U.S. Army and the city:

"If there had not been so many personal axes to grind, Camp Merritt would not have been considered such an awful place. The agitators would then have hunted for the real cause of most of the sickness. The fact that men were brought here from warmer places with little clothing and that of a poor quality, would be shown. The bedding would be examined and it would be seen that but little comfort could be had sleeping under a pair of thin cotton blankets after a hard day's drilling. No one should wonder that there has been sickness; in fact it is a surprise that the death rate has not been greater." 7 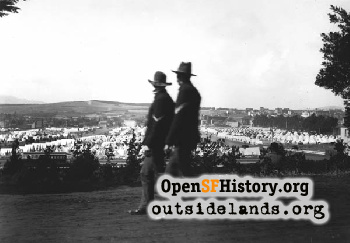 As units began shipping out, the Army decided to close Camp Richmond and move remaining troops back into the Presidio. By August 1898 Camp Merritt had returned to being sandy open land, although some of the Richmond merchants couldn't quite say goodbye to the easy profits. "A. Rehfeld of the Richmond Shaving Parlors has made many friends among the soldier boys and now that they are going to the Presidio he has decided to go partway with them. He has put up a building on Lyon street near Greenwich street where he has established a liquor store." 8

Spain gave up the fight after only seven months, and sold the Philippines to the United States for twenty million dollars. Unconsulted in this deal were the Filipino resistance forces, which had fought against Spain for two years and had declared national independence on June 12, 1898. To Filipinos, American colonial rule didn't look any better than Spanish colonial rule had. The Spanish-American War soon became the Philippine-American War, which dragged on for over a decade after the big victory parades that marched through U.S. cities in 1899. 9

Developer Fernando Nelson began filling in the Bay District Race Track site with homes in 1902. The sand that once blew into the coffee of irritated soldiers was buried under concrete, blacktop, and row housing.

On May 22, 1952, seven veterans returned to the Richmond district to remember old times and observe the installation of a commemorative plaque on the side of a building at 695 Second Avenue (at Cabrillo Street). The inscription on the California Historical Society plate recognized the camp location of the 13th Minnesota Volunteer Infantry. One of the veterans, Charles H. Craigie, actually wore his 54-year-old uniform and danced for reporters. "None of us feels as if we are exactly fading away. We don't look so faded, do we?" 10

Fifty-four years later, the plaque has disappeared from the building. Camp Merritt, and the Richmond district's small role in a long war, is now commemorated by a faint rectangle and four bolt holes.

Update: The plaque was found and remounted to the building in late 2008. Thanks to the owners of 695 Second Avenue for finding it!

More on Camp Merritt:
Read diary entries from a soldier of the time on this very nicely-done site by John Asendorf.

Notes:
1. The primary resource for this article is Stephen D. Coats, Gathering at the Golden Gate: mobilizing for war in the Philippines, 1898, Combat Studies Institute Press, Fort Leavenworth, Kansas, 2006. The entire publication can be downloaded and viewed online at http://www-cgsc.army.mil/carl/resources/csi/content.asp#gathering

5. Allen L. McDonald, The Historical Record of the First Tennessee Infantry, no date, pg. 5, and J.I. Markey, From Iowa to the Philippines, A History of Company M, Fifty-First Iowa Infantry Volunteers, Red Oak, Iowa, 1900, pgs. 108-116. A great synopsis of troop attitudes on Camp Merritt is in chapter ten of Erwin N. Thompson, Defender of the Gate, The Presidio of San Francisco, A History from 1846 to 1995, National Park Service, Denver Service Center, July 1997.