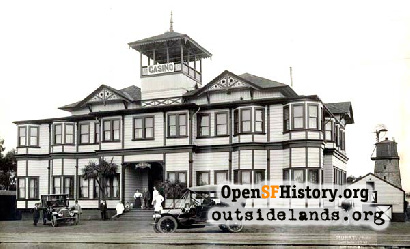 The Casino Roadhouse at 24th Avenue and Fulton Street., circa 1910 - Photo by A.L. Murat

In 1882 the Daeman brothers erected the Casino as a restaurant and bar in Golden Gate Park near the Conservatory of Flowers. The Casino never had a good reputation, and perhaps the serving of liquor contributed to activity not in keeping with values the public wanted displayed in their park.

H.H. Dobbin remembered that the Casino "was leased by the Kerline family of Tivoli's fame as a cafe and refreshment parlor. They made money rapidly." The building was moved a short distance away from the Conservatory and raised a story in 1890. Soon after, the restaurant with a poor reputation was closed to protect the public from its sphere of moral corruption. For a short while the building was used as a small museum and as park offices.

In 1896, the Casino's boisterous origins were revived when Stewart Menzies bought the building and moved it out of the park to the corner of 24th Avenue and Fulton Street in the Richmond District. Now a roadhouse, the Casino was situated halfway between the good times of Beertown on the east and the roadhouses and revelries offered at Ocean Beach. The surrounding area was uninhabited enough that the patrons could be loud, and removed from the strictures of Golden Gate Park, the Casino was still close enough for park visitors to step out of the greenery for a beer. The streetcar soon passed in front, and when automobiles made their appearance there was plenty of parking space.

The Casino became infamous as the banquet location where San Francisco supervisor Dr. Charles Boxton asked the Parkside Realty Company "How much money is in it for us?" Known as the "black flag" speech, the declaration laid bare the pre-1906 goverment corruption in San Francisco.

In later years the roadhouse was operated by Carl Stonheardt. The building was torn down in 1922 when Richmond District homes started to surround the old roadhouse. 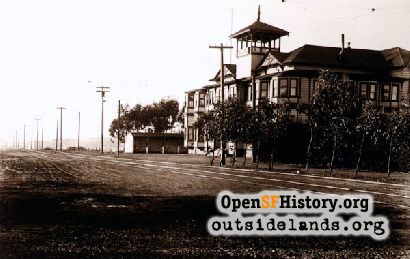