The Cliff Road Chop House or Death at the Acropolis

The Cliff Road Chop House or Death at The Acropolis

In early 2012, the new Lands End Lookout Visitor Center began taking final shape on Point Lobos Avenue just east of Merrie Way. Few people, though, realize the site of the shiny new visitor center has a much darker history as the location of the ill-fated “Acropolis Chophouse.”

The chop house on Point Lobos Avenue was the largest of several vending stands located along what was then called “Cliff Avenue” between Sutro Baths and the steam train depot at 48th Avenue. These stands, originally built as informational and concession kiosks at the 1894 Midwinter Fair in Golden Gate Park, had been purchased by Adolph Sutro at the fair’s end. He acquired at least twenty, many going into his new Sutro Baths to serve as display cases while others were re-erected around the grounds of Sutro’s mini-amusement park called (alternately) the Midway Plaissance, Merry Street, or Merrie Way. 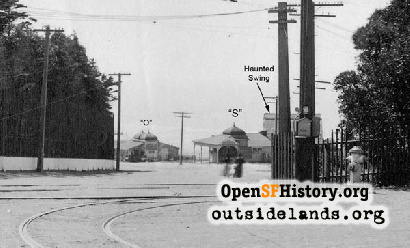 The midway’s attractions included a Firth Wheel, a Scenic Railway, a Haunted Swing, and a Mystic Mirror Maze, all recycled from the 1894 Fair. [Read more on Merrie Way on this page and this page.]

Sutro had several of the recycled kiosks sited along the north side of Cliff Avenue, carefully positioned to intercept visitors walking downhill from the train depot to the Cliff House and Sutro Baths, or lingering at the Merrie Way rides. The 1899-1900 Sanborn fire map of Cliff Avenue reveals there were originally nine kiosks lining the street. 1

Sutro must have calculated that Merrie Way and the Baths would be such huge attractions that he could lease all nine kiosks to eager concessionaires. But his vision turned out very wrong. Adolph Sutro died in August 1898, and within a year the rides and attractions along Merrie Way began to shut down, possibly as a cost-saving measure ordered by his executrix-daughter Emma Sutro Merritt. Photos taken at the turn of the 20th century reveal an abandoned midway with several kiosks standing empty, marred by broken windows and “To Let” signs on their fronts. 2

By 1910 only two stands remained – the Chop House and a fruit stand located about 80 feet to its west. 3 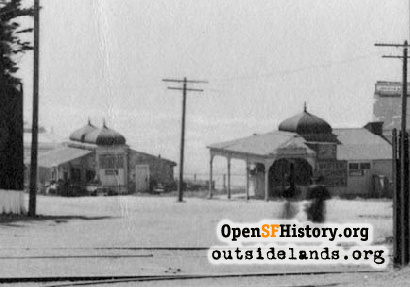 City Directories indicate the chop house opened around 1898 as “The Acropolis Oyster Stand," operated by Manuel Varvare (also spelled Vavare, Varvaris, and Varvares in various documents) who ran the stand until his death in 1908. Over the years, he advertised it variously as an oyster stand, a lunch stand, a restaurant, and a chop house, the changing descriptions probably reflecting both the physical growth of the structure and its menu. 4

By the turn of the century, the Acropolis restaurant consisted of the original 1894 kiosk and a welter of lean-to additions that housed a kitchen and dining room and a standup oyster bar. Varvaris lived in a small room at the rear (north end) of the restaurant, close to the tracks of the abandoned Scenic Railroad and the empty midway. 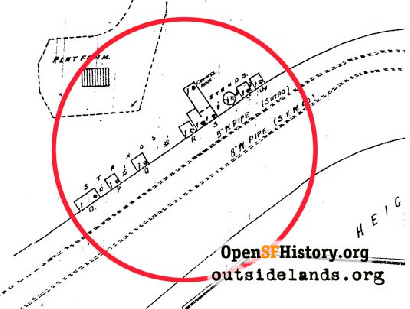 Business must have been very bad following Sutro’s death and the ensuing demise of Merrie Way, and Manuel Varvare tried to sell his “Acropolis Chophouse” twice, first in 1899 and again in 1901, stating in the newspaper ads that he planned to go to Europe. But he apparently either changed his mind or couldn't find any takers. 5

Not only did the spelling of Varvare’s name change in the City directories, but so did the Acropolis’ address. At various times it was shown as “Cliff Avenue near Sutro Heights,” “Cliff Avenue near the Cliff House,” “5 Cliff Avenue,” and “840 Point Lobos Avenue.” Varvare couldn’t seem to decide on the restaurant’s location either, describing it as “Sutro Heights” and “half a block from the baths” in advertisements.

Varvare also had exceptionally bad luck with his patrons. The San Francisco Call reported in February 1905 that a trio of soldiers refused to pay for their meals at the Acropolis, and when the proprietor demanded payment, “They attacked Vavare [sic] with knives, cutting his clothing and body. They also beat him on the head and body with a club.” 6

Things would get much, much worse.

Three years later, on February 7, 1908, an armed robber held up Varvare in his restaurant, forcing him at gunpoint through the dining room, kitchen and tiny bedroom, and taking $87 in gold eagles and pocket change. The robber then wrote down Varvaris’ name on a scrap of paper and threatened to return and kill him if he reported the crime to the police.

True to his word, the robber returned to the restaurant four days later. The Call reported what happened:

“Friday night [February 21] Varvaris heard a heavy knock on the front door of his restaurant at 5 Cliff avenue, the scene of the first robbery. Believing it was a customer he opened the door. No sooner had he done so than the thug attacked Varvaris, beating him with the butt end of a 45 caliber revolver, fracturing his skull. Leaving his victim to die the robber disappeared, but not before the victim had recognized his assailant as the man who attacked him the previous occasion.” 8

Manuel Varvare died at French Hospital on March 7, 1908. “The police admit that as yet they have not the slightest clew [sic] to the identity of the murderer.” 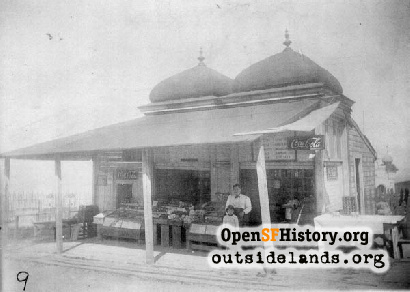 Following Varvaris’ murder, the Acropolis Chophouse was taken over by Nicholas Antipa, the owner of the neighboring fruit stand on Cliff Avenue. The Antipa family apparently continued to operate the Acropolis for a few more years, and then either closed it down or converted the restaurant into an expanded fruit and candy stand. (The old directories give conflicting addresses for the Antipa family’s holdings.) No listings appear after 1917, and it's likely the old restaurant stood vacant for several years. 9

In 1922, the city widened and realigned the former Cliff Avenue, and in the process demolished the old Acropolis and Antipa Fruit Stand. 10