The Circle of History

The Circle of History 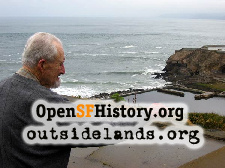 Well, perhaps it isn't a circle, but certainly there's some shape to the way a chance meeting can develop into a fascinating story. Most of the material members see in the Western Neighborhoods Project newsletter or on the Web site comes to us in a fairly convoluted way.

February of 2006 I met Loretta Wasacz at the Balboa Theater's birthday celebration. She told me her 88-year-old father Walter Borman had grown up in the outer Richmond district and perhaps we'd be interested in interviewing him sometime. In May 2006 Loretta, Walter and I took a ride through the rain to view Richmond blocks through Walter's memory of the 1920s and 30s.

We heard about the Alexandria, Balboa, and Coliseum theaters; streetcars rumbling up different paths to the beach; Land's End shipwrecks; and fishing on "Dead Man's Rock" with Italian fisherman. Walter saw the Golden Gate Bridge being constructed; attended the opening years of the new Lafayette School (1927) and Presidio Junior High School (1930). He remembered when the renowned Pacific Cafe on 34th Avenue and Geary was a grocery store owned by Mrs. Clark and then was Minchen's Drugstore. (Across the street, on the southwest corner of 34th and Geary, Minchen's father ran another grocery where he bootlegged liquor during Prohibition). Then Walter mentioned Hall's Soda Fountain on Balboa that his friend Dottie's family ran, and how he thought he had some photos of it. 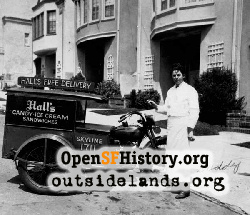 I had never heard of Hall's, but soon after had two wonderful photos in the mail courtesy of William Hall's daughter. Some checking of old San Francisco directories showed William Hall, "confectioner", was in business next door to the Balboa Theater (where this whole story started) from about 1928 to 1934. The 1930 United States Census lists the entire Hall family (William and Hazel with three daughters) living upstairs from the shop at 3626 Balboa Street.

Playing history detective, I can more specifically date the store interior shot. In the upper left corner a sign reminds customers of Mother's Day on May 12. In the time period we're working with, that means either 1929 or 1935. Because beginning with the 1934 San Francisco directory a Mrs. Jennie Simpson appears to take over the shop at 3626 Balboa, the photo is very likely from 1929.

So with help from Loretta, Walter, and Dottie (and her next-door neighbor Bryan, who had the photos scanned for us), we have two wonderful images of Richmond history, when candy stores and soda fountains were community meeting places and the family running them lived just up the stairs. 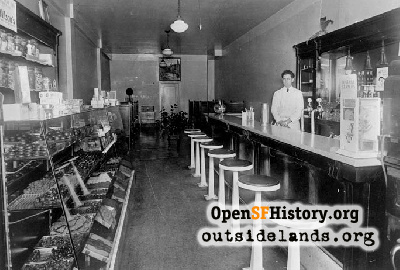