Confessions of a Junior Sex Fiend

Warning: Some explicit language/situations. Memories of a Richmond District boy discovering the opposite sex in the 1940s.

Confessions of a Junior Sex Fiend 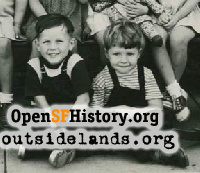 Here's me and my best friend Jimmy Walker. It's the autumn of 1946 and we're sitting together for our Lafayette School kindergarten class picture. Jimmy lived next door and we did everything together. In first grade, we walked to Lafayette together every morning and we walked home together in the afternoon. When it rained, we wore the same yellow raincoats and the same shiny black rubbers we were supposed to pull on over our shoes, except we never could unless Mrs. Bradley helped. If we saw Billy the Bully coming down Anza Street, we ran away together as fast as we could.

And we were together the day we discovered girls were, uh, different than boys. 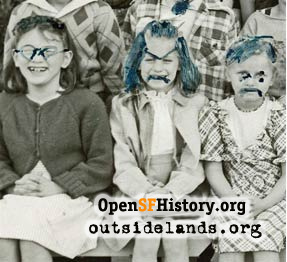 I think this might be Helen with her little purse. She lived up the corner. You could see her better if someone hadn't decided it would be funny to make her look like a vampire with blood drooling out of her mouth.

One day, Jimmy and me and Helen were hanging out on Helen's front lawn when someone, I have no idea who, suggested we play doctor. Maybe it was Helen.

No, it couldn't have been Helen because she didn't know how to play doctor. I had to explain: "It's easy. You pretend to be sick and the doctors have to examine you. So you start by taking your underpants off." I sounded worldly, but actually, I had never played doctor either. At least not with a girl.

She said, "Okay, if that's how you play. But you have to show me yours too." We negotiated for a while and then retired into the garage where we got down to bare essentials.

"Gosh, Helen! What happened to you?" Helen didn't think anything much had happened but, after we showed her ours, she had to admit she must have had an operation when she was little and they cut hers off.

That sounded logical. But, it was funny. It didn't look a bit like a wound.

Later, Jimmy and I were in our favorite hideout – the cupboard under the sink in Jimmy's kitchen. We could get away from grownups in there, relax and eat dog biscuits. There was a whole sack of them. Pink, green, grayish black – they looked like Necco wafers - except they were dog biscuits of course.

We were discussing our favorite subject – how could we get Helen to take off her underpants again? We thought and thought and pretty soon Jimmy said, "You know, it's a funny thing, but whenever we talk about Helen taking her underpants off, my peenie gets hard."

Jimmy thought maybe it was the dog biscuits.

We never did get Helen to take her off underpants again. Most girls wouldn't do that even if you got up the courage to ask them. But some might.

As I got older, I used to stop in at Wincott's Fountain at 45th and Balboa on the way home from school to see if the new Donald Duck was in. But I often got distracted by another comic book – Sheena, Queen of the Jungle. 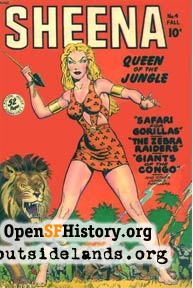 Look at that rippling blonde hair, those icy blue eyes, that deadly spear in her hand - but mostly, look at that leopard skin she's wearing. I'll bet she's not wearing underpants! Where would a girl way out in the jungle get underpants?

I wasn't so dumb as to think some artist would sneak in an anatomically correct Sheena bottom right on the fourth panel of the third page. Even an eight-year-old kid knows better than that – but still, she might accidentally bend over somewhere in the story. You never knew about these things. So I read right through until Mrs. Wincott told me to put that comic book back right now.

I wasn't always a sex fiend, you understand. For instance, I had a big crush on Ruth, the little girl who lived on the other side of the vacant lot. I longed for her to wave at me from her kitchen window. Even noticing I existed would be enough. I never thought about Ruth with no underpants on. I loved her! That would be wrong! So I sat in the big kids' tree fort and sang The Little White Cloud That Cried as loud as I could and waited to see if she might come out to listen.

Once and once only, her mother waved at me from the back stairs.

When I was nine, Jimmy's mother decided he was going to be an entertainer when he grew up, so he had to take piano lessons and tap dancing lessons, and pretty soon he could sing Everybody Has A Laughing Place Ho Ho Ho while he played it on the piano. But he didn't have time to play with me anymore. So then I became best friends with Peter Walters, who lived down the corner of 47th and Balboa. Peter was a fun kid, even though he was a year younger than me. One thing we had in common was…he was a sex fiend too.

Whenever Peter and I could scrape fifty cents together, we'd head straight for Playland-at-the-Beach, the big amusement park just down the hill. 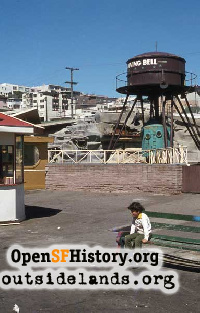 One thing you didn't want to do at Playland was to waste your money on rides. Even the cheap ones cost fifteen cents. If we went down in the Diving Bell once, we might have money left for peanuts, but that's all. So, prudent young people that we were, we headed straight for the penny arcade.

We could find out how much we weighed at the penny arcade for one penny, but for anything else you needed a nickel. For a nickel, the penny arcade opened its shining doors of pleasure. Row after row of gleaming pin ball machines waited for us, glittering boxes loaded with flippers and snapping bumpers. We could almost hear good old Joe DiMaggio, on the glass of the first one, shouting, “C'mon and play me.” Next to him, a curvaceous blonde who looked like Sheena Queen of the Jungle, winked at us to let us know how much fun we would have at her game. Against the wall was a submarine fighter, where you could take aim through the periscope and blast Jap battleships right out of the water. There were little men on racks who played baseball and steam shovels that dug up prizes for you in the jelly beans if you worked them right, and machines that tested your love power, or how big a shock you could take.

Most exciting of all were the peep show machines, standing in a secluded corner, where for a dime we could watch hoochie-coochie dancers doing the striptease. We were too short to reach the viewing slot, but, fortunately, the management had left a wooden stool nearby for any extra short customers that might drop in.

Ten cents was a lot of money, but we weren't dummies. If each of us stood on the stool on one foot and put our heads together, we could get twice as much flickering excitement for our dime.

The film must have been on a loop, because the dancer started wherever she left off when the last sucker ran out of money. There she was, in crackly black and white, undulating, smiling, welcoming little boys into her parlor. If we hit the jackpot, she'd be nearly naked already. But really, how likely was the last guy to quit just when she was taking off her last stitch? You needed perseverance and deep pockets of cold cash, neither of which were our strong point.

But once...look at that, Peter! The striptease dancer threw off her filmy shawl to reveal...something! Too shadowy to make out exactly, we were pretty sure she was only wearing little round things with tassels. Then, our last dime clinked into the coin box and the curtain snapped shut. It was over. There was nothing left but to hike back up Balboa Street towards home.

So, what did we learn on our quest for forbidden knowledge? Not too much, really. In fact, we weren't talking about naked girls at all. We were talking about last night's chapter of Flash Gordon's Trip To Mars and how would Flash get out of the collapsing room before he got squished like a bug. But, maybe, we had added a tiny bit to our store of knowledge of the female sex.

We already knew about the girls at school, with their leatherette handbags and navy blue skirts, to whom we never spoke and to whom we wouldn't know what to say. We knew about the little girl at Cabrillo playground, so perfectly perfect in her corduroy overalls and her tomboy tricks. If she went to Lafayette, which she didn't, either one of us would have kissed her valentine before we dropped it in the valentine box. There were our mothers, of course. They were in a category by themselves out there, somewhere beyond perfect but before God.

And now there was this fourth kind – girls that tasted better than Jujubes and made you feel funny inside, and made your peenie get hard, and you wanted to see more and more. But then, when you spent your last dime, the shutter snapped shut.