The spiritual heir of Playland-at-the-Beach 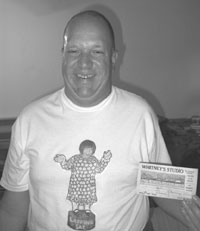 We traveled to Grass Valley to interview Warren Crandall (who never lived or worked in the western neighborhoods) because of his unique lineage and special knowledge of the beloved amusement park of the past: Playland-at-the-Beach

"My grandmother Dorothy's father worked for a soda pop company that eventually became Cragmont, and he was a district manager and Playland was part of the district. He started selling sodas out there when the Friedle Brothers were still in control of most of the place. All of the concessionaires always had free tickets for their families to go out there, so my grandmother used to go out there all the time. She rode the carousel the first time it was out at the beach in 1914."

Warren's great-grandfather, the soda representative, received a phone call from the Friedles saying they were selling out to two brothers by the name of Whitney. "They invited the family to go to the house and have dinner with them and then they had a last farewell night at the park. They figured that was going to be their last night of free rides." Coincidentally, Dorothy was already dating Roy King, whom she didn't know was the nephew of George and Leo Whitney. "About a week later my grandfather said his uncles had just bought an amusement park over in San Francisco! She was a little familiar with it."

So Warren had two connections to Playland-at-the Beach, which was definitely a family operation. "My grandfather had about ten brothers and they all worked out at the beach during the Depression. Everyone needed work then." Many operated rides, but Roy for a time created the cupie dolls that were given away as prizes. "Supposedly George ripped him off, didn't pay him the amount of money they agreed to. I don't know."

The bickering and arguments between family over the operations and business practices at Playland was, sadly, a recurring theme. Feuds began at Playland that still haven't ended. Regarding George and Leo Whitney, Warren grew up hearing stories good and bad. "The bad stuff I just laugh at because it's typical carny mentality. I heard they were both very generous and provided family jobs, but on the other hand I heard people were expected to kow-tow to them.

"My mom has a lot of unhappy memories of Playland. She spent just about every weekend there. Most of what I heard about Playland as a kid was a lot of the family garbage that was going on around Playland's demise, about who was suing who. That was just a great big mess. Everybody in the family blamed each other."

Warren's mother didn't take her son to the park because of all the family arguments. He holds just a dim memory of getting on "The Whip" one time. Asked what he'd ride if he could go back, he didn't hesitate. "Oh, I'd hit the Big Dipper, but then again I can still experience that because they have the same layout down at Santa Cruz (Beach Boardwalk).

"I wish my folks had taken me a lot more. I did ask my mother about that and she said the whole idea of going over there with the family starting to fight with each other... To them it just wasn't a happy thing.

"An amusement park is about money and all that, but it's not just about money. It's about having fun and happy times. Certain people in my family got that it was about money but didn't get the fun part. And I feel that they missed out and that I missed out on it too. I don't think George ever instilled in his kids that it was more than the carny-type thing of getting money as quickly as you can. That it's supposed to be a fun place, and to me that's just sad." 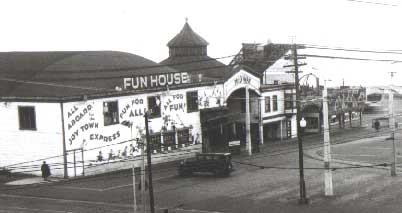 Warren rightly pointed out that Playland exists today in pieces. The Santa Cruz Beach Boardwalk has several of the Skeeball machines, and pieces of the Loopo Plane and Scrambler. There are Fascination games still operating on Market Street. The original Laffin Sal is in the collection of John Wickett with its back-up chuckling at people at the Musée Mécanique. But most famously, the carousel which helped create Playland now spins off Fourth Street downtown in Yerba Buena Gardens. Bought at auction when the park closed in 1972, it did time in Long Beach for a few years before San Francisco wanted it back.

"That carousel was actually built in 1906, you know. The Looff Company was going to send it to a little amusement park that was originally on Market and Van Ness, but that was all destroyed by the earthquake. The carousel hadn't been shipped yet, so instead of sending it out here they sent it to Seattle---Luna Park in Seattle---and that park was destroyed in a fire. The Looff Company maintained ownership of the carousel the whole time; I guess they leased it. The carousel ended up at Playland in 1914, when my grandmother rode it for the first time."

What would become Playland-at-the-Beach was essentially built around the carousel. "The stuff that was at the beach was all separately owned by various concessionaires and the Friedle Brothers started buying everything up as people went under and pulled it all together. The Looff Company had a 50% interest for awhile and they built the Big Dipper roller coaster."

Warren thought Playland's downfall began when the Big Dipper was demolished in 1957. He had heard the city inspectors had told the Whitneys quite a bit of work had to be done to keep the roller coaster safe. Rather than put in the money for the work, George and Leo deconstructed it. "I think it was the biggest mistake they ever made. You don't demolish your number one money maker."

Marvin Gold, a former employee who met his wife at Playland, dipped back in his past by running the restored carousel at Yerba Buena Gardens for a time. He told Warren how every Wednesday night they would grease the bumper cars. "George would show up with a great big barrel of graphite after hours. Marvin would show up with a big bunch of his friends. The way to spread the graphite around was to drive the cars, so George would always bring a couple of cases of beer and they'd get schnockered driving bumper cars."

The Whitney Brothers managed the Cliff House and Sutro Baths for the Sutro family before they bought both outright. The interior of the Cliff House was all designed by Leo (soon to go away with the Park Service renovations). Warren talked briefly about the big gift shop that stood next to the Cliff House, named the "Red Room".

"That burned down in 1963, the year I was born. That one was accidental," he laughed. What has been long-suspected as not accidental was the big fire that destroyed Sutro Baths in 1966. The official story had boys playing with fireworks accidentally torching the recently-closed edifice. Warren smiled: "That's the official story."

"They were in the process of selling it. The place was losing money big-time and that wasn't their baby. Playland was their baby as far as they were concerned. They weren't going to lose their shirts over Sutro Baths. And some interior demolition had actually started. The sale fell through and all of a sudden the Whitneys found themselves with this property that had been partially demolished and no interested buyers." Warren goes on to paint a romantic picture of all the Whitney family journeying to the Baths for a last goodbye. (Read Warren's story about the fire on our message board.)

Since he didn't grow up visiting Playland, and the park was more often a source of pain for his family, it's surprising that Warren has become such a zealous fan and researcher of the park. How did it happen?

"I think what got me was when I saw the carousel at Yerba Buena Gardens fully restored and that moment I stood there and cried. I thought here's the most beautiful piece of machinery, that had once been part of my family, and I started feeling a real sense of pride that my family had been such a big part of San Francisco history. I had my daughter with me, and I thought I'd be just a damned fool if I don't start asking people about Playland."