The assembly-line methods of home construction in the Sunset District from the 1920s to 1940s have been criticized for producing "cookie-cutter" architecture: rows of almost identical houses with minor facade embellishments differentiating each residence.

Henry Doelger, the predominant builder in the area, fought against this characterization by advertising model homes with distinctive names such as the "Rainbow House," or the "Styleocrat." Each house was still a product, with Doelger constructing a hundred "Styleocrats" across the avenues, but there are variations to be found in the land of stucco. This page is dedicated to those with a discerning eye, and will be updated as new Doelger styles are discovered.

Doelger-built home across the street from Lawton Elementary School. Sold for $2,500. -

'The Styleocrat,' built by the Henry Doelger Company. News copy: 'Second in '41--Named the Styleocrat, this smart model home, built by Henry Doelger and furnished by Lachman Brothers, is being opened for public inspection today at 3430 Moraga Street. This is the second exhibit home to be opened by Doelger since January 1. It follows modern lines of architecture.' - San Francisco Examiner

Architectural trends moved to Streamline Moderne in the early 1940s, which meant even less work for builders like Doelger. "Modern" meant sleek and sparse, and less material to deal with on facades and roof lines. Instead of the open stairways, the "tunnel" entrance became popular.

San Francisco Examiner, January 1941: "...this smart model home, built by Henry Doelger and furnished by Lachman Brothers, is being opened for public inspection today at 3430 Moraga Street. This is the second exhibit home to be opened by Doelger since January 1. It follows modern lines of architecture." 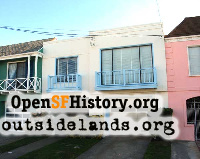 With the minimalist modern style, what individual features could a builder like Doelger promote? No interior embellishments could translate to efficiency ("easy housekeeping"), and plain walls could be "color-styled."


This home has all the answers to your demands for easy housekeeping and real living. Spacious and sunny rooms... tiled bath with stall shower... and dandy breakfast nook in the trim modern kitchen. Housekeeping is on a new high in this color-styled Doelger home.

Completely furnished by The John Breuner Co. of San Francisco.

The United States' entry into World War II brought a patriotic name to the Doelger line. Built smaller and cheaper for an uncertain housing market during wartime, the Freedom House was advertised as:

Although it's difficult to identify what this model home has in common with the seaside cottages of Massachusetts, the "Nantucket" was advertised as a last-chance opportunity during the war:


"The Nantucket and about five sister homes of the same type, all in Doelger City, are the last homes throughout the entire Sunset district in this particular price range and size that will be available to the home-buying public for the duration of the war.

"Our future building program will be almost entirely in lower priced smaller homes designed to meet defense housing needs. Hence, those families that desire the extra space and comfort convenience offered by the Nantucket and her five sister homes will have to act at once."

When patriotic GIs returned from World War II, Doelger had American Colonial-inspired homes waiting for them.


Real Living... you can afford! The Westridge. Stunning Colonial Home!

Lachman Bros. completes this story of good living with colonial furnishings appropriately priced.
Remember... in a Doelger Home you can afford to live well.
Veterans Preference.