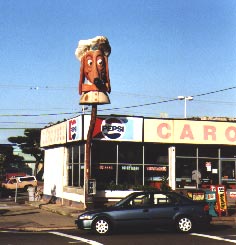 Nearly three months after a cruel April Fool's Day tumble, the historic Doggie Diner dog's head sign on Sloat Boulevard was restored in a ceremony on Saturday, June 30, 2001. As the crowd of several hundred dog's head aficionados counted down from 10, a Department of Public Works crane slowly lifted up a white sheet, revealing a newly refurbished and sharper-looking dog's head.

The dog's head odyssey began with a chain of fast-food restaurants called the Doggie Diner. The chain opened in 1949 and reached the height of its popularity in the 1960's and '70's with restaurants throughout the Bay Area. Outside each restaurant stood a 7-foot tall fiberglass dog's head--modeled on a red dachshund--with white hat and blue tie that was a big hit with kids and adults alike.

The Doggie Diner, however, fell on hard times and ultimately went out of business in 1986. Slowly, the famed dog's head signs began disappearing until there was only one left standing, outside the former Doggie Diner at the end of Sloat Boulevard across from the San Francisco Zoo. 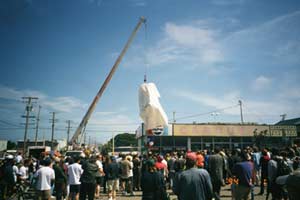 The sole remaining dog's head sign came to be owned by the next door Sloat Garden Center. They caused an uproar by proposing to take down the dog's head and donate it to a museum. After public outcry and protest (primarily led by Diana Scott and Joel Schechter's Ocean Beach Historical Society), the San Francisco Board of Supervisors, led by Supervisor Gavin Newsom, stepped in and worked a compromise in March 2000. In the deal, the City gained ownership of the dog's head and obtained an easement to keep it in place through at least 2005.

Mother Nature had other plans, however. On April 1, 2001, high winds caused the badly rusted pole to give way and brought down the famed dog's head. The fall crushed not only the dog's nose, but a phone booth below the sign.

The San Francisco Department of Public Works immediately announced plans to restore the dog's head to its perch. The city put up half the cost of the restoration and donations were sought for the rest. Newsom started by giving up one of his paychecks. Painters Union Local 4 donated their services to the project. Citizens rallied to help. Artist Anna L. Conti held an exhibit of her paintings featuring the doggie, with a percentage of the sales going to the restoration project. The Ocean Beach Historical Society continued their work consulting and lobbying for the head's quick repair. 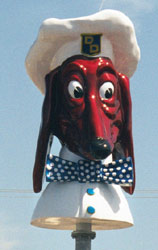 On Saturday, June 30, 2001, the restoration project's efforts came to fruition. The crowd began gathering early in the morning for the scheduled 10:30 a.m. ceremony. A sheet covered the newly restored dog's head, with a crane prepared to unveil it. As some speakers made statements, the crowd began to chant "Long live the dog!" Newsom was present to show his support. He bemoaned the fact that it "took an act of God on April 1st for something to be done."

The unveiling was delayed though, by a late-arriving Mayor Willie Brown. The crowd did not appreciate the delay and a new chant was raised, "Don't wait for Willie." Arriving 40 minutes late, Mayor Brown ignored the boos when he was introduced and joked that it was his head on the pole. Brown added that "Mother Nature forced us to rehab this landmark," comparing it to how the 1989 Loma Prieta earthquake had forced them to restore City Hall and other city buildings.

Soon after Mayor Brown's remarks were over, so was the wait. The crowd counted down from ten as the crane slowly unveiled the newly restored dog's head sign. Bright and full of color for the first time in many years, the dog's head was an immediate hit with the crowd. No longer a cruel April Fool's joke, the landmark sign had been restored to its former glory.

The 700-pound landmark stares out over the Zoo grounds, defiant to the beach fogs and salt air.

See Zippy the Pinhead and the Doggie!