Ocean Avenue fixture for over 30 years. 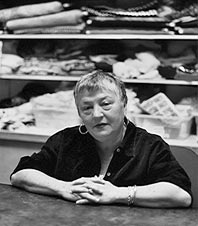 Rita Rivera Doyle can be found almost every day at her Ocean Avenue business, "Lili Knits". Rita's loyal customers are legion, as for over 30 years Lili Knits has created prom dresses, formal wear, and pep squad uniforms for individuals and organizations across the city and the Bay Area. A lively, generous personality, Rita's a smart woman who doesn't forget anyone's name, and freely shares her strong opinions on the neighborhood and especially on Ocean Avenue:

"...this could be a wonderful, wonderful place. It will never be West Portal. I don't care how many trees they put here, just look around. You've got stores right on Ocean Avenue that are not even businesses that deal with customers, so how are you going to improve this neighborhood?"

Her memories of Ocean Avenue businesses: "I'll tell you one of the best was right where this little Asian restaurant is at right now, it was called Betty's Hamburger. That was the best. Truck drivers, everybody would stop there. She looked like--do you remember the TV show, what was it, where the waitresses had the little hanky with the flower. This is how she looked. Her husband worked in the kitchen, and her sister. You got the best hamburgers. It's what you'd call an old-fashioned American restaurant. Okay, on Tuesday, there'd be meatloaf. On Friday, she'd have fish, right. Every day there was a regular menu, but there was a special for that day. It was real, real nice."

On moving to the OMI in 1968: "Oh, no, they warned her [Rita's mother] not to come here. They told her this is not a good neighborhood, the crime rate... I'm going to tell you, when we came here, I remember opening day. They welcomed us, the neighbors, the people that live in the community. Like I said, I can't say nothing but nice things about the people that we've dealt with. [...] See, sometimes people are so stupid. The houses, as soon as African American families moved in, people moved out. What is that about? Do you know what I'm saying?

"This is a lovely neighborhood, and these people work hard for these homes that they have here. I see now a lot of different nationalities here, but mainly it was primarily black and white. Everybody seemed to get along. There was no problem. It's just that sometimes people, their stupid little fears. It was crazy."

More business memories: "Inside the Cookie Tree they made sandwiches, roast--it was like a hofbrau. Then after that, it became a little clothing store. Actually, it was the best when it was the Cookie Tree, and the man wasn't really interested in the business, and I think he had a little money to throw away, so he opened this up. You know how men are. You guys get disillusioned quick, and that was the end of that."

On OMI's changing demographics and reputation: "I think a lot of Caucasians and African Americans are moving to Antioch. They're moving away from here. They've been here long enough. But I'm going to tell you something, when they were here, there was nothing wrong with this neighborhood, nothing wrong, just a bunch of stupid, ignorant people that thought, 'Oh, this neighborhood's no good because this element lives here.' That's a bunch of malarkey."