Ella (Gross) Driscoll has lived in Ingleside Terraces since 1963, but grew up with a twin sister in the outer Sunset District 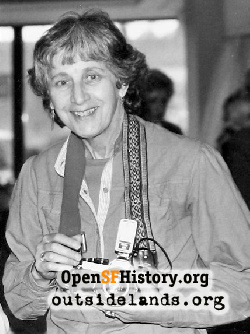 A San Francisco native, Ella (Gross) Driscoll has lived in Ingleside Terraces since 1963, but grew up with a twin sister in the outer Sunset District during the Depression years.

"...there were a lot of empty lots, but Doelger was building out there. [...] There was (a construction site) kitty-corner from our house and when the men would go home and we'd go over and climb up in there.

[...] Then there was that movie house, the Surf was there. It was called the 'Sunset' then. We used to call it the 'Flea House'. You went there and you came home with fleas. You'd come home with these bites all over you."

Ella also remembers the black-out drills in World War II, Charlie's Market, and having to listen to 1930s radio commentators her grandmother liked such as Bishop Sheen and H.V. Kaltenborn. As an adult, Ella first took lots of art and photography at City College, where most of the experienced teachers were off fighting in World War II, and one of her best friends was relocated because of being Japanese-American:

Ella moved on to UC Berkeley, and eventually became a medical technologist. She and her husband, a public school teacher, moved to Ashton street just before having their daughter. The school busing of the 1960s featured the irony of her daughter being the only white kid bused out of the Ingleside to Robert Louis Stevenson school in the Sunset district. Meanwhile her husband, Francis Driscoll, spent 24 years teaching social studies at Lowell High School until his untimely death in 1974. In the late 1970s the neighborhood faced a growing crime problem:

"[...] it was after my husband died, and I had a break-in when I was asleep, which was horrible. I wasn't hurt or anything, but it was really horrible. Then a number of years later, the drug people from over the hill started to come in here, and this one night there was bullets going all over the street here, and I couldn't believe it. Then I went out the next day and I found all these cartridges in the street and gutter, and I was going to move out at that point, because I was here by myself, my daughter and me, but then I thought, well, you know, stick it out. Then after that, it got better."

Ella feels safe these days, attributing it to the great neighbors she has, how everyone looks out for each other. Of all the changes to have come to Ingleside Terraces, she's most happy with the integration of other races, the families moving in with children, the "new blood".

Photography and art from around the world decorate Ella's house and it's easy to see the creative spirit spirit she possesses: "Well, I always wanted to be an artist when I was kid, but I knew damn well I couldn't make a living at it, so I really couldn't go into it until later in life, but I've been doing it twenty, thirty years." 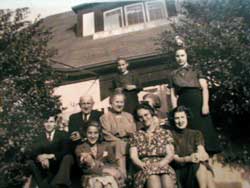