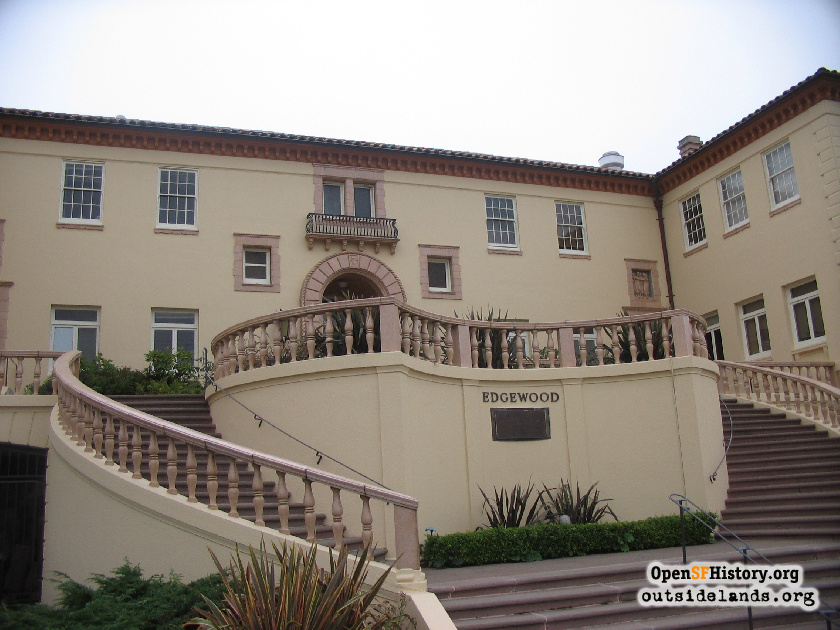 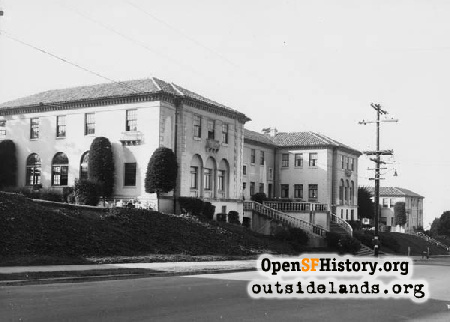 Edgewood, on Vicente Street at 29th Avenue, was formerly an orphanage., circa 1950 -

I live across the street from Edgewood, a complex of stately 1920s buildings set among pine and cypress trees on two full blocks of San Francisco's Parkside District. Visitors always ask me about the place, and not being very fluent in the parlance of social work, I usually say something like "It's the former Protestant orphanage. They still help kids and families."

I also mention that Edgewood is a very good neighbor. The noisy traffic of buses delivering children for day programs and the cars of employees parked on my block are more than compensated for by the curtain of trees and shrubs that surround the site and give me a natural view from my living room window. Every morning while reading the paper I get to watch squirrels leap from branch to branch. Robins, finches, hummingbirds, ravens, wrens and hawks treat Edgewood as a natural extension of Stern Grove and Pine Lake Park down the street.

From my window I can also see children playing on the sports field at the back of Edgewood and hear the adult staff cheering and encouraging them on. Every now and then a ball rolls down their driveway and ends up in our front yard. Also down the driveway kids frequently roll by on bikes, led by a staff member for a ride around the neighborhood. It's great to hear and see children in San Francisco. I grew up on a block of the Richmond District with 30 kids, but the city has become less affordable for families. Outside of the kids at Edgewood, my daughter is the only child on her block.

Even when the Edgewood orphanage moved into the neighborhood in 1924, most of the children it served weren't orphans. Many were dependents of the state, boys and girls whose parents were unable or unwilling to care for them. Others needed a temporary supportive home in a time of family crisis or transition. 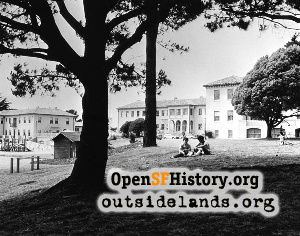 The origins of Edgewood date back to 1851, when several San Francisco women—most wives of Protestant clergymen—formed the San Francisco Orphan Asylum Society to care for five children whose parents had died in an epidemic. A cottage on Folsom Street was lent temporarily to house the children, while funds were raised for a dedicated building at Haight, Buchanan, Herman, and Laguna streets. In March 1854 about thirty children and staff moved into the new facility, the San Francisco Protestant Orphan Asylum (SFPOA).

The organization and operation of the Protestant Orphanage reflected the values of the time. Nineteenth century societal conventions dictated that the female sphere not only handled the raising of children but, because women were considered spiritually purer than men, safeguard the moral values of the community. The SFPOA founders, board of managers, and staff were all women. (The organization's first male board member didn't arrive until 1958.) The mission of the staff and its guiding board was not only to feed, clothe, and shelter the orphanage residents, but also to instill Protestant ethics and morality. The San Francisco Protestant Orphanage Asylum officially accepted only white, Protestant boys and girls between six and twelve years of age. In its early years the institution rejected children of parents believed to lead "immoral" lives, no matter how dire the need.

Despite such restrictions, the SFPOA shepherded over 3,500 children in its first fifty years of existence, and the population in the dormitory-style rooms on Haight Street reached as high as 300 children. In addition to housing youth in need, the organization placed children in adoptions or indentured work and followed up on these placements yearly. Children received training in carpentry and other job skills, and as they aged out of the orphanage at 17, many of the wards were given seed money to embark on a trade such as dressmaking.

The SFPOA survived the great April 18, 1906 earthquake, but the condition of the aging structure and the changing model of care for children inspired a relocation plan a few years later. In the 1920s, the Haight Street campus was sold to the State of California, which had been leasing part of the property for a teacher's college since 1905. Temporarily, the SFPOA rented and relocated to the former Maria Kip orphanage building in the Richmond District. In 1923, the Protestant Orphanage bought ten acres of land along Vicente Street between 28th and 30th Avenue in the Parkside District for a new campus.

Experts in the field of residential care for children had for some time advocated replacing old dormitory-style buildings in favor of campuses of smaller cottages mimicking traditional family life. San Francisco's Pacific Hebrew Orphan Society had built on Ocean Avenue the country's first cottage-style campus for the care of children in 1921. The SFPOA visited and consulted with the staff at Ocean Avenue's Homewood Terrace and hired the architecture firm of Bliss & Faville to create a similar plan, complete with a similar name: Edgewood. 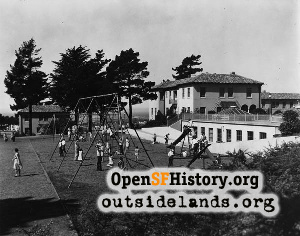 The Edgewood campus consisted of a front administration building with sweeping dual staircases at its entrance on Vicente Street at 29th Avenue. Ranging around and behind were six residential cottages and a laundry. Each cottage, with living room, kitchen, and dining room, housed twenty children, two cottage "mothers," and an assistant. The children attended nearby Parkside School, and often referred to themselves as "P.O. (Protestant Orphanage) kids."

The Great Depression of the 1930s increased the need for SFPOA's services. The organization created a full-time Social Services Department that managed children in-house and through the foster-care system. By 1944, only about six per cent of the Protestant Orphanage children were true orphans, and since many of the children felt stigmatized by the label, the San Francisco Protestant Orphanage officially changed its name to Edgewood.

From the 1950s into the 1980s Edgewood repeatedly reassessed its mission and practices related to societal needs. Restrictions on race and religion were removed. Care became more professional and based on leading research in the maturing field of Social Services. The staff began to reflect the ethnic and community backgrounds of the families served.

Edgewood transitioned into a residential treatment facility for emotionally disturbed children and eventually into a multi-service agency for some of the most at-risk children and families in the Bay Area. The kids who come to Edgewood are trying to overcome abuse, neglect and mental illness, and are given help in the form of behavioral health programs, family support, and educational services.

This year marks the 160th anniversary of the organization that is now Edgewood Center for Children and Families. As part of the commemoration, a new garden learning center is being created on the east side of the campus. April 30, 2011 will be a day of volunteerism as local contractors and experts, brought together with the help of the organization Rebuilding Together San Francisco, will make a place for children to grow food seasonally, learn about sustainable practices and nutrition, and just spend time outside getting their hands dirty.

Since Edgewood has been such a good neighbor to me these many years, I feel I should do something neighborly in return. Contributing to the new garden center seems like a nice place to start. Join me in helping out. Read about the project at edgewood.org/garden.html. Learn about volunteer opportunities by emailing to volunteer@edgewood.org and investigate donating cash (including naming opportunities) by contacting Kristine Leja at 415-682-3120 or KristineL@edgewood.org.