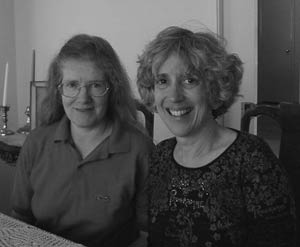 Good friends Chris Tweedie and Elaine Ellsworth were gracious enough to provide us with an interview reflecting the perspectives of relative newcomers to the OMI. Having come to the neighborhood just three and four years ago, both women said affordability and great views brought them to Merced Heights. But their welcome to the neighborhood was quite divergent:

Chris: "I had a very good experience. My next-door neighbor, Rose Snell, welcomed us with opened arms, and the people we bought from were very, very cordial and, you know, so everything was very nice."

Elaine: "Well, the first day that we owned the house, the day that escrow closed, we went over to take a look, and the windows had all been shot out by a B.B. gun."

Contributing to her rough introduction to the OMI, Elaine's dog was injured by a neighbor's pit bull and mysterious (likely poisoned) pork chops started showing up on her doorstep! "And then the car was keyed. And then--I don't know. There were things like that going on. But I tell you that because there is that negative side, that we felt quite a hostile environment. We were frightened, put an alarm in and everything. But the upside is that the lady across the--we got to know the neighbors, and we love it. We loved it. [...] My neighbor across the street is an elderly Japanese woman, and every time she would see myself or Wolfie [the dog] and I both, she always had presents for us, every time. She always supplied Wolfie with his treats and toys, and she's a wonderful lady."

Things changed as Elaine settled in and met more of her neighbors, from the family of a local professional football player, to the well-known Christian jazz singer, to the older German couple who had lived in Merced Heights for over forty years: "Middle-aged, white, gay couple. Two or three older black families. Young yuppie black families inviting me to their barbecues. The backyard neighbor was from the Philippines. Just great, you know. [...] I thought was so San Francisco. I just loved it. It's everything I wanted out of living in a San Francisco neighborhood."

Together, Chris and Elaine can rattle off dozens of neighbors who contribute to the OMI community:

Chris: "Juanita, across the street from me on Sargent, knows everybody and has been there in the house for, you know, a zillion years. [..] She travels a lot and is an educated woman..."

Elaine: "Another family that we know was--and they were real important to us--another gay couple, a middle-aged gay couple. He's an immigrant from Belgium and--one of the gentlemen is--and the other gentleman was an African American model. And the guy from Belgium is a manager of a huge direct mail business, and they're actually the godfathers to our dog. [Laughter] And they've been really wonderful. They love the neighborhood."

Chris: "Rose [Snell] can be counted on to help with the garden and things like that."

Elaine: "Then there's the Tannenbaums. [...] he's a computer animation consultant, and she is an educator in the Jewish faith, and they are wonderful. They had us over for a formal tea. And he studies Italian.."

Elaine: "Peter is the god of the neighborhood. [Laughter] I mean, he just--he's amazing."

Elaine and Chris met taking Tai Chi from Oliver Chu at Brooks Park. Together they helped start a tree-planting in the neighborhood through Friends of the Urban Forest. Chris really took off with the effort, canvassing the community to help, and really felt the goodwill of the neighborhood when she had a stroke while distributing leaflets on Shields Street. Lying unconscious, she was found by neighbors who got her an ambulance and to the hospital. Elaine remembers how "they were so nice and caring. We went back and saw them later and everything. And that was actually another positive, you know, that they were really helpful and caring."

After her rocky start in the OMI, Elaine can't talk enough about her positive feelings for the neighborhood now: "I was just amazed at how I felt like part of a family and so protected and loved by the immediate neighbors. It was just really nice."