Minor-league baseball in the fog

(Originally published in the Haight Ashbury Newspaper, December 1982. For a detailed look at the origins and facts around the well-known myths of Ewing Field, read Angus Macfarlane's article.)

Once upon a time there was a beloved baseball team called the San Francisco Seals. For over half a century, the Seals belted drives and chased flies at funky Recreation Park at 15th and Valencia; and from 1931-1957 they played at Seals Stadium at 16th and Bryant, but for one strange season in 1914, pro baseball was played west of Masonic Avenue and across the street from Calvary Cemetery at Ewing Field.

J. Cal Ewing, owner of the Seals, and one of the organizers of the PCL, was fed up with sharing the lease at Recreation Field with the owner of the Oakland "Commuters." The fans were disgusted about Rec Park's short fences, overcrowded stands and congested entrances. So J. Cal coughed-up $100,000 (70 million bucks for a ball park today) and built the most modern minor league park in the country." Mr. Ewing modestly named the new stadium after himself.

On opening day, May 16, 1914, a brunch was served for dignitaries and boosters at the Palace Hotel then a motorcade parade up Geary to Ewing Field, 18,000 fans listened to patriotic music and the usual array of speeches by Mayor Rolph and other VIPs. An iron chest containing names and photos of the players and other baseball memorabilia was buried three feet below home plate. As the time capsule was being lowered the floral horseshoe inscribed with the words "Good Luck" was blown over by the winds. To the superstitious this was a bad omen.

The Seals played a lousy game and lost to Oakland, the worst team in the league, 3-0. The Chronicle placed much of the blame on the weather:

"Perhaps it was the cold wind that whistled around Lone Mountain on to the green of the ball field that made the spectators shiver and long drives which would be homers at Rec Park inconsequential."

Though the Seals got off to a slow start, they came "roaring back" with rugged ballplayers like: "Howling Harry" Hughes - who rarely said a word; "Nig" Clarke - 1907 American League batting champ nicknamed for his dark complexion; "Del" Howard - the Seals' 35-year-old manager and the team's best hitter; "Spider" Baum; "Goat" Colligan; and "Wild Bill" Tazer.

As the season wore on - the fog rolled in... nearly every game. A game was actually cancelled due to fog on June 6. The fans stopped coming to games, not only because of the climate, but most of the Seals supporters lived in the Mission - miles from Ewing Field. Freeloaders, who didn't want to pay the price of admission, watched the games from the top of Lone Mountain.

The players couldn't deal with the fog either: Elmer Zachar, an outfielder for Oakland, was so confused by the fog that the mascot for the "Oaks" was sent from the bench to inform Elmer that the side had been retired. Pete Daly built a fire in the outfield to emphasize the need to stay warm. 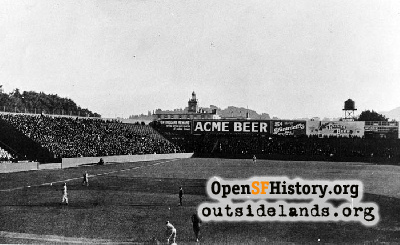 South view to left field at Ewing Field in 1914. Buena Vista Park and cupola of the convent of the Sister of Presentation at Turk Street beyond. -

The Seals were in the pennant chase until the final week of the season. They won 115 and lost 96. That's 211 games! On the final day of the season, Skeeter Fanning of San Francisco pitched a no-hitter against the first place Portland team. That was the last game the Seals would play at Ewing Field.

In the off season Mr. Ewing sold the Seals to the Berry Brothers, owners of the L.A. Angels. The new bosses immediately stated that because of the weather conditions, they would never play at Ewing Field. A few months later, through negotiation and big money, the Berrys' achieved what J. Cal Ewing could not - ownership of Recreation Park. In 1915, the Seals returned to Rec Park and brand new Ewing Field was abandoned.

On September 29, 1916, Ewing Field was to play host to "Aida." the opera by Verdi. 20,000 tickets were sold but the weather struck again. A freak rainstorm washed out the extravaganza and the performance was moved to the Civic Auditorium.

In 1923 Ewing Field was transformed into a football stadium. The grandstand was enlarged to handle 26,000 gridiron fans. A sold-out crowd watched Santa Clara and St. Mary's play the first football game at Ewing. The weather couldn't postpone a football game.

In 1925 a huge throng of spectators turned out for the first Shriners Football Game for Crippled Children.

Boxing promoters leased Ewing Field to stage championship fights. It appeared that Ewing Field had a bright future, but on June 5, 1926 disaster struck.

While an amateur baseball game was being played, someone tossed a lighted cigarette under Ewing's grandstand. The wooden stands caught on fire and quickly became a raging inferno. A forty-mph wind blew flaming embers onto the roofs of Victorian rowhouses in the Western Addition as far away as Fillmore. Within thirty minutes, over 21 alarms were called in. Fireman responded quickly but over a hundred fires were burning at one time. A troop of boy scouts successfully controlled a tree and brush fire across the street from Ewing Field at Calvary Cemetery. Only seven persons were injured, but forty buildings were damaged and many families were homeless. Chief Murphy of the Fire Department said, "Not since 1906 has San Francisco been in such danger of being wiped out." Ewing Field's stands were a charred ruin.

From 1926-1938 Ewing Field, except for an occassional appearance of neighborhood kids, stood vacant.1 To motorists, pleasure driving down Masonic or Geary, the site of Ewing Field prompted chuckles or the words "white elephant."

In 1938, the Catholic Church, which had always owned the land, sold Ewing Field for $150,000. In November 1938, the old ballpark was demolished to make way for 95 homes selling for for $7,500-$8,000. Heymann Homes claimed the subdivision would offer "an attractive pillared gateway entrance with gardened terraces similar to Presidio Terrace."

To see these "magnificent" homes and the site of the old Ewing Field, go past Turk on Masonic, north of the old Lincoln University and former convent, and find Ewing Street. Somewhere underneath the house near Anza, probably still buried, is the historic Ewing Field time capsule. Bring a pick and shove, Kindly ask the property owner if you can have access to their basements.

When you think Candlestick Park is a joke, remember Ewing Field.