The Adventure of the Fake Rocks

One boy's 1940s adventure on the cliffs of Sutro Heights.

The Adventure of the Fake Rocks 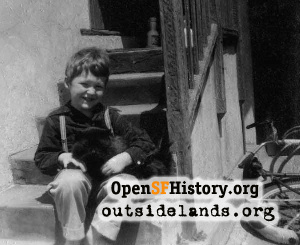 There were two tribes of children out where I lived on 47th Avenue in San Francisco, where the ocean loomed gray and green beyond the vacant lots: the big kids and the little kids. I was a little kid. Big kids got to go on adventures in the wild sand dunes above the Pacific ocean, and even beyond into mysterious Sutro Park, a Victorian estate that once had belonged to the richest man in the world. But then he died and gave it to the city to be maintained in his honor forever and ever.

They got to chase each other around the promontory where Sutro's mansion had stood before it burned down long ago. They could look over the ramparts and see sea lions snoozing on Seal Rocks and big 1948 cars racketing up and down in front of the Cliff House whenever the wanted to. If they looked south, they could see Playland, the great amusement park with its roller coaster and Shoot-the-Chutes and merry-go-round and miniature sailboats where little kids like me tinkled a bell while going round and round in a circle.

Little kids weren't allowed to have adventures like that. We had to ride our tricycles in front of our houses and sometimes wave to each other from far away. Sometimes, my mother pushed me to the duckpond in my Taylor Tot. Once I saw some black high-button shoes hobble by, the kind witches wear except not so pointy. We were passing that beauty parlor at the corner of 47th and Cabrillo, and the old lady witch stopped to talk to my mother. I examined dog pee spots on the black tile below the beauty shop window. That's the kind of stuff little kids got to do.

But I was still pretty brave. For instance, I wasn't a bit afraid of those ducks at the duckpond. I just laughed when they rushed me to get the stale bread. I fed every one until the paper bag was empty. Then I threw the bag at them too, and Momma made me pick it up. Then she pushed me home again under the foggy sky.

Once, when I was six, my brother Noel issued me a special pass to travel with the big kids for a day. I'm not sure why. Probably my mother told him he had to.

Noel and Jay Jay were going on a scouting party to explore the fake rocks on the cliffs above the Cliff House. I wouldn't have to worry about marauding war parties from other neighborhoods, which was the main reason why we little kids never went into Sutro Park by ourselves. Those kids were even meaner than my brother and might beat you up. Noel just practiced Indian burns on me and showed me great wrestling holds with me as the model.

We took the trail to Sutro Park that winds through the ice-plant covered sand dunes. When we got to where the trees begin, we stopped to climb on that cypress with the low-hanging branch you could ride like a horse. Then Jay Jay tried to push Noel off and Noel got mad and they started rolling around in the cypress tree needles while I climbed up on the branch to bounce until they were done fighting. Then we crossed the meadow where Mom and her friends held Easter egg hunts. The grass was always bright green there like Easter was. I wondered if there might still be some jellybeans hidden in the sourgrass. Then we scrambled up the ivy-covered hill and over a chain-link fence into the old estate where Victorian moms in bustles once pushed their perambulators on bright Sunday afternoons like this one.

In those days, Sutro Park still held remnants of its Victorian splendor. This was before the dark time when gangs of vicious young men roamed the park at night, breaking arms from marble Greek maidens and smashing their heads in the darkness for love of cruelty.

We stopped to admire the brave goddess Diana on her way to hunt the lions that guarded the entrance to the park. You could see she didn't wear a shirt when she went on adventures. I liked that, because I always took my shirt off too, if it wasn't too cold, so I would look more like Tarzan.

We crossed the grove of monkey puzzle trees, then passed the wishing well house, splattered with interesting graffiti. We could have spent hours in there advancing our education, but we were on a mission. We had to reach the Fake Rocks.

We passed bee-hives so electric I put my tee shirt back on just in case. We skirted the steps to the Lookout where you could see, on a bright day like this, all the way to the Farallon Islands. Then we hopped another chain-link fence and edged out onto the cliff that descended to the street far below. The fence, by the way, was there to keep stupid kids from rolling to their death in the traffic below. 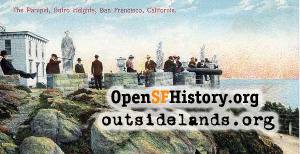 Someone in the time of the Ancient Ones had carved stone steps into the cliff. They wound down down fetchingly, we didn't know how far. We thought they might go all the way to the Cliff House, but they might just end in the middle somewhere.

Traffic noise drifted up to us. We could see teenagers in saddle shoes on Sunday dates walking up and down the sidewalk eating Pronto Pups from the stand next to Sutro Baths, and tourists going in and out of the Cliff House. In its gift shop, baby turtles, suffocating from the painted tropical nights and palm trees on their shells, crawled over each other in measured desperation while we, far away in the bright sky, edged down stone steps, and I was bold and unafraid, with my shirt tied around my waist like Tarzan.

We saw them halfway down across the cliff face—giant outcroppings from some handmade cataclysm of yore, brown and pointed like that witch's teeth—the fake rocks! No one knew why they were there, we only knew they weren't real rocks. There weren't any real rocks around here—in the ancient times, this hill hadn't even been a cliff, but sand dunes, with poppies and clumps of coyote bush sticking out. Now there were fake rocks and fake gravel and broken arms of fake Greek maidens strewn like rubble, like the K-rations we found washed up on the beach from ships of war. Maybe Mr. Sutro built them just for the fun of it.

We scrambled across the side of the crumbling cliff. I wasn't worried with Noel and Jay Jay ahead of me. They were big kids and knew what to do, even if they were stupid. I watched the cars crawling along below with a patronizing smile. No bigger than ducks. I tied my shirt around my neck so it dropped down my back. Superman!

As we came closer, we could see there was a hole in one of the rocks where you could climb inside. We crawled through the small opening like the cowboy explorers who discovered Carlsbad Caverns, not knowing what they would find besides darkness and bats.

A dim light suffused the scene. We could see it was built by the Ancient Ones out of chicken wire nailed over a wooden frame and spread with something like paper maché. Sea gulls and pigeons had found the opening a century or two ago and the whole interior was coated with their feathers and white bird poop. We could stand up inside it. Noel and Jay Jay started looking around to see what they could find. A pigeon eyed me suspiciously as it sidestepped along the upper frame. 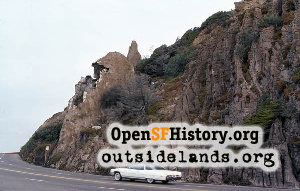 Eroding fake rocks on the cliff face of Sutro Heights, across from the Cliff House, early 1970s - Photograph by Dennis O'Rorke.

It smelled in here.

Pretty soon Noel said, "Jay Jay, look at this." He'd found a beer bottle behind the board of the lower frame. He held it up like it was something special. It didn't look special to me but Noel and Jay Jay were interested and took it outside to see better. I climbed out to see too. It was the label. None of us had ever seen a label like that before, although we knew a lot about empty beer bottles and cans from playing in vacant lots. This one showed a billy goat looking at you with a serious expression, like he wanted to make sure you didn't drink too much. Beer could make you drunk and then you got hiccups and acted crazy and shouted "Happy New Year!" even if it was the Fourth of July.

The label read Regal Amber Bock Beer. The Perfect Beer. Gosh! One of the Ancient Ones must have snuck in here to drink it. Someone from the time of long ago, before I was born maybe. Why did he go in there in the pigeon poo to drink his beer when he could have sat on the cliffside and watched sea lions diving off Seal Rocks?

I hunkered down and gazed at the blue-green ocean sprinkled with whitecaps out to the horizon. Noel and Jay Jay were squabbling over what to do with their stupid billy goat beer bottle. Who cared? I was far away from the duckpond and my tricycle in the driveway. I was adventuring with no shirt on in a corner of San Francisco that nobody knew about except me and Noel and Jay Jay. What else was out here in the world? I wanted to see it all. From beyond the horizon a voice whispered to me. She sounded like wind and sea lions. "I'm beautiful, come and see!" she said.

We dawdled back toward the crumbling stone steps. Noel and Jay Jay were looking for stuff people might have dropped off the clifftop. Like a wallet, maybe. Finally, we climbed the stairs and scrambled over the chain-link fence into the ordinary world. But I was changed. I knew what I had to do. I was going to follow that voice. My life would henceforth be devoted forever to adventure.

But that Fall I caught strep throat and came down with rheumatic fever and had to stay in bed for two years.