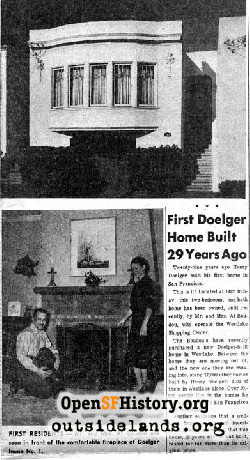 Doelger Brothers built over 17,000 houses in the Sunset and Richmond Districts and all over Westlake in Daly City. But it looks like we've found their first. A San Francisco News article from October 6, 1954 identified the original "Doelger" as 1427 - 36th Avenue, apparently disproving speculation a few years ago (including in the New York Times) that the first Doelger-built home was 1419 - 39th Avenue.

But wait a minute! There's no house at 1427 - 36th Avenue, which is the green open-space side of the block along Sunset Boulevard.

Further research showed the newspaper blew the address. According to city directories, Mr. and Mrs. Al Boudou lived at 1427 - 39th Avenue in 1954.

So we're back to 39th Avenue, just a few doors up the street from where we thought. Rob Keil, who was tipped to the News article by Henry Doelger's son, confirmed that the photo matches the new address.