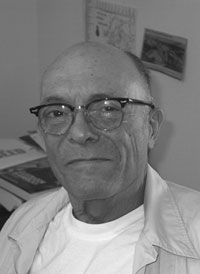 When we went to interview Bob Fisher in the house he's lived in for 74 years, he insisted we take a drive around the neighborhood first. A career public school teacher, Mr. Fisher can't pass up an educational opportunity and he wanted to make sure we saw each home he prepared to mention in the interview.

Mr. Fisher's parents built the house on 11th Avenue between Lawton and Moraga in 1927 so that their newborn son would have a backyard to play in. The home was just the eleventh built on the block at the time, and Bob vividly remembers the open space that surrounded the few buildings dotting Sunset Heights, and of playing Cowboys and Indians over blocks and blocks of sand separated by crushed red rock paths.

He showed us the few homes that sat up on the hills of Sunset and Golden Gate Heights when he was a boy. 559 Ortega Street, owned by the Ericksons in the early 1930s, looks like an Austrian cottage pulled out of a forest. The brown shingled roofline of 1926 11th Avenue peeks just above the sidewalk, built before the grading and roadway came in.

We stop the car to look west over the Sunset district's carpet of homes, with Lincoln High School in the center like a birthday cake. "On the other side of Lincoln it was sand dunes, and that went all the way out to 43rd Avenue." Bob attended Lincoln when it was a brand new high school with one main building and some temporary sheds to the south, graduating in the Fall of 1944.

We drove by Golden Gate Heights Park. "They had, as they do now, the tennis court up here, just isolated up here. No trees around it. It was really rather interesting." 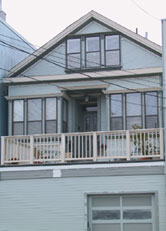 Back on 11th Avenue, Bob shows a hand-drawn map of just the homes that existed on his block when he was a child, going through the number of kids in each of the eleven houses. "We played 'one-foot-off-the-gutter' outside and all that, and at 5:00, when the bells would ring down at St. Anne's the game stopped and we all ran inside for dinner. So we had a regular system there."

"My father was a letter carrier," Bob says, "and my mother created evening gowns for opera nights and the like. They played bridge three nights a week with people and we had three card tables sometimes. Whoever was here stayed for dinner. We always had formal dinners. My father wore a smoking jacket." He showed us a photo of the man in a formal tuxedo. When Bob turned 21 he at first resisted his mother's offer to buy him a tuxedo, because he thought the idea old-fashioned. "My mother said 'Every gentleman owns his own tuxedo, I'll meet you at Roos Brothers on Friday at 1:30,'" he laughs.

Formal dress and the old 6 streetcar line that went up 9th Avenue to Pacheco brings back another memory. In the 1930s, Bob and his mother set off for a trip downtown on the 6 car to see Santa Claus. When the streetcar got to about Van Ness Avenue his mother said they had to return home. They did so, and by the time they reboarded the 6 in the Sunset it was the same conductor they had originally met, who was quite perplexed to see them again. "'Mrs. Fisher, I thought we had taken you down!' She whispered back, 'I forgot my gloves!'" Bob laughed and recounted how trips downtown meant all men wore hats, coats, and ties and women wore hats, coats, and gloves, whatever the weather.

He remembers when just about every block in the neighborhood had a small grocery store: 10th and Lawton (where "A Children's Place" preschool is today), 12th and Kirkham (today a restaurant), Noriega between 8th and 9th, 9th between Noriega and Ortega, and in the bottom on the Masonic Temple building at 9th and Judah was a Safeway.

Bob decided to become a teacher based on his wonderful experiences as a student at Columbus Grammar School (now Alice Fong Yu Elementary School). His future profession was predicted by his third grade teacher, and when he did become an educator as a young man, Bob recalled that the principal (Miss Shuck) cried that he didn't pick Columbus. "I said 'How would I know if I could teach if I came here with all of you people here?'"

Alice Fong Yu's newer addition on the south side of the school was the site of more Columbus memories: "On the Funston Avenue side, right above the playground was dirt, sand, and we used to play football there, touch football. They wouldn't let us play tackle on school days. We did it everyday at lunchtime. As a result, Columbus School had an extra bell. Five minutes before one o'clock, a bell would ring and that meant we had to leave there, go outside where the 6th grade teacher, Mrs. Elkins (who was really mean and strict) would look out the window to be sure we were emptying the dirt out of our shoes! We had a great time."

Mr. Fisher joined Boy Scout Troop 95 at Columbus when he was a boy and as an adult acted as scoutmaster for the same troop. He's attended recent class reunions, and contends that his initials etched in the entryway in the 1930s, are still visible. Despite never teaching there, Bob Fisher never really left Columbus: "It's a part of me."