Although Sutro planted trees over most of Rancho San Miguel, he leased the level areas to farmers. 33 The sandy soil was ideal for vegetables, particularly potatoes which are called remarkable as early as 1855. 34 One group of farmers worked near the Alms House well before Sutro arrived on the scene. 35

Vegetables were big business in early San Francisco. As early as the 1860s, produce farming was the most profitable business in northern California. 36 Although meat was plentiful, fruits and vegetables were scare and expensive. Many of the first Italian immigrants, who came from farm country around Genoa, realized that they were not going strike it rich in the gold fields. But they saw an opportunity to provide the boomtown with produce. They usually rented and farmed sandy soils in what were then outlying areas, such as Mission Valley, Noe Valley, Hayes Valley, Ocean Avenue, Bayview, Lake Merced, Visitation Valley, and Rancho San Miguel. 37 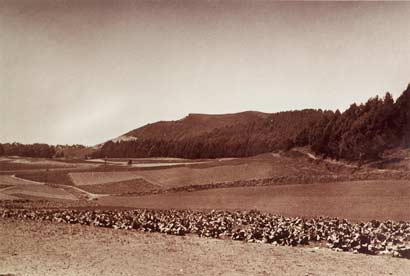 Vegetable farms in West Portal about 1900. Taken from Ocean Avenue and Junipero Serra Blvd looking north. Golden Gate Heights is the hill on the left. The dirt road on the right is the San Miguel Road, now Portola Drive. St. Francis Wood was built among the trees to the right of the road. (Greg Gaar collection)

The tightly knit community of Italians rented most of Sutro's land, bounded by today's Portola, Kensington, Taraval and Wawona streets. Four families farmed the land for decades spanning two centuries: Arata, Bottini, DeMartini, and Lagomarsino. 38 Early each morning, they loaded their wagons with produce and made the 3-4 hour one-way trip downtown to the Colombo Market---San Francisco's produce exchange---on Davis Street.

Sutro's tenant farmers were members of the Colombo Market, the "greatest vegetable market in the world." 39 Established in 1876 at Davis and Front Streets between Clark (no longer in existence) and Pacific, it thrived for nearly 100 years and launched the careers of men who built northern California's agriculture (e.g., Del Monte), wine industry (e.g., Italian Swiss Colony) and banking (A. P. Giannini lent money to Italian farmers and went on to create the Bank of America). 40 They also introduced many herbs and vegetables to California and the nation.

Wollenberg says, "The whole area, from where West Portal is today to State College, was vegetable farms run by the Lagomarsino family. Louis Lagomarsino used to supply most of the vegetables to the Relief Home [Laguna Honda Hospital]. He would come every day with a horse-drawn wagon loaded with vegetables. The Lagomarsino family lived in the Mission, came out every day to work their farm." 41

The quote above refers to the period around 1910 when the older and more established members of the Lagomarsino family lived in homes elsewhere in the City. However, members of the family lived on or near the farm in earlier times: Louis in 1887, Francesco in 1889, Giuseppe in 1894. 42

By the turn of the 20th century, farming in San Francisco was becoming less attractive. Water for irrigation was a problem, and the newer generation preferred to work for wages and live in houses with indoor plumbing, electricity, and other modern conveniences. 43 As San Francisco's population grew, reaching 343,000 in 1900, demand for home sites grew and intensified after the 1906 earthquake and fire.

A neighbor of Sutro's Italian tenants, Merlo, made what might have been an unhappy transition from farmer to hired hand for developers. For decades Merlo and his family farmed south of Sutro's property, about where St. Francis Circle is today. Giuseppe Merlo had a stall in Colombo Market in 1887 and he and his family worked the farm until 1915 when the land was sold for development. They found work felling trees for the building of Forest Hill. 44

Home sites were definitely on the minds of Sutro's heirs after he died in 1898. His estate was valued at $3 million but only $473.50 was in cash. The Argonaut newspaper notes the "most striking feature is the small amount of income-bearing property." 45

Most of the heirs wanted to sell the property. But under the terms of Sutro's will (created without a lawyer), Rancho San Miguel could not be sold until 10 years after the death of the last heir, at which point the proceeds would be used to fund a trust for charitable purposes. Seeing that they would get nothing, the heirs sued to break this provision. The battle took 20 years to fully resolve. 46

Emma Sutro Merritt, Sutro's favorite child and executor of the estate, remained faithful to her father's wishes. Besides the differences of opinion, bad blood developed between Emma and her siblings due to an ugly fight shortly before Sutro's death. Sutro was made Emma's legal ward a few months before he died. She took him to live with her on Van Ness Avenue against the wishes of her sister and brother who thought he would be happier in his Point Lobos home. Emma, one of the first women doctors to graduate from the Affiliated Colleges (today's UCSF), claimed Sutro would be better off away from the damp ocean air. The siblings tried forcibly to prevent the move. Since Sutro was a former mayor and benefactor of the City, the newspapers made much of this incident. 47

While Emma won that battle, she ultimately lost the probate fight. While the lawyers argued for 10 years, Emma struggled to maintain the estate with inadequate cash flow. Although the Sutro Baths was the largest drain, the rancho also lost money. Some of rancho tenants were delinquent in their rent payments. Emma wrote to the Court of her difficulties:

"In the latter part of 1900 we began to have difficulty collecting Mrs. Burfiend's rent. Her husband had been a tenant for many years and died on October 27, 1897 but Mrs. Burfiend continues to occupy the place. In March 1901, she was behind six months in her rent $171 at $28.50 a month. In April 1901, she claimed that all the houses on the land belonged to her. In October we were informed that she was trying to sell the house she occupied."

Emma filed suit and won a judgment, whereby Mrs. Burfiend would give up any claim to the land or houses but would be allowed to rent "for the remainder of her life and pendency of the estate for $12.50 month." 48

While another tenant wasn't trying to sell the property, he wasn't paying top dollar either:

"The note of tenant Lynch for $126 for 18 months rent at $7/mo has never been collected. We have always considered it worthless, as Mr. Lynch is old and feeble. We reduced his rent for the 1st of March 1901 from $5 to 2.50. Lynch was unable to pay $5 and we though it better to have him occupy the place as if it were vacant, some tramp might set fire to it and the adjoining forest." 49

The City was also a threat to the estate's finances as Emma reported to the court in the third person:

"She (Emma) was put to much expense in constantly watching and preventing encroachment upon said property and particularly by preventing unnecessary contracts for grading, macadamizing or sewering some of said property being pursued by the Board of Supervisors [at this time, property owners paid for the cost of improvements]. Small portions were rented and she found it extremely difficult to collect any rent on account of the depressed condition of business affairs and had to accept less rent." 50

Finally, in 1909, a major court decision allowed the sale of most of Rancho San Miguel. The court held that the type of trust Sutro had in mind was illegal, and although final distributions of his estate were not made until 1919, the rancho could finally be sold to developers.

35. Herman Burfiend, age 25, opened a potato ranch opposite the Alms House in 1860, and his family lived there for the next 50 years. Burfiend added a dairy in 1888 and sold milk to the Alms House. His sons George, Henry, and Dietrich worked on the farm and dairy while his daughter Annie worked as a cook at the Alms House in 1895. The Alms House furnished the dairy with water at $15 a month and, in turn, received payment in milk. Kortum ibid, pp. 25; various City Directories; Municipal Reports, 1894-1895, pg 787.

Other farmers were the Jennings brothers, Patrick and Peter, who "had a place on the hill, on the Sutro property." They first appeared in City Directories in 1870 as farmers living 1/2 mile from the Alms House. Ranching must have grown too hard as they aged. In 1892, at age 55, Peter was hired by Sutro to plant trees at $1.75/day. Kortum, ibid, pp 25.
"Pay Roll of the San Miguel Ranch, Tree Planting, March 4, 1892," Sutro Library. Misc, folders.

40. Gumina, pp. 101-107. The Market moved after the 1906 earthquake and fire to Washington and Front Streets between Davis and Drumm. By the 1950s the produce market and related businesses covered 51 acres of prime real estate. It befell the same fate as the Paris marketplace, les Halles, about the same time and for the same reason, they were thought to be bottlenecks to traffic. The San Francisco Produce market was razed in early 1960s to build the Redevelopment Agency's Golden Gateway Project. A new produce exchange was built near Islais Creek in 1963. Peter Booth Wiley, National Trust Guide San Francisco, John Wiley and Sons, 2000, pp 84.

43. The author's ancestors were members of the Colombo Market and they owned a vegetable farm in Visitation Valley from 1883-1929. The author's cousin, Ed Armanino, who was born on the ranch in 1910, related to the author in 1997 the difficulties of ranch life and how his uncles regretted returning to the ranch after serving in World War One.

Merlo's ranch was next to a creek that cut a ravine along present day Wawona, behind the Ardenwood Christian Science into Sigmund Stern Grove and ending in Pine Lake. (Sanborn map 1913) This ravine was filled in with 250,000 cubic yards from excavating the Twin Peaks tunnel in 1914-1917. Sinkholes occasionally appear on Wawona according to a neighbor on the 200 block of Wawona, to the author September 2002.