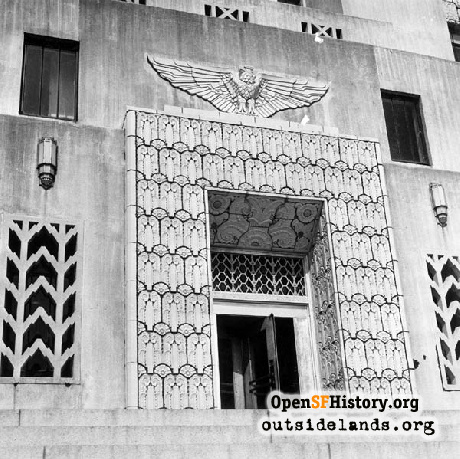 On April 6, 1931, California veterans' advocate John J. Hayes, state commander of the Disabled Veterans of the World War, publicly pressured Frank T. Hines, the head of the newly formed Veterans Administration, to place California on the "priority schedule" of states that would receive new medical facilities. Hayes argued that of the more than twenty million dollars budgeted for new construction, virtually all of it was earmarked for facilities in the East and the Midwest. According to Hayes, California was more deserving than other states because as a growing state with more than a quarter of all veterans, it had only one major veterans hospital: the aging Sawtelle Veterans Hospital in Los Angeles. The following day Hines denied that California had been omitted from the priority list. In a telegram he sent to Hayes, Hines maintained that the Veterans Administration was actually awaiting a decision from the city in regard to a suitable site. That same day, Mayor Angelo Rossi appointed a site selection committee of thirty-two prominent individuals. On April 8, 1931 the committee announced that work was underway and that they would have a site selected within the next two weeks.

In 1932 the U.S. Army deeded twenty-five acres in the center of Fort Miley to the Veterans Administration. Within a year an additional four-and-a-quarter acres were added to the parcel. By November 1932 the VA Department of Construction Services drew up plans for the new San Francisco VA Medical Center An article in the November 6, 1932 edition of the San Francisco Chronicle announced that construction of the facility would begin in January 1933. The new $1.5 million public works project was to be paid in part by President Hoover's Finance Corporation. The article included a rendering of the proposed complex as well as a detailed description of it:

The group will crown the Fort Miley Hill at Forty-second Avenue and Clement Street. In the center, facing the south, will stand a monolithic seven-story building with a tower, with two horseshoe wings; at the east the Veterans' Bureau building; at the west a unit to be constructed later. Radiating from the main building will be a two-story recreation building to house a film theater and library, quarters for officers and attendants east of the Affairs center, with a huge mess hall, ward building, warehouse, garage, heating plant and X-ray building—a total of fourteen separate structures.

The article described how the new Medical Center would accommodate 404 men and employ 200 administrative staff. The San Francisco VA Medical Center would collaborate with the nearby University of California Medical School and "draw patients from all of the Western States."

The construction of the San Francisco VA Medical Center took almost two years to complete. First the site had to be cleared. In February 1933 the U.S. Army began demolishing the twenty-odd barracks and related buildings at Fort Miley. Excavation and foundation work began in March of that same year. Construction of the buildings continued throughout the rest of 1933 and the first three-quarters of 1934. The construction bid went to the Los Angeles-based Herbert M. Baruch Corporation. Construction alone was to cost $898,000 in addition to $235,000 for plumbing, $30,000 for elevators and $19,000 for electrical work. By the autumn of 1934 the San Francisco VA Medical Center was largely completed and began accepting patients.

The completion of the VA Medical Center was commemorated in a full-length article by Homer M. Hadley in the January 1935 edition of The Architect & Engineer. According to Hadley the San Francisco VA Medical Center was "one of the first government projects to be designed with studied consideration of earthquake hazard and prevention of earthquake damage." As an early example of its type, the earthquake resistant nature of the VA Medical Center's design deserves further discussion. According to Hadley, the buildings were designed to withstand earthquakes of a magnitude "1-10 G." By the early 1930s engineers had already determined that buildings that move as a single unit are much less likely to collapse in the event of an earthquake. The buildings of the VA Medical Center were designed with major concrete "bracing walls" (shear walls) interspersed throughout the interior. Furthermore, the exterior terra cotta detailing was attached to the underlying concrete by ties attached to vertical pencil rods and the intervening space slushed solid with mortar. 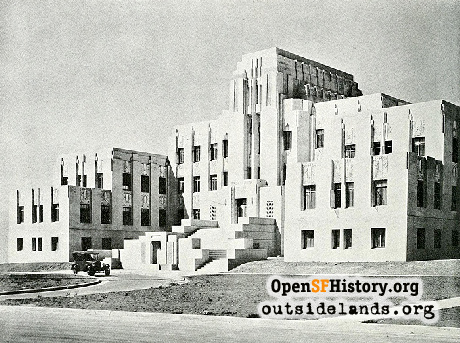 The "Mayan Deco" design is evident in the admininstration bulding at Ft. Miley, 1934 - The Architect and Engineer, January 1935

Although the floor plans of the new buildings at the San Francisco VA Medical Center were based on standardized plans, the "Mayan Deco" style chosen for the exterior was unique to the San Francisco campus. The style was quite popular in California during the early 1930s, particularly in Los Angeles. In the article in The Architect & Engineer, Hadley complemented the design of the buildings "not as an architectural splurge" but rather as "clean-cut, efficient and intent upon its business." According to Hadley the dominant impression of the VA Medical Center was its appearance of permanence, strength, cleanliness and efficiency.

The official dedication of the San Francisco VA Medical Center took place in early 1935 and for six years the history of the institution was relatively uneventful. In order to save money the U.S. Army decided in 1937 to deactivate the batteries next door at Fort Miley. However, the Japanese attack on Pearl Harbor on December 7, 1941 compelled the Army to reactivate Fort Miley. The batteries were put back into service and anti-aircraft guns added. Due to the proximity of the batteries to the San Francisco VA Medical Center the patients were evacuated for the duration of the War. In 1943 Fort Miley was permanently deactivated and in 1946 the patients were returned to the VA Medical Center.

Despite the dramatic increase in the number of veterans following the Second World War the San Francisco VA Medical Center underwent comparatively few physical changes for almost two decades. In 1963 the San Francisco VA Medical Center was awarded a large grant in order to pay for a three-phase modernization program. The first phase consisted of the construction of Building 200, a new clinic and administration building. According to contemporary newspaper articles, Building 200 cost $4.5 million dollars to build and was to serve as the new home for clinical and anatomical laboratories and the radiology department. The construction of Building 200 severely impacted the integrity of the formerly park-like environment of the grounds, resulting in the destruction of the formally landscaped lawn as well as the removal of Building 2's original entrance. In 1967, Building 12 was substantially enlarged and converted into a research center. The second phase did not begin until 1973 when a new power plant (Building 205), reservoir and pumping station (Buildings 29 and 30) and a new 440-bed hospital building (Building 203) were constructed. This colossal hospital building, designed by William Pereira, has remained the centerpiece of the Medical Center's operations ever since.

The third phase began in 1989 and was largely completed by the mid-1990s. This phase began in 1989 with the construction of a four-level parking structure (Building 209). This structure was constructed to help alleviate the tight parking situation arising from the growing number of hospital staff and declining usage of public transportation. In 1990, the seismic upgrade of Buildings 200, 2, and 4 began, and in 1992 the long-awaited nursing home (Building 208) was completed in the southwest corner of the grounds. Finally in 1993 a multi-story office building addition (Building 210) was constructed on the rear elevation of Building 2. Building 210 was increased by two stories in 1999.

In 1988 the Northern California Institute of Research and Education (NCIRE) a private, non-profit, research corporation, was founded an the San Francisco Veterans Affairs Medical Center grounds to administer VA-approved research and related education funding. NCIRE has been expanding rapidly and currently administers over $25 million in research funds. Since 1988 NCIRE has been housed in a series of temporary buildings and portables erected on various unoccupied sections of the grounds. In 2000 NCIRE moved into Building 14, a new structure placed on Veterans Drive between Buildings 6 and 18.