Larkins Building was the site of a transit car barn from 1892 through 1916. 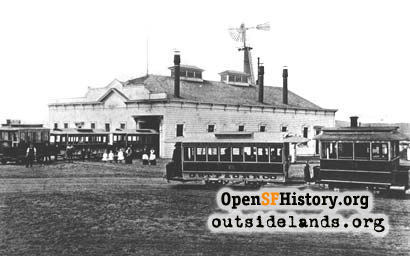 The Geary Street Park & Ocean Railway ran on the roads of the Richmond District from 1892 (when the tracks were extended from Central Avenue to 5th Avenue) until May 12, 1912. The city then took over the franchise, creating the first Municipal Railway (Muni) line.

Before the cable track extension from Central, passengers reached Golden Gate Park by transferring to GSPO's steam motor line. These "steam dummies" are shown above with their car barn on the northwest corner of Point Lobos Road (Geary Boulevard today) and First Avenue (Arguello Boulevard today).

In 1898, the GSPO built a new car barn of brick on the same site. The building (seen below) has had a series of uses over the years. It was a bakery and warehouse for Sperry Flour in 1916. In 1919, the Larkins Carriage Company remodeled and stuccoed over the building. The name "Larkins Building" can be seen incised on the upper corner of the building's front today. The Larkins Carriage Company was a historic San Francisco builder of fine carriages, but as the automobile supplanted carriages, Larkins began making custom-made bodies for auto and truck chassises. The company even had a contract to make wooden frames for airplanes in this building.

Spencer Buick occupies the historic larkins Building on the northwest corner of Geary and Arguello in the view from December 1961, 1961 - SFPL - Assessor's Negative Collection

By 1928, the building had become a garage and starting in the late 1930s Muni used the upper floors to store buses. After World War II, the structure became the first site for a mini "auto row" of car dealerships that stretched from Arguello to 11th Avenue along Geary Boulevard. Today the Larkins building is an office and stationary supply store, with the convenience of parking on its upper floor. 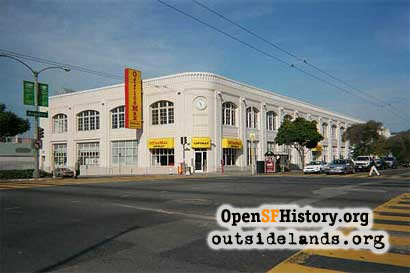 More on Richmond District streetcars and trains in Streetwise!

Thanks to When Steam Ran on the Streets of San Francisco, by Walter Rice, Ph.D., and Emiliano Echeverria for GSPO information! And great thanks to John Freeman for the post-GSPO knowledge.


Contribute your own stories about the Richmond!