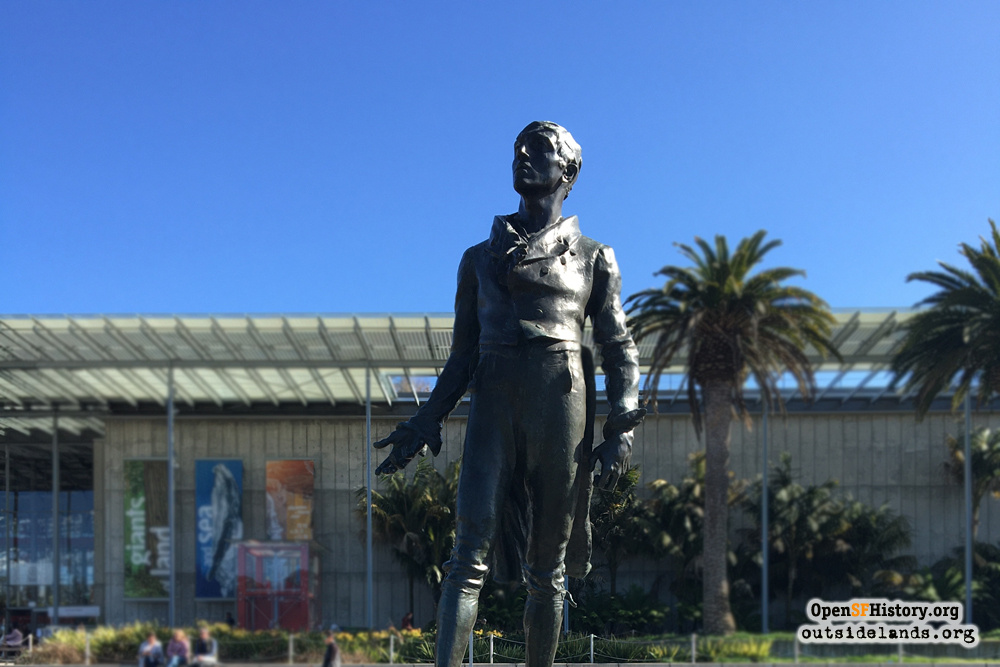 Born in 1778 to a wealthy Anglo-Irish family, Robert Emmet led the 1803 rebellion in Ireland along with his fellow United Irishmen, Thomas Russell and James Hope. The rebellion ultimately ended in military failure. During his trial for treason that followed, Emmet, speaking from the dock on September 19, 1803 delivered perhaps the single most effective and affecting speech in the history of Irish nationalism. His speech is particularly well known for the final lines, which read:

"I have but one request to ask at my departure from this world. Let no man write my epitaph; for as no man who knows my motives dare now vindicate them, let not prejudice or ignorance asperse them. Let them and me rest in obscurity and peace, and my name remain uninscribed, until other times and other men can do justice to my character. When my country takes her place among the nations of the earth, then, and not till then, let my epitaph be written. I have done."

Emmet's life, though short, was rich with deed. Emmet is viewed as a romantic hero (he had by all accounts an epic romance with Sarah Curran), a person great of intelligence and eloquence, and a man of principle and passion. But above all else, Emmet was a man of Republican ideals. A man who took his ideological lead, not from the French Revolution which had inspired Wolfe Tone and the 1798 Rebellion in Ireland, but from the American Revolution, stories of which filled the Emmet household in his youth. It is recorded that Emmet's ultimate ambition in his teenage years was to be an Irish George Washington.

The words spoken by Emmet on that day in September 1803 have reverberated throughout history, shaping perceptions and ideals, values and principles. In the U.S., they resonated particularly strongly with a young Abraham Lincoln - born five years after the death of Emmet - who, it is noted, learned Emmet's valedictory off by heart as a young man and would recount it to guests who visited the Lincoln homestead in Perry County, Kentucky.

Speaking recently, the Irish historian and broadcaster, Myles Dungan, noted the enduring influence of Emmet on Lincoln. In February 1865, Lincoln was reviewing the death sentence of a young confederate spy when he received a petition from Willard Salisbury, no friend of Lincoln, to support the young man's plea. In his petition, Salisbury requested the President to review the young man's defence, to compare it to Emmet's and to act how the President of the United States should act. Lincoln duly commuted the death sentence.

A statue commemorating Robert Emmet stands outside the Academy of the Sciences in Golden Gate Park. It was unveiled on July 20, 1919 on the occasion of the visit of the "President of the Irish Republic", Eamon de Valera to San Francisco. De Valera's visit to San Francisco was part of a nationwide tour of the U.S. seeking recognition of the newly declared Irish Republic and Ireland's first independent parliament - Dáil Éireann - and seeking to raise funds to support the new independent state. 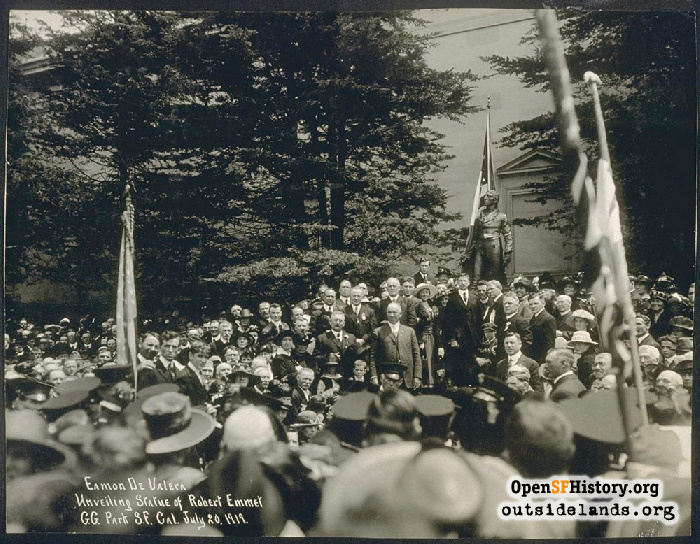 The unveiling was a prestigious occasion with the great and the good of the Irish and Irish-American community in San Francisco. There were reportedly as many as five hundred in attendance. This picture captures well the bustling nature of what was a red-letter day for the Irish in San Francisco.

The statue by Kerry-born sculptor Jerome Connors is one of four in existence, the first of which was unveiled in 1916 in Washington D.C. and which today stands in Robert Emmet Park on the same street as Ireland's Embassy to the United States. The statue in San Francisco was the second to be unveiled in 1919 and the remaining statues are today resident in St. Stephen's Green in Dublin, Ireland (donated by the U.S. Congress to the new Irish Free State in 1922) and in Emmetsburg, Iowa.

When I reflect on the celebrations around the unveiling in 1919, it is clear that while the statue is undoubtedly a tribute to one of Ireland's most eloquent revolutionary leaders, the statue and its placement in the prime position outside the Academy of the Sciences has a broader meaning.

Firstly, it is an appropriate representation of the deep Irish heritage in this city, which is perhaps not as evident today as it once was. San Francisco was a welcome home for the many Irish who made their way west following the gold rush. Coincidentally, this occurred at the same moment as our national tragedy in Ireland, the Great Famine (1845-49), the result of which was over 1.5 million people leaving our island, many of whom sought refuge in the U.S.

Many of these ventured west. By 1881 fully one third of San Francisco's population was identifiably Irish or of Irish descent and the list of prominent Irish people in the history of the city is remarkable when viewed as a whole.

People such as Frank McCoppin, who was elected Mayor of San Francisco in 1867, the first Irish-native to lead any major city in the U.S. Malachi Fallon, the city's first chief of police appointed in 1849, who hailed from Cork. One of the earliest Irish settlers was the surveyor, Jasper O'Farrell, the man responsible for Market Street and for the original 1847 grid system on which this great city was built. In business people like John Sullivan, founder of the Hibernia Savings and Loan Society, which was the first State-chartered bank in California, amongst others. Another Irish native, Kate Kennedy, was a distinguished educationalist, suffragist and labour activist who launched a successful campaign for equal pay for equal work in 1874 and was one of the first women to run for elected statewide office - Superintendent of Public Instruction - before women had the vote.

Secondly, it reflects deep connection to and affinity for Ireland retained by many in attendance and the Irish / Irish-American community in San Francisco. Ireland is about 5,000 miles away from San Francisco but the strength of the connection between the City by the Bay and the Emerald Isle belies the distance. This is evident in the manner in which this city celebrates Irish traditions - the first St. Patrick's Day parade for example dates back to 1851. The parade is organised by the United Irish Societies of San Francisco which also organises the annual Robert Emmet Day celebrations that include a march to the statue, a re-enactment of Emmet's "Speech from the Dock," and a fun Irish musical medley at the Golden Gate Park Band Concourse.

The depth of the connection is also reflected in the enormous generosity for Irish causes. When Douglas Hyde, the President of the Gaelic League, one of the leading organisations of the late nineteenth- and early twentieth-century Gaelic cultural revival in Ireland, visited San Francisco in 1906 he left the city with around US$20,000 (half of which he later returned after hearing of the 1906 earthquake). In the fund-raising drive that followed de Valera's 1919 visit, over US$2,000,000 was raised in California under the leadership of Fr. Peter Yorke to support the fledgling state - an enormous sum of money.

Finally, as illustrated by Emmet's connection to Presidents Washington and Lincoln, the statue reflects well the breadth and depth of Ireland's relationship with the United States of America, with the State of California and with the City of San Francisco.

A relationship in which each side in turn has throughout history shared their values, their knowledge and their wealth to the betterment of the other - a mutually beneficial continuous circle of inspiration - a 'fáinne inspioráide' - that continues to replenish and revitalise the Irish-American relationship. There are few figures in the shared history of Ireland and the U.S. who encapsulate this 'fáinne inspioráide' better than Emmet, which is why it is so fitting that he stands so proudly in Golden Gate Park today.