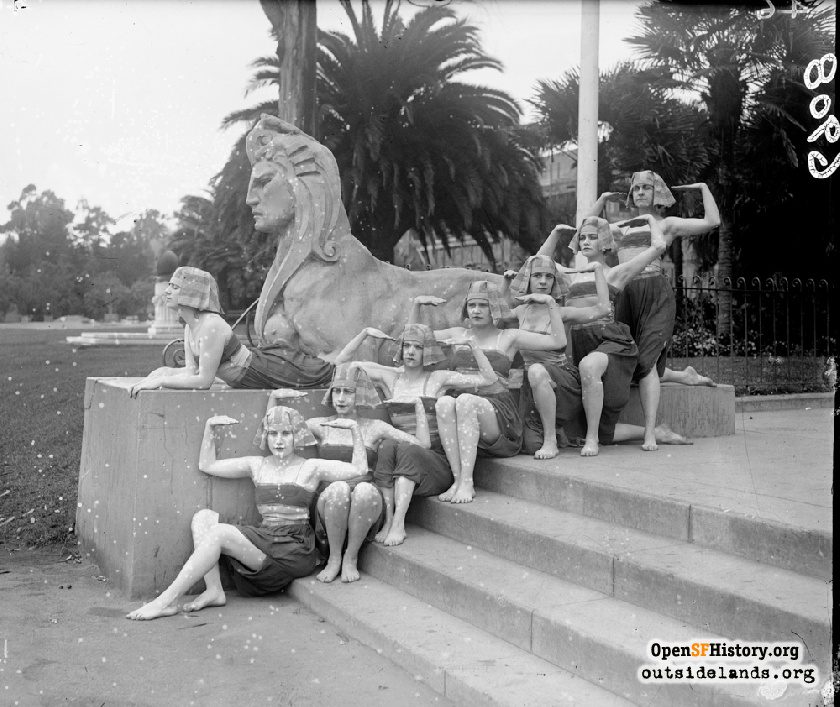 The story of the sphinx statues in front of the Memorial and de Young Museums.

by John Martini
(Originally published in Outside Lands magazine, Jan-Mar 2017) 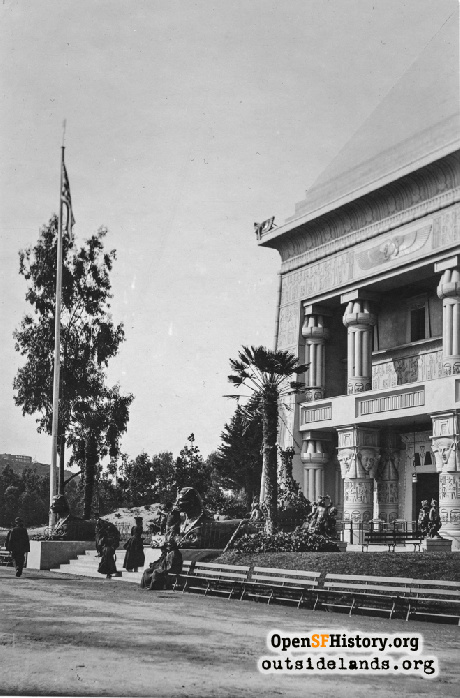 View northwest across roadway to entrance of Fine Arts Building for 1894 Midwinter Fair, which was renamed Memorial Museum in 1895 and eventually became part of de Young Museum. Original sphinxes and Dore vase surrounded by Cupid statuary later placed in front of the Spreckels bandshell. Sweeny Observatory in background. The observatory was a gift to the park from Thomas U. Sweeney (Sweeney's name was misspelled on the observatory.), circa 1900 -

My grandparents' house was only two blocks from Golden Gate Park, so I spent a lot of time with my mom exploring the park and visiting the museums and aquarium flanking the Music Concourse. As a preschooler, I was especially fascinated by two incongruous statues standing forlornly near the de Young Museum: a pair of stylized Egyptian sphinxes flanking a dirt driveway to a dusty parking lot.

I had no idea what the statues were for, but they made a great target for climbing and perching. Turns out these sphinxes (sphinxi?) once flanked the entrance to the "original" de Young museum, a vanished vestige of the 1894 Midwinter Fair.

Their history starts with a public relations effort of the 1890s, when city boosters decided to highlight San Francisco's mild weather by hosting a "California Midwinter International Exposition" that would be held--literally--during the middle of a balmy California winter. Plans were made to move many of the most popular exhibits from the just-concluded Chicago Columbian Exposition of 1893, to the still-new Golden Gate Park, which was selected as the location for the fair. In an amazingly short time, money for the fair was raised and workers began grading a large central court in the heart of the park near the 10th Avenue entrance. Around the oval-shaped court, today's Music Concourse, they constructed several large pavilions and exhibition halls. Before long, train loads of exhibits and dismantled midway rides transplanted from Chicago began to arrive at the park, brought in via train tracks specially built along today's Great Highway and Lincoln Boulevard.

One of the main exhibit halls fronting the oval-shaped concourse was the Fine Arts Pavilion, sometimes also called the Fine Arts Building. For some reason, the pavilion's designer chose a baroque interpretation of classic Egyptian architecture for the building's exterior, lathering it with papyrus stalks, goddess-headed columns, hieroglyphics, and a pyramid-shaped superstructure above the main entrance. Flanking the stairs leading to the entrance was a pair of black sphinx statues, described in contemporary literature as being made of carved granite or onyx.

The Midwinter Exposition was surprisingly short-lived, running only from January 27 to July 4, 1894. During its brief existence, though, the fair drew an estimated 2.5 million visitors. As a public relations move, the fair was a great success.

The following summer, nearly all traces of the fair were dismantled and removed from the park. Some of the main attractions, including a 100-foot-diameter "Firth Wheel" (a competitor's version of a Ferris Wheel) and an embryonic roller coaster, were purchased by Adolph Sutro and relocated to a midway near his new Sutro Baths. Two of the most popular pavilions remained, though: the Japanese Village and the Fine Arts Pavilion. The Village, of course, became the Japanese Tea Garden, while the Fine Arts building was re-purposed as a city museum showcasing a marvelously eclectic collection of historical, natural, and artistic treasures, a true "cabinet of curiosities." Renamed the Memorial Museum, it reopened on March 24, 1895. The public was admitted free of charge.

The black sphinxes became permanent fixtures outside the museum, shortly joined by another popular artifact of the fair, Gustave Dore's monumental bronze vase titled "The Poem of the Vine" (also still located in the park). After the Spanish-American War, a collection of cannon captured in Cuba and the Philippines were displayed alongside the sphinxes and vase. 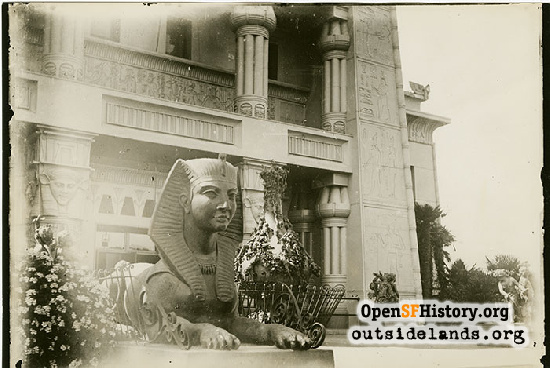 In May 1905, the true nature of the sphinxes became obvious when the Park Commissioners reported that "a plaster-made Sphinx at the entrance to the Memorial Museum collapsed yesterday. The Sphinx was a heritage of the Midwinter Fair, and went to smash on account of interior decay. A companion Sphinx will be removed. The figures of so-called ornaments in plaster when in a good state of preservation added nothing to the beauty of the entrance to the museum, and the collapse is not regretted." (San Francisco Call, May 20, 1905)

So much for the legends of onyx or granite statues. The sphinxes must have had some sort of public following though, because only a month later the Commission reported that renowned California sculptor Arthur Putnam "was authorized to model a sphinx for the Memorial." (San Francisco Call, June 3, 1905).

Arthur Putnam apparently received a grant for the new statues through the generosity of philanthropist Mrs. William Crocker, and, in late 1905, he started work in a studio he shared with fellow-sculptor Earl Cummings. The first mention of "our" sphinxes is found in an article from the San Francisco Chronicle dated January 5, 1906:

"In Cummings' studio are the casts for the sphinxes which are to be placed in front of the Memorial Museum in Golden Gate Park made by Arthur Putnam in his fine heroic style. With the available funds, it is not possible now to put these figures in marble or granite, but an expert worker is to reproduce them in cement. This will be done within a few weeks..." 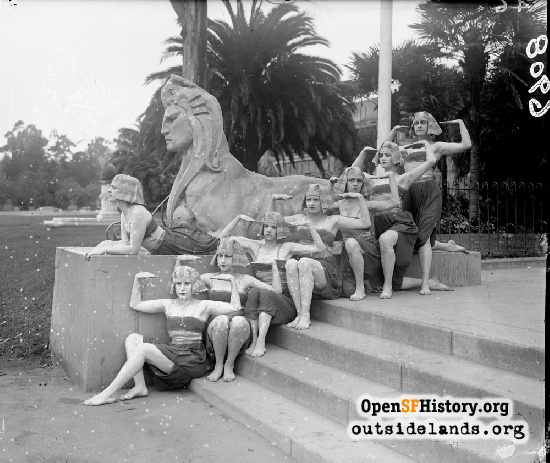 The article noted that Putnam wasn't currently in residence, though, but was on an extended tour of Europe with his wife. Putnam would miss the 1906 earthquake and fire, but his studio was destroyed.

In the meantime, the remaining black plaster sphinx (the western half of the pair) remained in place for at least another year, and is visible in photos of the quake-damaged museum taken shortly after the 1906 temblor.

According to an online biography of Arthur Putnam, he and his wife returned from Europe sometime after the fire and quake and he set up a new studio in the wilds of the outer Sunset District. There he completed work on the sphinxes.

"They [the sphinxes] were set up in front of the museum in Golden Gate Park in June of 1907... He modeled the body of the sphinx after a lifelike cat, but gave the mythological creatures a woman's face, a face that he modeled on that of his old friend Alice Klauber, the San Diego artist." 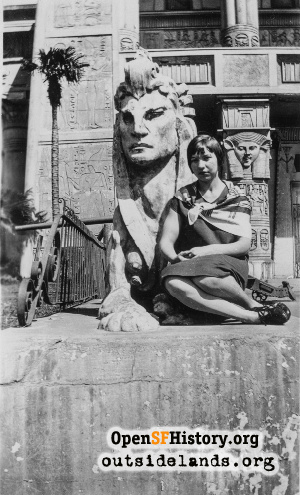 Woman posing on Sphinx in front of old de Young Museum. Field gun in background., circa 1925 -

Research on the concrete sphinxes turned up an odd fact: a large concrete lizard originally crowned each statue's head. These immediately became something of a curiosity to the public, and in January 1915, the San Francisco Chronicle ran a feature article titled "Why The Lizard?" During her research, journalist Alice Eccles contacted Arthur Putnam and queried him about their purpose. Putnam was vague--and somewhat miffed--about the question:

"It irritates me so much that people make such a fuss about that lizard. It is just a detail in the whole scheme. Why do they miss the whole effect and concentrate upon that small creature? He belongs there--that's all."

Call it the artists' prerogative.

At some point the museum staff eventually grew tired of repairing the lizards and removed them entirely, smoothing over the rough spots and leaving only curious nubs of concrete atop the statues' heads.

During the 1910s, the city decided the original Memorial Museum building was too antiquated and small for the city's growing collections. Among other problems, the little building only measured 120'x60' and lacked windows that would allow natural light into its galleries. In 1919, it was replaced by a new museum building named in honor Michael de Young, one of the original organizers of the 1894 Midwinter Fair and major benefactor of the Memorial Museum.

When the new de Young Memorial Museum opened, it featured a dramatic main entrance several hundred feet west of the old museum, relegating the 1894 building to a secondary status as an exhibition hall. Ten years later, the old Egyptian-styled Memorial Museum was demolished, leaving only the twin sphinxes behind to mark its location. 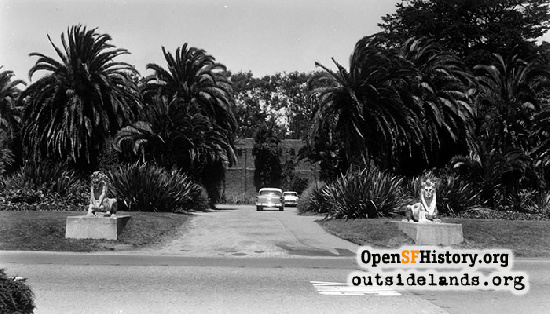 Sphinxes that once framed the entrance to the old Memorial Museum, later the de Young. Entry to staff parking lot, 1950s., circa 1955 - WNP Collection, wnp27.0967

For many decades, the site of the vanished Fine Arts Pavilion served as a parking lot for the de Young staff, the two sphinxes flanking a rude driveway leading to the unpaved lot. When the parking lot was landscaped around 1960, the statues remained in place but marooned in a sea of lawn. There were no clues as to their history or original purpose, but they served as marvelous climbing toys for generations of young San Franciscans--like your author.

Following the 1989 Loma Prieta earthquake, the damaged de Young Museum was demolished and rebuilt in its current (and to some, controversial) form. As part of the new museum, it was decided to pay homage to the vanished Fine Arts/Memorial Museum by refurbishing the sphinxes.

When the new de Young Museum opened in October 2005, the sphinxes had been restored to near original condition--but minus their lizard toppers--where they continue to serve as climbing targets for a third century of young park visitors.