The Jennings Giant Camera was built by Floyd Jennings in 1946 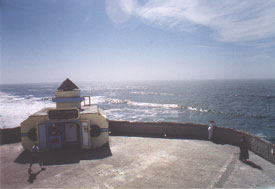 The proprietor sits behind a window in a tiny room not much larger than a phone booth. He collects the $1 admission and directs you to the door. "Enjoy the view."

You enter a small, dimly lit room. In the center of the room is a large parabolic disc. It glows with the swirling active motion of the rocky Pacific coast. The view is hypnotizing. You are standing in the belly of the San Francisco's Giant Camera camera obscura---a functioning relic.

Around 1957, Jennings and his assistant Gene Turtle remodeled his camera obscura so that it more resembled a giant camera. According to Turtle, this was done at the suggestion of George Whitney. The Giant Camera took on its familiar boxy oblong shape and was painted bright yellow with a bold blue stripe. The words GIANT CAMERA were painted along the side. To complete the transformation, two large barrels were affixed to the front of the camera to resemble the knobs used to advance the film on box cameras of the day. The Giant Camera as we know it today was born.

The boxy yellow Giant Camera is an example of "signature" or "duck" architecture, a style of building that intentionally advertises itself through its unique shape, raising questions and inviting further investigation. The term was coined by Philadelphia architect Robert Venturi, and named after a poultry shop built on Long Island in the 1930's in the shape of a big duck. Designed to draw in the curious passerby, the Giant Camera still has this strange magnetic appeal today.

Around the time that the Giant Camera had been remodeled, Floyd Jennings and Gene Turtle began experimenting with the concept of the camera obscura, including a portable version of the camera, which was documented in LIFE Magazine. The two went on to complete two more camera obscura buildings, also built at locations chosen for their stunning natural beauty and large tourist draw. The first was built at the "Garden of the Gods" at Colorado Springs, Colorado and the second at Lookout Mountain in Chattanooga, Tennessee. Both of these cameras have been unceremoniously dismantled and their whereabouts are unknown.

Duck Architecture works. It was the strange appearance of the Giant Camera that first drew me to it. On a three-day trip to San Francisco in February of 1999, I found the Giant Camera while looking for the Musée Mécanique. Like most people that walk by the camera, I had no idea what it was. The strange building which advertised itself relied on the curiosity of the individual, and their willingness to part with their money, to answer any questions that its bizarre shape raised. I paid the $1 admission price and was amazed with what I found. Little did I know that this whimsical decision would begin a two-year journey towards the preservation of this strange building.

On the way out of the camera, a familiar sinking feeling came over me as I stopped to speak to the proprietor. He told me that the National Park Service, who owns the land on which the Giant Camera sits, had plans to renovate the Cliff House and the surrounding Sutro Historic District, and did not want to renew the lease when it expired on January 1, 2000. The camera was not given a demolition notice, but an eviction notice instead, which was a bit of a Catch-22 for the camera. David Silver is President of the International Photographic Historical Organization (INPHO), a nonprofit historic photography organization that helped save the camera when it faced demolition in the late 1970s. He pointed out that the proposed eviction by the NPS was, in fact, a demolition notice. "There is no practical way to move the Giant Camera," he told me. Owner Robert Tachetto agreed when interviewed in early 1999, saying that the Giant Camera would need to be hoisted out of its current location by a giant crane. The delicate piece of machinery was near impossible to relocate. In addition, the location of the Giant Camera was too crucial a component of its purpose. It can be argued that the view itself is historic and, except for the southern view along Ocean Beach, has changed very little since Jennings built the structure in the late 1940's. 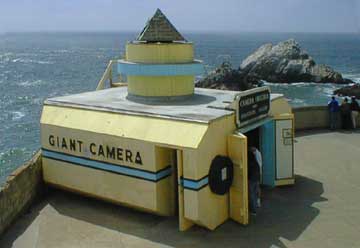 I returned to Philadelphia and began a long-distance campaign to "Save the Camera." I launched a Web site, and contacted two people who had information about the Giant Camera on their Web sites; these people were Beverly Wilgus, a camera obscura expert based in Maryland, and Californian Peggy Vincent an expert on Playland-at-the-Beach. I contacted the National Park Service and was bounced between different Public Relations and Project managers, one of whom actually asked me why I didn't "buy the camera and bring it to Philadelphia." Fortunately this attitude did not prevail at the NPS.

In the summer of 1999, I launched an email mail petition that helped bring notoriety to the issue and invited some local press in the Bay Area about the threatened Giant Camera, that unfortunately had words like "eye-sore" and "kitschy" in them. An article in the San Francisco Examiner drew the attention of Daly City resident and full-time activist Tom Roop. Roop was just what the Save the Camera movement needed: a dedicated person on the front lines, with a penchant for letter writing.

When Tom and I began to build our argument for preservation of the Giant Camera we faced a challenge given to us by the historians at the park service: "Prove to us that the camera is significant enough to be preserved." They meant that it had to fit a very distinct set of criteria established by the department. The Giant Camera clearly fit criteria "C." To get the information we needed we used a reliable source, the Internet, and email in our quest for factual information on the other two cameras in Jennings and Turtle's body of work. The other two cameras at that point had only been documented in a book published in the 1970s, which was considered unreliable by the park service due to incorrect dates.

The connections that resulted from our search to prove the camera's significance were surprising and very rewarding. A phone interview with Gene Turtle confirmed that the same casts had been used to mold the mounting and other components of the other two camera obscuras. This would be helpful to draw physical connection between the cameras, were they available to compare. Gene Turtle also revealed that the camera obscura at Lookout Mountain had been featured on the cover of a 1960 LIFE Magazine. An email inquiry by Tom Roop to Lookout Mountain Inc. yielded a response by fourth-generation owner of the attraction, Tom Chapin, who confirmed that the camera obscura had been dismantled and given to Covenant College in Tennessee in the early 70's. From there the trail went cold.

A few months later, Joyse Lohse of Colorado provided us with a clue to the history and fate of the Garden of the Gods Camera Obscura. She said that she had visited the camera when she lived in the area, and could confirm that it had survived into the 1980s. Joyse transcribed an article from the Colorado Springs Gazette Telegraph from July 31, 1955 entitled "Garden of Gods Camera Obscura Second in Country." The article, which clearly established the date the camera obscura opened, stated simply:


"The second attraction of its kind in the United States the camera obscura is operating at High Point in the Garden of the Gods. The other is stationed on Seal Rock in San Francisco."

This article also revealed a detail that the Colorado camera shared with the San Francisco camera. It described an apparatus that allows the camera to stop and focus on certain picturesque views for a few moments before moving on. Gene Turtle had described the same device in the San Francisco camera and had told us that it had been fashioned from a mechanical traffic light. The article described its effect:


The rotation of the reflector is stopped from time to time while a tape recording of a well-modulated voice emphasizes certain points of interest. This commentary continues as the rotation goes on.

The mechanism that performed this action in the San Francisco Giant Camera is now not functioning. Now that the camera is on the National Register, perhaps it will have easier access to grant money that will help allow for this type of repair.

And so, as we pieced together the puzzle of the body of work of the Jennings/Turtle collaboration, it became increasingly clear how important the San Francisco camera was. It is not only the first of three built, but now it is the last surviving camera obscura in the body of work of a master. Floyd and Turtle made a significant contribution to the craft of camera obscuras in the United States, one that was unmatched in the twentieth century.

In the face of this compelling evidence of the importance of the Giant Camera, an overwhelming and ongoing public outcry, and the rejection of the combined Sutro District nomination plan, plans to move or alter the Giant Camera were dropped at the end of 2000. An official statement was sent to owner Robert Tachetto, by park Golden Gate National Recreation Area Supervisor Brian O'Neill. It read:

The California Office of Historic Preservation (SHPO) has told us there is general agreement in their office that the Camera Obscura is eligible for the National Register of Historic Places under Criterion C, as a rare example of its type. The National Park Service will move forward in this regard, and will work with you, as the owner of the Camera Obscura, to see that the structure is treated as historic..."

And so the Giant Camera became the sole nominated structure in the Sutro Historic District in late 2000. The nomination received praise on the city and state levels and went before the keep of the register in March of 2001. The Giant Camera earned its place in American cultural and educational history on May 23, 2001 when it was quietly added to the National Register of Historic Places.

Listed as the Camera Obscura, it is now officially recognized as being the oldest freestanding Camera Obscura still in its original location in the United States. The Friends of the Giant Camera would like to thank everybody who contributed to the success of this campaign over the last two years. Thanks to everyone who made a call to the NPS, sent an email or letter, signed the petition, shared a personal memory of Playland and the Giant Camera, attended meetings and hearings, called politicians, wrote an article, provided photos and information on the other Jennings camera obscuras, painted the camera, made a photo collage, did research, posted information and updates on their Web sites, provided their expertise on camera obscura history, or gave personal insights on working with Jennings and helping to build the Tennessee and Colorado camera obscuras. This campaign has been very rewarding and we should be very proud of a job well done. Long Live the Giant Camera!

Links:
Save the Giant Camera site
The Official Site!

The Magic Mirror of Life: An Appreciation of the Camera Obscura
Jack and Beverly Wilgus have terrific photos and lots of information on the Giant Camera