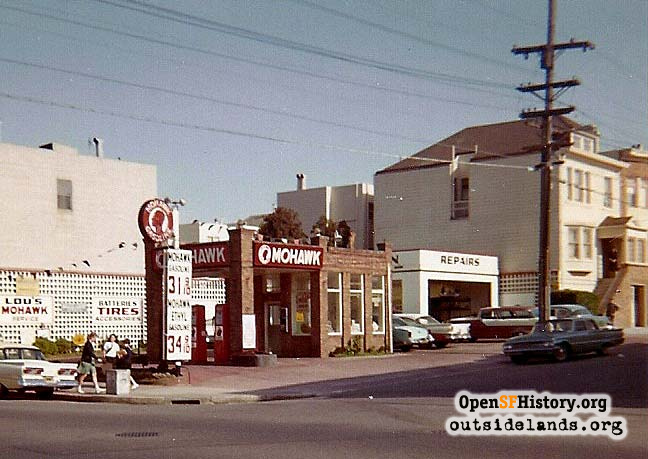 The story of the beautiful 1920s gas station on the corner of 16th Avenue and Irving Street. 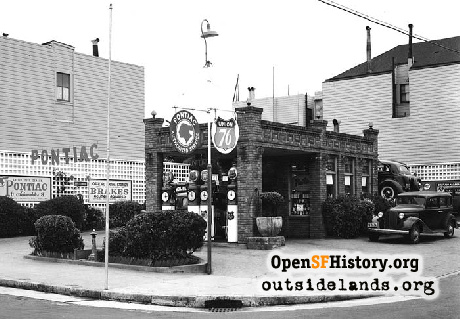 In its heyday, the gas station at 16th Avenue and Irving Street provided gasoline and automobile servicing, as well as new and used Pontiac cars., circa 1940 -

Next time you’re in the Sunset District, go to 16th Avenue and Irving Street to see a piece of history. The now-closed gas station on the southeast corner was once a neighborhood fixture and may soon be gone. This is the story of the old Mohawk gas station and Jack Goldsworthy, who owned the station and lived next door until his death at the age of 86 in October 2012.

I was fortunate to interview Jack Goldsworthy in October 2007 and to meet his family and friends in October 2012. I remember Jack as a kind, funny man who was generous with his time and memories. His words in this article are from our 2007 interview.

John Henry “Jack” Goldsworthy was born in San Francisco on December 12, 1926. As a child, he went to Francis Scott Key Elementary School and lived in a rented house on 45th Avenue between Irving and Judah Streets (he remembered the old firehouse there). “In those days, it was all sand dunes,” Jack said. “You could buy a lot for $300—$300 for a sand lot with 25-foot frontage by 100 feet deep. Then we had this Henry Doelger. He came out and started to build houses, and then it all got developed.” 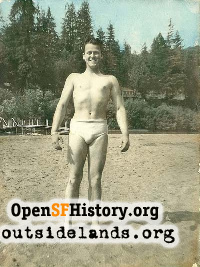 Jack Goldsworthy as a young man. -

Also in 1926, Jack’s maternal grandfather, Charles Kleinclaus, opened the gas station at 16th and Irving. The 1930 City Directories list Kleinclaus as “jr mgr” of the Sunset Service Station on the “SE corner of 16th Ave” and Irving. At the time, he lived at 1314 16th Avenue, in the house where Jack later lived. According to Jack, this house once sat on Irving Street near the corner. His grandfather had the house moved to 16th Avenue to make more space for the gas station. He also built the apartment building next door on 16th Avenue.

Jack and his parents moved to 41st Avenue when Jack was attending Polytechnic High School. When he was young, Jack worked at the gas station, and as the years passed his memories of neighborhood residents revolved around the work he did on their cars: “Magnola lived up on Judah Street. He drove a Hupmobile, and I used to try to keep it running for him… I remember the lady of the creamery [Ellen Kieser of Kieser’s Colonial Creamery at 1833 Irving Street]. She drove a Buick convertible, and I used to service it… I remember two or three sisters. Their name was Furlong and they ran a department store [Furlong’s Dry Goods at 1301 9th Avenue]. They had a Buick Roadmaster that I used to service for them… We used to go to Whitney’s at the Beach—Playland. Mrs. Whitney had about seven vehicles—a pickup truck, a Cadillac, different ones. I used to try to keep all of her cars running.” 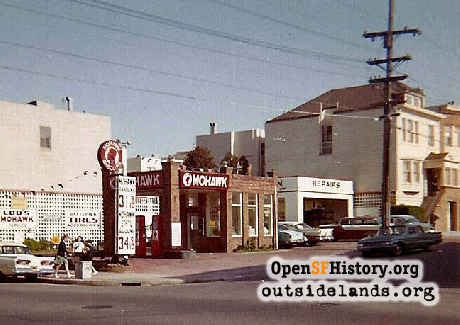 For many years, the station sold Mohawk gasoline and serviced cars in the white building behind the station. The Jack Goldsworthy home stands on 16th Avenue next to the station., circa 1968 -

After Jack graduated from high school in the 1930s, he received a draft notice. He remembered that during the physical examination, the induction center people said, “You’ve got a bad ankle…go home, go to school, get a job.” But Uncle Sam wasn’t finished with Jack. “Fifteen years later [1954] they called me up again.” He remembered meeting “some interesting people” during the two years he was in the army: “one of Bing Crosby’s sons… and a fellow who played football for Southern California—Frank Gifford…and some guy on television. I can’t think of his name.” 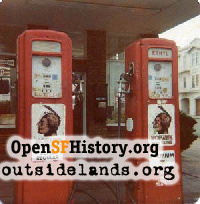 Jack remembered that the years at the Sunset Station were rough. They were “pumping gas, fixing flat tires, lubricating cars, and selling batteries,” Jack explained. “It just wasn’t enough. It was something, but it just wasn’t enough. My grandfather had the chance to get a small Pontiac agency.

“We’re selling used cars, we’re selling new cars, and we’re working on cars. Things were going pretty good. All of a sudden, an executive from General Motors comes in dressed in a suit and tie. And he says, ‘Look, I know this is a small neighborhood dealership. You’re not downtown on Van Ness Avenue. But San Francisco is a metropolitan city, and we don’t want our products sold out of a little service station. We want a showroom. You don’t have to make a big splash, but we want at least three new cars in the front window.’

“Across the street was a vacant lot,” Jack continued. “Grandfather says, ‘What if we buy that lot across the street and build our showroom there?’ General Motors says, ‘That would be wonderful.’

“So we buy the lot and we clean it up. We are just ready to call the carpenters to come out and put up the new building. All of a sudden, there’s a man here from City Hall. He says, ‘I don’t want you to do any more with that lot. The city is going to take that lot and build a firehouse.’” Jack’s grandfather went to court and asked why the city could not just remodel the nearby firehouse on 10th Avenue, but the fire department argued that it needed a corner lot for the hook-and-ladder trucks. Then the City of San Francisco took the lot by Eminent Domain and things changed for the gas station. “At one time, we had a nice business there,” Jack complained. “It all went downhill” after they had to stop selling cars. Jack’s grandfather gave up on the gas station sometime in the 1950s. 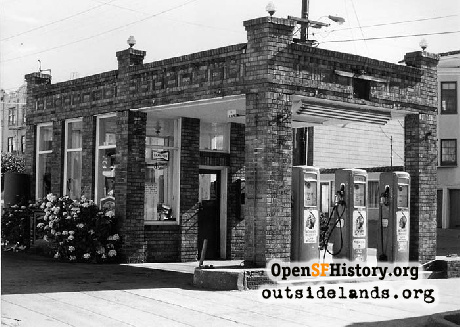 The elegant brick gas station building at 16th Avenue and Irving Street when the old Mohawk gas pumps were still in place., circa 1979 -

Historians, neighbors, and preservationists pay attention to the brick gas station office that still stands behind a chain-link fence at 16th and Irving. In fact, in 2012, when the white service bay in the back of the lot was being demolished, emails were flying as people worried that this action signaled the end of the gas station. Relief replaced panic, however, when people learned that the demolition permit was only for the service bay.

The City of San Francisco is also interested in the gas station on Irving. In 2007, Jack said that the people who work for the city “kind of like the building.” He explained further: “Once the city came out and said, ‘We like the architecture of the building. It’s old San Francisco—that’s what it is. However, if we have another earthquake… We would like the building raised and we would put rebar in the foundation.’

“I says, ‘I’ll tell you what. You write it up. Let’s write it up and see what it looks like on paper.’ 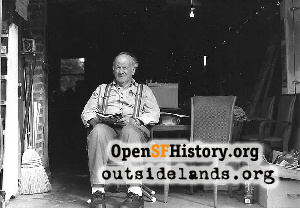 In his later years, Jack Goldsworthy would sit outside his garage on warm, sunny days and greet neighbors and passers-by. -

According to San Francisco City Directories, the gas station had several names over the years and was run by different people: Sunset Service Station and Courtesy Service Station (Jack was working there in 1940), Frank and Jim’s Mohawk Service (1960), La Prath Mohawk Service Gas Station (1963), and Louis (later Lou’s) Mohawk Service (1964). One of the last people to run the station (from 1964 to 1980) was Ludwig “Lou” Glowacki. A San Francisco Examiner article in 1980 showed him with the old Mohawk gas pumps explaining why he would likely close the station. In a situation difficult for us to understand now, the article explained that old gas pumps could only show gas selling for less than $1 a gallon. By 1980, gas prices had reached $2 a gallon. For a few years, many stations had been “half-pricing” their gas—doubling the price shown on the pumps. By this time, the Mohawk station on Irving, whose pumps could not go above 59.9 cents a gallon, was engaged in quadruple-pricing. The article noted that two large signs in the window stated that “the price per gallon and the amount of sale is one-quarter of the amount it should be.” The new law required that all old pumps be replaced by new ones before July 1, 1980. Glowacki could not afford the estimated $6,000 required for the upgrade. 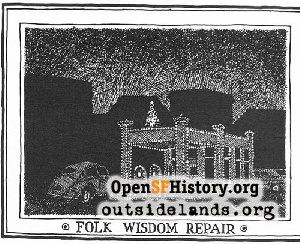 Several years later, Tim Grace renamed the business Folk Wisdom Repair and provided car servicing only (no gas) until the 1990s. Each December, Tim put a decorated Christmas tree on top of the station and sent Christmas cards to customers with illustrations of the station by artist Doug Nelson.

For many years, Jack Goldsworthy owned the corner lot at 16th Avenue and Irving Street. With his passing, no one is sure what will happen to the historic gas station building. For now, it still stands as a reminder of the early years of the growing Sunset District. Jack is remembered as a warm neighbor and friend, someone who loved cars (and fishing), someone who had a great sense of humor and a talent for good storytelling. With Jack’s passing, two treasures have been lost: Jack Goldsworthy, a man “without a mean bone in his body,” and his connection to the beautiful gas station on Irving Street.

The author wishes to thank Bruce Eng, Jack Goldsworthy’s family, Karen Olson, and Julie Alden for their assistance with this article.

More on the gas station: