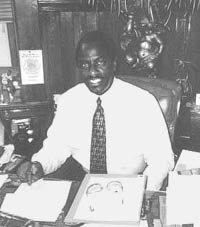 On July 27, 2003, Ingleside Presbyterian Church celebrated the 25th anniversary of Reverend Roland Gordon's arrival. "Reverend G.", who was recently honored as the 2003 Distinguished Alum of San Francisco Theological Seminary, remembers what things were like when he arrived:

"This church had died off to four members, the property was the eyesore of the community, the community called it the 'pink elephant.' Our presbytery pretty much had given up on the Presbyterian witness here at this site. So a few of my friends called me in to preach on Sundays, two ministers that knew about me. I was already a young preacher. I was in the seminary for two months and came over here to preach on Sunday morning to keep the worship service going, but I saw a bigger picture that the Higher Power was calling me to at this site. I liked the community. I saw the potential of the building, although it was outdated. The bathroom was so dilapidated, the women wouldn't even go downstairs to use it."

In thinking of how to revitalize the church and the local community, Reverend Gordon focused on one of the "pink elephant's" great assets:

"Well, when I saw the indoor gymnasium, being a former athlete, high school and college ballplayer, I knew. [Laughs] There was no doubt in my mind that the spirit had called me here, because, I mean, growing up, I still love basketball, but I was about thirty-four years old then. I thought about it, as a young person loving basketball, how we used to have to shovel snow off the court back in Gary, Indiana, to play. [...]

"I pretty much opened the doors of that gymnasium and the children came to me. This is part of my strategy. And all races, too. Predominately black, but all races would come and play. The kids want to play. That's the bottom line. So I would form teams, and some of the kids from the community would be the coaches or what have you. Then in other leagues, I have church leagues, other churches from that area would come.

"What I would do was use that as a teaching method to instill principles, self-discipline and teamwork, and the importance of education. I would always pull them all aside, and we would pray before we'd begin any games. I mean, like on one day there'd be maybe five games played, let's just say, so before everything started, we would pray. I would require that the kids would have to come to worship service at least once, I don't know how many times, out of the season. When the season was over, everybody got trophies. I had a banquet, so all the families came, all races. We brought them together, and everybody got trophies. So the word got out."

That gymnasium, better known now as "Fellowship Hall", has become what Mayor Willie Brown calls Reverend Gordon's "great legacy". Gordon began putting up photos of prominent African-Americans on the walls to inspire the youth who came to play basketball. He started with a photo of Muhammed Ali. He saw how positively the kids reacted to it, and how they'd come back whenever a new photo went up. "It began to build in all areas, there were African Americans that could do whatever there was. So it was a good image for the young kids to see that, you know, 'Hey, you are somebody. You can do whatever you want. What you want to be, you can be."

No one who enters Fellowship Hall for the first time, can hold back a gasp of amazement. The large room is now covered in a collage of images from floor to ceiling. The faces of athletes, politicians and entertainers are everywhere. High above is a stunning 1992 mural of African-American leaders. The collage has spilled into the halls and down in the basement. "So I'm doing Michelangelo. My goal is, where you see open space, you won't see any space between pictures, all you'll see is faces everywhere. No empty space anywhere. So I've got a lot of work to do."

Not all of Reverend Gordon's projects have been as universally praised. He found that getting out and tackling the issues of the neighborhood can make one a target. When he supported a plan for a senior housing complex across Ocean Avenue in the 1990s, racial epithets were painted on the church. Recent meetings over the Ocean Avenue revitalization plan became quite heated with businesses and residents at odds. "There was a little fight right there in the gym, and sometimes I'd have to hold folks to one side, or jump up and get ready to work it out, 'We've got to talk.' You know what I mean?"

In the course of his various projects with the church and in the OMI community, the Reverend keeps in his mind three phrases his mother used to say: 1) "God will provide." 2) "Where there's a will, there's a way." 3) "Every tub must sit on its own bottom." He explains the last:

"Don't make any excuse for anything. It's your journey. You've got to decide what you're going to do with it. Whether people influence you or not, you make the decision that it's your life. If you don't, and you reap what somebody else puts on you, that's your problem. [...] it's your life."

One of nine children in his family, the Reverend was born in the middle. "That's the way I see my ministry, right in the middle, with my arms locked with my people and we're all in a line going on with life. Leading from the middle."