Grace Evangelical Lutheran Church began as a Sunday school in 1940. 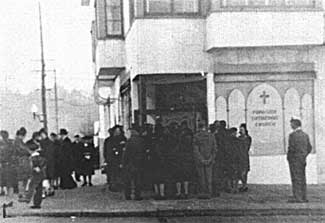 Grace Evangelical Lutheran Church began as a Sunday school in 1940 when Dr. Olive Erickson volunteered her home on 19th Avenue and Quintara so that the area's children didn't have to travel all the way out to the Mission district for their tutelage.

The group outgrew the doctor's office and began renting a place at St. Francis Episcopal Church Parish House, but actual services for the fledling congregation had to be held in midweek. Soon after a vacant storefornt was rented at 22nd Avenue and Vicente and Parkside Lutheran Church officially formed with the first services held on November 28, 1944. 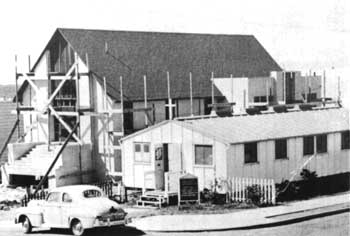 In 1945, Omar Otterness arrived as the first pastor and the name "Grace Evangelical Lutheran Church" was adopted. Naturally, a storefront was a step up from a room in a private residence, but the congregation sought a more permanent home. With a loan from the United Mission Advance, Grace Evangelical puchased a suitably-sized lot at 33rd Avenue and Ulloa Street. Marion Carlsen described the big obstacle:

"...the lot was a sand hill rising 100 feet in the air and known to kids in the neighborhood as the 'greatest sliding hill in these parts.'" 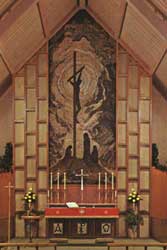 When enough sand was cleared away on the corner, a metal-roofed barracks went up as a temporary home. It was cold at night and on rainy days the din on the roof drowned out all sound within, but the barracks provided a home for services, Sunday school, community meetings, luncheons and more from 1947 to 1949.

Finally, on May 1, 1949 the first permanent building was dedicated on the western part of the property. In the late fifties, the congregation outgrew the modest building and commissioned architect Alfred W. Johnson to design as an addition a new sanctuary over a meeting hall which was completed in 1960.