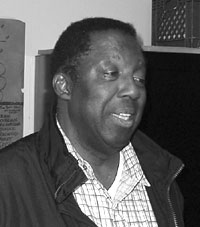 If you've attended a community group meeting in the OMI, you've likely met Al Harris. Al and his wife Mary are true neighborhood leaders, working for the last 25 years to improve the OMI in all areas: business development, safety, expansion of social services, transportation, and neighborhood beautification. It's hard to finder a friendlier guy than Al Harris, and he graciously sat down for an interview with fellow OMI resident Maria Picar. Some of Al's thoughts and memories:

His outlook on OMI's future: "I'm really pleased that we're getting a brand-new library on Ocean Avenue, and so that's moving forward. When they complete the undergrounding of the wires and the artwork for Ocean Avenue and all the other amenities that are planned, I think we're going to be very, very pleased with the way the community's going."

On rebuilding Ocean View Rec Center (to be renamed after Minnie and Lovie Ward): "First of all, I think it definitely is appropriately named. [...] Because everyone knows the Wards have done a lot to enhance this community over the years, including having their house shot up at one point, fighting drug dealers. So this is a great honor. Our Rec Center is so old and termite-infested, that it's going to be really nice to have a new facility. We've been working really hard with Park and Rec to make sure that we got the type of Rec Center that we all can be proud of."

On being a Buddhist: "...there's a Buddhist phrase that says like, 'When you're in Rome, do as the Romans do.' So there's no restrictions on what you can celebrate, what you can eat, how you should dress, everything. Everything is inside of you. Happiness is inside of you. The whole thing is to bring that out in a very positive way and to contribute to society. I hope we try to do that in any way that we can, from being a neighborhood activist to just trying to be good people."

On San Francisco: "I like when they say, the world's greatest city. That's it. This is it."