The House of Refuge

where a number of interesting civic institutions have called home

The House of Refuge Lot

WNP member Angus Macfarlane sent us this wonderful summary of the land on the east edge of the OMI, home of a number of civic institutions. In the future we hope to have more from Angus on the fascinating Industrial School, a place where even three-year-olds were sent to be "rehabilitated." 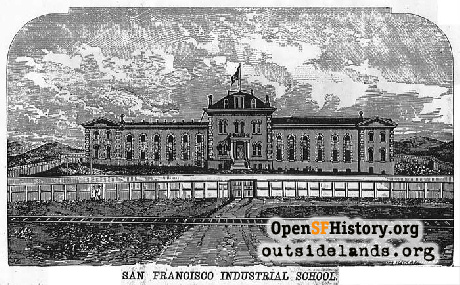 The year 2004 marked the 150th anniversary of the city's first development in the OMI. In 1854, San Francisco purchased 100 acres for $10,000 from John Horner at the intersection of the San Jose Road and the Ocean House Road (the precursors of today's San Jose Avenue and Ocean Avenue) for the construction of the House of Refuge—an institution to deal with neglected, abandoned, and delinquent children under the age of 16. The footprint of that 100 acres still exists on today's maps as Balboa Park and City College of San Francisco.

In May of 1859 the "San Francisco Industrial School" opened in an unfinished building on the House of Refuge lot. (Rather than teaching any sort of industrial art, the name apparently referred to rehabilitating the youth to be "industrious.") In 1865, the building was completed with the addition of the North Wing. That same year a 60-foot right-of-way was sold to the San Jose Railroad. This would later become the right-of-way for the Southern Pacific Railroad and finally Interstate Highway 280.

In the 1870s, the city built the House of Correction—ostensibly a correctional/rehabilitation facility for the slightly older criminals than those housed in the Industrial School, but not so hardened that they should be sent to San Quentin. For decades these two buildings stood almost side-by-side, separated by a wooden fence. Armed guards watched over the population of the House of Correction while unarmed "officers" supervised the Industrial School's population.

Originally both boys and girls were committed to the Industrial School, but the mischief resulting from the co-mingling of the sexes resulted in the girls being "farmed out" to the Sisters of Mercy at the Magdalen Asylum originally located on the side of today's General Hospital.

Crises, controversies, and scandals plagued the Industrial School. It was almost closed after only two years when the State of California opened a reform school in Marysville, but that institution was a failure from the start and shut its doors to send its remaining boys to San Francisco in 1868. Finally, with the opening of the State Reform schools in Whittier and Ione in 1890 and 1891, the Industrial School sent its last inmates away.

On the closing of the Industrial School, its building was taken over by the San Francisco sheriff to became a women's jail. After being badly damaged in the 1906 earthquake, half of the original building was razed. 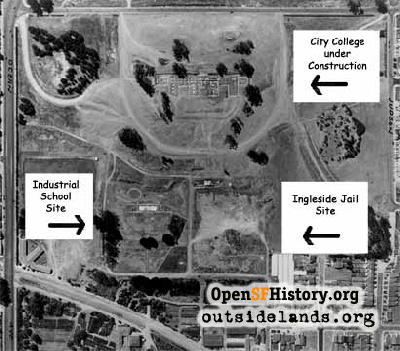 In the early 1900s, bits and pieces of the House of Refuge Lot were deeded to other city departments. In 1901, the fire department received a portion of land at the corner of Ocean and San Jose Avenues. In 1908, all but "the portion of the lot used for jail purposes and enclosed by high board fences, the stables, reservoir and the fire station" became Balboa Park. In 1909, the police department petitioned for, and received, a portion of the lot for a police station.

A fire at the wooden Ohio State Penitentiary in 1930 resulted in the deaths of hundred of inmates. San Francisco's wooden House of Correction, now called the Branch County Jail, or the Ingleside Jail, was termed a death trap which had long outlived its usefulness. Additionally, the city had now "caught up" with the House of Refuge lot: neighborhoods were being constructed around the county jail that was once criticized for being "too far from the city." A bond measure for a new county jail to be built in San Mateo County passed overwhelmingly.

The demolition of the old Industrial School and the House of Correction/Branch County Jail/Ingleside Jail ended one phase of the history of the House of Refuge Lot, but signalled the beginning of another: the construction of City College of San Francisco. The Industrial School once stood on the grounds of today's football field. Where Sgt. Young Lane leads to Ingleside Station, a dusty lane once continued across the railroad tracks to the entrance of the Industrial School. Once a year for the first 12 years, civic dignitaries would gather at the Industrial School to celebrate another anniversary, and to look upon their good works for the children.

Where now tens of thousands of autos speed along Interstate 280, occasional trains would pass along the 60-foot right-of-way. The great historical irony in all of this is that in the 1940s, when the Juvenile Probation Department was looking for a site for a new Juvenile Detention Home, their first choice was an undeveloped and unused portion of Balboa Park. The Park Commission rejected this request, resulting in the eventual construction of the Youth Guidance Center at its current location on Woodside Avenue near Laguna Honda Hospital. Thus, the House of Refuge Lot did not see a return of the delinquent children who in 1854 were the reason for its creation and existence.