Hounds once raced near today's City College of San Francisco. 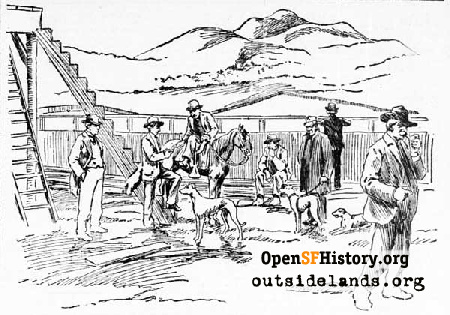 The bulldozers and front-loaders are finally at work excavating and grading the property around the former Kragen Auto Parts business. After years of talk and planning, 173 residential units and a new grocery store is on the way to the large lot on the north side of Ocean Avenue where Brighton and Lee avenues terminate between Westwood Park and City College of San Francisco.

From the 1890s to the 1910s, this land was the site of the Ingleside Coursing Park, a facility built for an ancient sport few have heard of today. In coursing, pairs of competing "sighthounds"—dogs trained to hunt with their eyes rather than by scent—were set off after a hare in a large open field with the hare having a head start of about a hundred yards. A judge following by horseback would award points for a dog turning the hare back, cutting it off, or catching it—although often the long-eared target escaped without bloodshed. The dogs wore collars of red or white; the judge signaled points with corresponding colored hankies. Coursing was a betting game as well. Spectators and owners wagered on the matches, and the coursing park usually took five percent of the bets made to raise stakes for prize purses.

The practice of coursing goes back to antiquity, but rose in popularity as a sport in Britain in the Nineteenth Century. In some ways coursing was a poor man's version of thoroughbred racing mixed with fox hunting. Dogs bred and raised by "leashmen" to be competitive coursers were a lot cheaper to feed and house than horses.

The Ingleside Coursing Park opened April 27, 1896. The Ingleside Racetrack, an opulent venue for thoroughbred racing, had opened up the road just six months earlier and the coursing men saw an opportunity to attract larger crowds. Both facilities made Ocean Avenue a very attractive place for gambling sportsmen. Horse races took place on Saturdays and the coursing matches on Sundays. Saloons and illegal gambling halls sprung up between the two locations.

As with racehorses, names of competing canines were often poetic and infused with grandeur—Duke of Oak Grove, Count of Monte Cristo, Black Prince. Many recognized the homeland of the primarily Irish owners: Lass o' Gowrie, Roscommon, and Connemara. 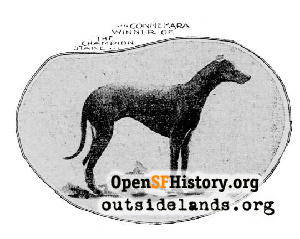 Champion racing hound Connemara got free in Sutro Forest in 1904. -

Connemara was one of the most successful coursing dogs in Ingleside's history. The large black hound was a frequent prizewinner and was worth several thousand dollars to his owner just for breeding. Local sports pages often featured sketches of Connemara's sleek, alert stance for his many admirers. Then, after a race in 1904, Connemara made a successful bid for freedom. The swift hound broke away from his handler, sprinted off the Ingleside Coursing Park grounds, and dove into Sutro Forest, which at the time reached from the Inner Sunset all the way over Mount Davidson. A desperate but unsuccessful search was made. Connemara was gone.

A few months later, a pack of about forty wild dogs started terrorizing the neighborhood. Apparently Sutro Forest's wandering mongrels now had Connemara for a leader. In brazen late night runs, the dogs slaughtered fowl at Larsen's Chicken Ranch (17th Avenue and Noriega Street in the Sunset District), and took out a number of peacocks in Golden Gate Park. City officials worried that Connemara's fine racing blood would mix with the wild hounds to create a race of super dogs. (And you thought we had problems with coyotes.)

As the Ingleside area matured into a true residential neighborhood in the early twentieth century, protests arose against the Ingleside Coursing Park. Today, it would be easy to imagine animal lovers aghast—concerns of animal cruelty finally had the sport banned in the United Kingdom in 2004—but the main complaints of the early 1900s were over unruly crowds and the perceived taint gambling had on women and children.

Miss F. Caley of 311 Faxon Avenue complained to the Board of Supervisors in 1904 that drunken men crowded the streetcars with dogs, she was ashamed to have friends visit her, and church attendees often were forced to walk through crowds of intoxicated men. (That the matches were traditionally held on Sunday only made it worse to the religious.) One of the supervisors agreed, saying he had heard women were in the habit of betting and losing money their husbands had given them for household expenses.

There was a class issue at play as well. Coursing fans were generally working-class Irish (the facility also played host to Gaelic Games and tournaments). Local residents who shrugged off the horseracing crowds were less tolerant of the leashmen and their followers. As one neighbor of the course explained in protest, "The ladies are admitted free, which induces the poorer class of people to patronize them who cannot afford the horse races."

The Ingleside Coursing Park outlasted its blue-blooded neighbor—the last horse race at Ingleside Racetrack was in December 1905—but it finally succumbed to the pressure from neighbors and anti-gambling groups and closed for good in 1910.

Note: Since a newspaper columnist made the mistake in the 1920s, many have believed the Ingleside Coursing Park was traceable in the oval streets of Westwood Park. The oval of Urbano Drive in Ingleside Terraces does follow the old horse track, but coursing didn't follow a loop and the course was farther to the east.