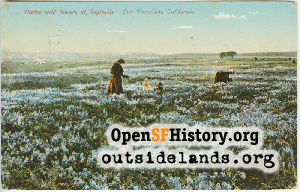 In the mid-1800s, Ocean Avenue was a dirt road in the countryside, used by those who came for recreational purposes both innocent and illegal. Some came to pick the amazing fields of wild flowers (shown in the old postcard at right); others came to pick horses and dogs at the gambling tracks. Despite the fact that the City Jail itself stood on the road, slightly disreputable businesses along the Ocean Road included boxing camps, shooting ranges, bars, and a roadhouse that gave the neighborhood a name.

In the 1870s Cornelius Staggs opened the "Ingleside Inn" on the southeast corner of today's Ocean Avenue and Junipero Serra Boulevard. Staggs was well-known for running the Ocean View Racing and Driving Park farther west on Ocean Road, where San Francisco's most famous horse race had taken place in 1873. A typical roadhouse in its services---food, drink, lodging, and perhaps a card game or two to join---the Ingleside Inn had a genteel Swiss Chalet look to it. So popular was Staggs' business that he had to erect a new, larger building and the surrounding area came to be called "Ingleside." 1

Except for the businesses along Ocean Road, the area surrounding the Ingleside Inn was still mostly small farms with a paltry population. In 1890 Adolph Sutro, who owned most of the land immediately north and south of Ocean, attempted to change that with a promoted subdivision he called "Lakeview".

Sutro did his best to pump up enthusiasm for potential home-buyers, calling the humble Ocean Road "the Grand Ocean Boulevard," and pointing out that Lakeview was "the only site in San Francisco having a marine and bay view." 2 He put out detailed line drawings showing street improvements and tree-plantings. Lakeview evidently wasn't a roaring success, however. When realtor/developer A.S. Baldwin wrote a report on Sutro's estate in May 1910 he reported that "no streetwork of any kind had been done around these blocks", that the neighborhood consisted "principally of modest and inexpensive cottages" and that empty lots in the vicinity were "held at from $400 to $500 each, but there is little demand for them at present." Baldwin had hopes that the residence park plans for the recently-bought Ingleside Racetrack would help. A panoramic photo he took of the area showed that Sutro's planned street trees never happened either. 3

Better transportation options, increased demands for housing, and the rising popularity of nearby developments such as Ingleside Terraces and Westwood Park finally brought the people out to Ingleside. The gambling dens on Ocean Avenue made way for pharmacies, grocers, 5-and-10 stores and other neighborhood services. The dog track became reservoirs, the jail became City College, and entertainment options moved to more innocent vices such as movies and ice skating.

"Lakeview" as a name stangely migrated over the hill, with many of today's Ocean View residents calling their neighborhood by that moniker.