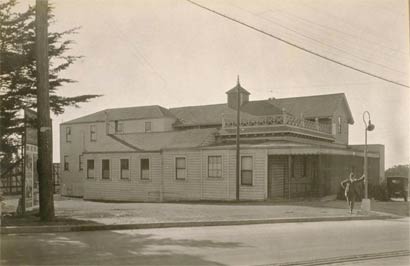 When police officer Jesse Brown Cook took this photograph of himself on the southeast corner of Ocean and Junipero Serra, the old Ingleside Inn had been replaced by a gas station, but the building essentially was intact.

In the margin of his scrapbook, Mr. Cook remembered how the Inn's owner died: "About 20 years ago the Proprietor, Mr. Stagg,[sic] was murdered in this house." Staggs was robbed and killed by the rumored "Bicycle Bandit" who was never apprehended. The thief got his nickname because the only clue he left behind were bicycle tire tracks in the dust of the road.