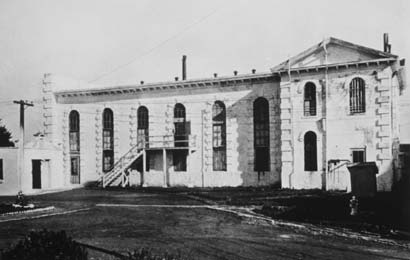 For decades, San Francisco County incarcerated prisoners in the old Ingleside Jail near Ocean and Phelan on the "House of Refuge lot", where City College now stands. A youth correctional "school" and then a women's jail went up first, with the men's 400-bed facility coming later.

As you might expect for the times, the jails were not terribly comfortable. In 1908, reformers protested that paired-up prisoners shared cells just 6 feet long, 4-and-a-half feet wide, and 6'6" high. The city graft trials in the aftermath of the 1906 Earthquake and Fire found a number of prominent San Franciscan politicians, including the Mayor, spending time at the old Ingleside Jail.

It wasn't until 1934, when a new facility opened in San Bruno, that the Ingleside Jail closed. The land was granted to City College in 1936, and CCSF began operations on the site in 1940.