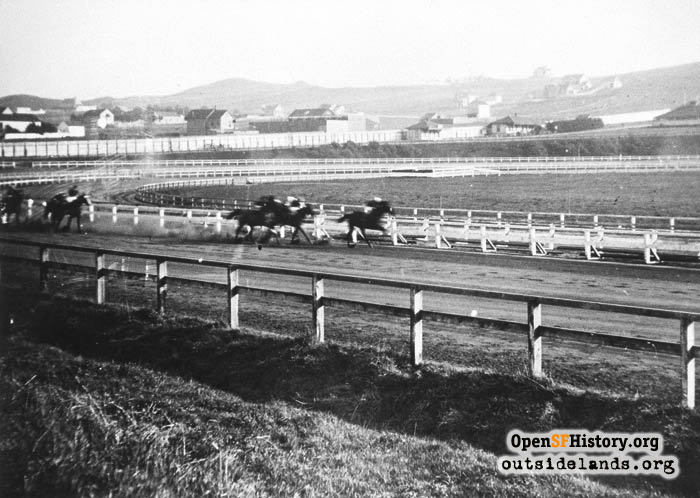 Fourth in a series on west side racetracks.

Race Tracks Of The West Side

In the Lake Merced parking lot at the south end of Sunset Boulevard is a statue of a man on a horse. The man represents Juan Bautista de Anza, the Spaniard who founded San Francisco in 1776. The horse is just a horse, of course, but the location of the horse's statue is historically significant for two reasons. On November 2, 1769, five years before Anza's colonists arrived in San Francisco, a small scouting party led by Sergeant Jose Ortega left the Portola expedition and traveled on the hard, wet sands of Ocean Beach, crossing into what would become San Francisco. This marked the arrival of the horse in San Francisco.

One hundred years later, less than a furlong from today's statue of a horse and rider, the first of the west side's horse racing venues opened for business.

This is the history of those race tracks. 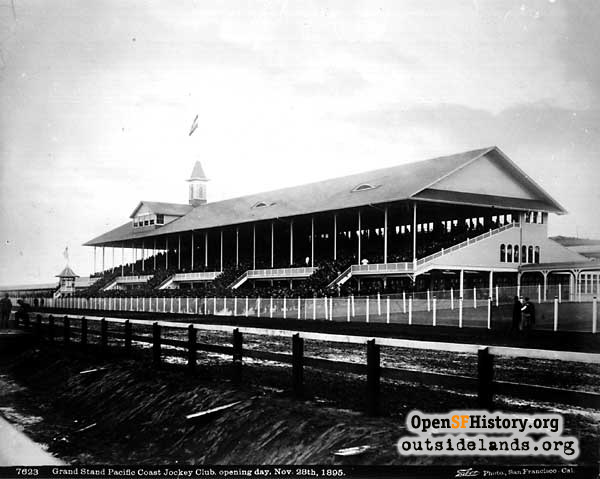 Thanksgiving Day, November 28, 1895. Twelve thousand people braved defective transportation facilities and a steady rain to witness opening day at Ingleside, San Francisco's newest race track. Many more would have been present, but 14,000 elected to watch the Cal and Stanford football teams play to a 6-6 tie at the Haight Street Grounds.

In hindsight, these problems were harbingers of the Ingleside race track's star-crossed future.

Following the closure of the Bay District in 1896, the Ingleside Track was the only race course in San Francisco, but it still had competition from Tom Williams. This rivalry would define its brief history. When the fate of the Bay District Track became obvious, Williams secured the 24-year-old Oakland Trotting Park. He demolished the entire facility, determined to make the rebuilt track the finest track west of the Rocky Mountains.

The East Bay course was located in an unincorporated area of Alameda County which permitted gambling. But when an anti-gambling movement arose in the county, Williams countered by creating the city of Emeryville: 1,200 acres surrounding his race track, populated by people employed by the track or dependent on it for their livelihood. Not surprisingly the citizens of Emeryville voted to allow gambling.

This would have profound implications for Ingleside.

The San Francisco and East Bay tracks abided by an agreement to alternate their racing schedules. However, two years after Tom Williams had created Emeryville and assured that betting on horse races would not be impeded at his track, an anti-gambling movement infiltrated the San Francisco Board of Supervisors.

On March 6, 1899, the Supervisors voted 10-2 to pass an ordinance which prohibited betting on horse or dog races. On March 13, 1899, Mayor James Phelan signed the ordinance into law. In a historical irony, Mayor Phelan's father, James Phelan, Sr., was one of the original contributors to the Bay District Course a quarter century earlier.

Horse racing wasn't banned, but betting on horses was. The effect was the same. Without being able to bet on the races, there was no point in holding the races. Racing ended at the Ingleside Track on March 15, 1899.

In a very complicated maneuver, though, the operation was moved to San Mateo County and a new track, Tanforan, was built to compete with Tom Williams.

By Admission Day, 1900, a new type of racing appeared at the Ingleside track: horseless racing. Automobiles were a novelty in San Francisco at the turn of the century and a race between horseless carriages drew 8,000 thoroughly entertained spectators who witnessed the west coast's first automobile race. In the trial heats steam-powered "locomobiles" out-classed the gasoline-powered vehicles. The winning automobile was driven by the gloriously named M. Rockett, who won the two-mile final in a near-dead-heat with another steamer driven by E.A. Boeseke. The winning time was 2:09. M. Mousehardt, also driving a steamer, was third. 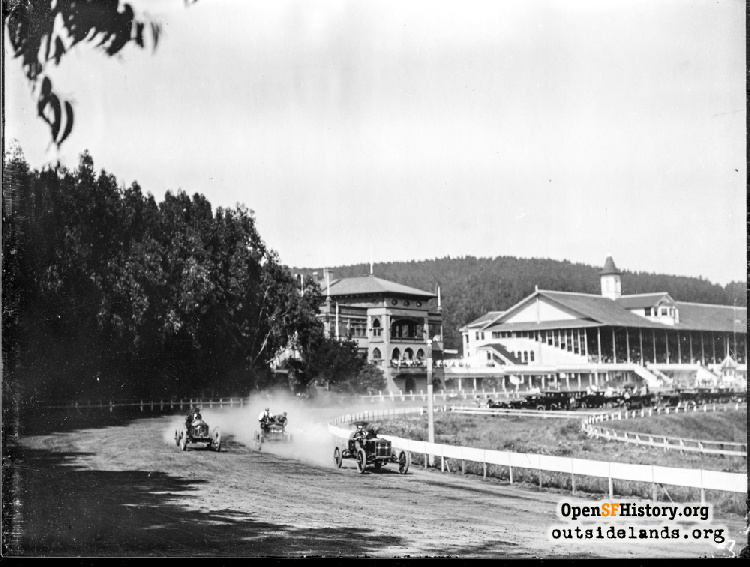 [27] Early auto race; Ingleside Racetrack Clubhouse and Grandstand behind, circa 1908 -

In February, 1901, in a battle of petitions, San Francisco citizenry presented their views to the Board of Supervisors on the gambling issue. Four thousand affixed their names to a petition to keep the track closed, while 10,000 had signed a pro-track, pro-gambling petition. On February 25, the Supervisors voted 11-7 to allow 36 racing days at Ingleside. It was announced that Ingleside would reopen on March 16, 1901.

Eight thousand racing fans thronged to Ingleside for the first time in two years, but it would be for only one day of racing rather than thirty-six.

Mayor Phelan had quietly, almost secretly, vetoed the ordinance. Nobody knew of his veto until the Mayor called the Chief of Police just as the races were to begin, ordering him to close the track. The police arrived as the last race was about to run.

On August 17, 1902, with horse racing still illegal at the Ingleside track, the automobiles returned to tear up the oval. This time "motor-bicycles" were added to the program. Automobile races of one to ten miles came off without incident, although some in the crowd half expected to see one of the "infernal machines jump the fence." On what was described as a slow track, the winning time in the special mile dash was 2:02, much slower than the absent thoroughbreds' times for a circuit of the track.

A month after the automobiles toured the Ingleside, the gambling issue heated up again at City Hall. A bill was introduced that would allow forty days of racing and betting at the track. On September 29, 1902, the Board of Supervisors voted on the gambling measure. But now the track was owned by Tom Williams, who had recently bought the Ingleside and Tanforan tracks, giving him a monopoly on horse racing in the Bay Area.

The Supervisors passed the gambling ordinance by 12-5, allowing forty days of gambling, i.e. racing, at the Ingleside track. Mayor Eugene Schmitz signed the racing bill into law the following week.

After an absence of almost four years, horse racing returned to Ingleside on November 15, 1902 when 6,000 people witnessed a horse named Corrigan win the Opening Handicap.

Tom Williams generously granted San Francisco forty-three days of racing before shifting to his Emeryville course on January 3, 1903. During the 1902-03 racing season, Ingleside hosted 63 days while Emeryville was open for 80 days.

The return of horse racing and gambling notwithstanding, over the next three years more noise and news was generated at Ingleside by horseless carriages than by horses. The legendary Barney Oldfield, King of Automobile Drivers, arrived at Ingleside with his racing machines for a two-day exhibition of speed on November 7 and 8, 1903. Just three years after the first automobile race in San Francisco, 4,000 incredulous spectators witnessed Oldfield win a 10-mile race by a half-lap margin in the incredible time of 11 minutes and an average speed of 54 miles per hour.

In 1904-05 there was no horse racing at Ingleside, but bicyclists raced for three days in September.

The 1905-06 thoroughbred racing season began in Emeryville on November 10, 1905 and then shifted to Ingleside on December 11, 1905 for eighteen days of racing concluding on Saturday, December 30, 1905. On a rainy day, on a muddy track, Hanault finished last in the day's final race. The remainder of the 1905-1905 meeting was to be run at Emeryville.

The 1906 earthquake sealed the contentious on-again, off-again fate of the Ingleside Track.

It's the only race track to leave a legacy: the oval shape of Urbano Drive.

Read more about Ingleside Racetrack on this page and this page.

Next: Speed Road and Polo Grounds