Did the salt water sports innovator start in Santa Cruz or San Francisco?

Jack O'Neill's origins as an innovator in salt water sports:
Who has bragging rights San Francisco or Santa Cruz?
Who cares? Well, some remember and it matters.

Recently posted (9/16/11) to the Stoke Report was a video about Jack O'Neill, innovative local originator of water sports and outdoor gear: Rant - First In, Last Out

The video spawned a discussion among some old time Ocean Beach surfers about keeping history straight. At two minutes and twenty nine seconds into the video O'Neill's early surf shops appear without identifying that his first shop in the early/mid 1950's was near the Great Highway where he influenced a good number of early saltwater dogs. The only clue to O'Neill's Outside Lands connection is caught quickly on footage of his sail-powered tricycle as it zips along Ocean Beach with Mount Tamalpais and Inverness Ridge set against a blue sky. The sail is stenciled: 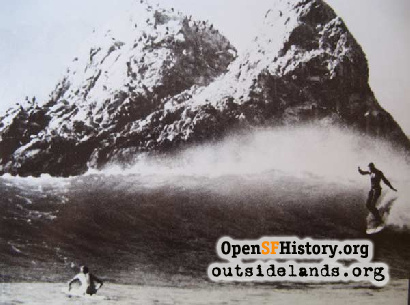 The early part of this video recalled an email discussion a few weeks back between San Francisco natives Dennis O'Rorke and Jim Gallagher where Jim commented about buying one the first two boards that O'Neill sold commercially. A pair of boards were produced: one for Jim and the other went to a guy he thinks was named Phil Guerrero. Jim's description of the nascent surfing scene at Kelly's Cove in the 1950s includes this incident. At the time the San Francisco Police Department harassed and busted surfers who dared ride waves south of the Lurline pipeline pier at the foot of Balboa Street. Jim recalls that Phil Guerrero was one of two guys he once saw chased down and arrested at the shoreline near the VFW (Veterans of Foreign Wars clubhouse then operating out of the Beach Chalet building) for "swimming" and endangerment. How crazy was that? Jim believes the charges in this instance were dropped, but it was part of trend in those times to harass and suppress board riding along Ocean Beach. 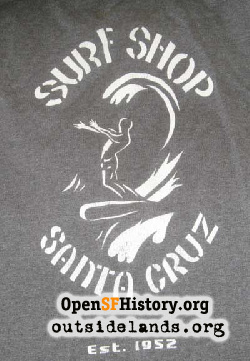 Gary Silberstein who surfed Ocean Beach in the late '50s through mid 60's noticed the omitted San Francisco reference of O'Neill's first shop and writes, "...and, it grinds my gears that the O'Neill tee-shirts with the original Jim Foley wave are printed (I can barely write this) "Surf Shop Santa Cruz est. 1952”!!! My Stan Ross model surf mat was purchased at Surf Shop SAN FRANCISCO, in '56. There weren't no dang Surf Shop in Santa Cruz, O'Neill or otherwise in 1952." Gary supplied this photo of the O'Neill tee shirt he's referring to.

Jim Gallagher writes, "Gary is absolutely correct. I bought the first surfboard that he (O'Neill) sold commercially. And at that time Jack was living on Sloat Boulevard near the beach and his shop was in the back of the Hitchrack Bar on Wawona near Sloat. There is an apartment complex in that location today. Other names of early San Francisco surfers include Ted Pearson, who learned to surf at Pedro Point in the late 30s. Ted's picture, surfing the point, is in Doc Ball's Surfing book published in 1939. Ted was 7 at the time of the photo shoot. Ted was taught by Bud Prior, his brother-in-law."

Rudy Funk, another Avenues kid who in the '60s and early '70s avidly surfed local breaks south from Ross's Cove up to Point Reyes, writes, "I was just a kid when I first walked into O'Neill's Surf shop on Wawona street. I was in awe. Didn't surf then. The next surf shop I walked into was that of Bill Hickey. I was hooked and equally in awe."

Polishing off old memories Glenn Schot writes from the north shore of Kaua'i, "Yes, I visited O'Neill's Surf Shop as a young kid in late '50's. It was a small shop front draped with fishnets and a paddle board behind a gravely/sand parking area with some dry bushes. I thought it was on the "Lower" Great Highway… as I remember, could be wrong. I got my first wet suit at "Aquagear" on 2nd Avenue near California Street. It was a custom job, but cut an inch too tight all over so when I got to Kelly's Cove (it was a perfect fall day) I couldn't fit in it and had to go out "naked" to the cold.

Schot continues, "I got my first surfboard from Hal Satler—he had made it in Hawaii sometime in the '50s and it had "Primo" stickers on it. He took $40 on a "Time Plan." I paid a couple of dollars a week—I was like 13. That was before anybody or anything became something…the Stone Age. Hal was the greatest surfer of that era. He opened a shop with Bill Hickey at 47th & Judah Street. Hal shaped boards with a wooden block (Japanese) plane…razor sharp, this was before electric planers. Bill glassed. Bill gave me a job laying up FG fins. Hal taught me and Bill to shape."

Jack O'Neill.
Who has bragging rights to the first surf shop owned by this innovator of surfing and active engagement with the forces of nature, San Francisco or Santa Cruz? Ocean Beach, man.
O-C-E-A-N B-E-A-C-H!