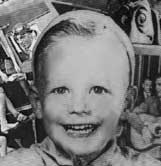 Ron Jones, raised on 46th Avenue in the Sunset during the 1940s and 50s, hasn't forgotten his roots. And while some of us may share our memories with children or grandchildren, Ron does his best to let the world know what it was like to be a San Francisco boy in a different time.

"It was the era of Eisenhower. So there was this primness, and neatness to life in the Sunset. Every lawn was cut the same. People behaved pretty much the same. We played on the streets a lot. My whole childhood was spent on the street. [...] All the families would sit outside."

Blessed with parents who did a terrific job of chronicling their lives, Ron has shared his childhood films and photos in a series of videos. Wonderful sights of life in San Francisco over the last fifty years accompany Ron's stories in "Jitterbuggin'", "Laughing Sal" and "Mint Jammin'".

Living at 46th Avenue offered him a wealth of recreational opportunities. He remembers the early surfing scene at Kelly's Cove below the Cliff House and creating "skidboards" to ride the retreating waves. Ron would cut school to swim at Sutro Baths or at Fleishhacker Pool whenever it was sunny.

"[Before television] we had things that put us outside the house. The Hot House, for instance, was down at the beach, and our family would go once a week to have enchiladas. Playland was at the beach, and as a child I would walk two or three times a week to be around Playland, to be around Laughing Sal. To get into the fun house for a dime. Our lives were exciting because they were outside mixing with people, they weren't inside."

Son of vaudeville entertainers, Ron creates his own theater as a spoken word and performance artist. Through his performances he shares his memories of being a boy in San Francisco, a teenager at Lincoln High School, an activist in the Vietnam era, and his present life as a father, husband and grandfather in frank and moving ways.

The author of over 30 books, Ron may actually be best known as the teacher who created a high school classroom experiment in facism called The Wave. In Germany, his telling of that story is required reading in many schools.

Outside of his family, and perhaps San Francisco itself, Ron's great love is his work at the Recreation Center for the Handicapped. He's well known for organizing the famous basketball games that take place between Rec Center regulars and teams from all communities.

Thanks for sitting down with us Ron!

Do you have some connection to the western neighborhoods? Contact us to arrange an interview, and save those memories for posterity!